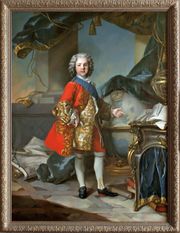 Louis de France at 9 in a study with a globe and a fortification treatise, by Louis Tocqué.

Louis's birth secured the throne and his mother's position at court, which previously had been precarious due to her giving birth to three daughters in a row before the birth of the Dauphin. He had a younger brother, Philippe, who died as a toddler.

Louis was baptised privately and without a name by Cardinal Armand de Rohan. On 27 April 1737 when he was seven years old the public ceremony of the other baptismal rites took place. It was at this point that he was given the names Louis Ferdinand. His godparents were his cousin Louis, Duke of Orléans and his great-grandaunt the Dowager Duchess of Bourbon.

Louis' governess was Madame de Ventadour who had previously served as his father's governess. When he was seven years old, the Duke of Châtillon was named his governor, the Count of Muy was named under-governor, and Jean-François Boyer, formerly bishop of Mirepoix, was named preceptor.

From an early age Louis took a great interest in the military arts. He was bitterly disappointed when his father would not permit him to join the 1744 campaign in the War of the Austrian Succession. When his father became deathly ill with fever at Metz, Louis disobeyed orders and went to his bedside. This rash action, which could have resulted in the deaths of both Louis and his father, resulted in a permanent change in the relations between father and son. Until then, Louis XV had doted on his son, but now the relationship was more distant. He was very close to his three older sisters.

In 1744 Louis XV negotiated a marriage between his fifteen-year-old son and the nineteen-year-old Infanta Maria Teresa Rafaela of Spain, daughter of King Philip V and his Italian wife, Elisabeth Farnese, and first cousin of Louis XV. The marriage contract was signed 13 December 1744; the marriage was celebrated by proxy at Madrid 18 December 1744 and in person at Versailles 23 February 1745. 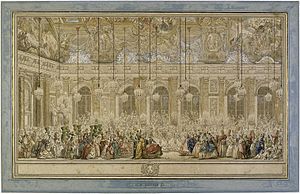 Louis and Maria Teresa Rafaela were well-matched and had a real affection for each other. They had one daughter, Princess Marie Thérèse of France (19 July 1746 – 27 April 1748). Three days after the birth of their daughter, Louis's wife, Maria Teresa Rafaela, died on 22 July 1746. Louis was only 16 years old. He grieved intensely at the loss of his wife, but his responsibility to provide for the succession to the French crown required he marry again quickly.

In 1746, Louis received the Order of the Golden Fleece from his father-in-law, King Philip V of Spain.[2]

On 10 January 1747, Louis was married by proxy at Dresden to Maria Josepha of Saxony, the 15-year-old younger daughter of Frederick Augustus II, Prince-Elector of Saxony and King of Poland, and his wife Archduchess Maria Josepha of Austria. A second marriage ceremony took place in person at Versailles on 9 February 1747.

Louis was well-educated: a studious man, cultivated, and a lover of music, he preferred the pleasures of conversation to those of hunting, balls, or spectacles. With a keen sense of morality, he was very much committed to his wife, Marie-Josèphe, as she was to him.

Very devout, he was a fervent supporter of the Jesuits, like his mother and sisters, and was led by them to have a devotion to the Sacred Heart. He appeared in the eyes of his sisters as the ideal of the Christian prince, in sharp contrast with their father, who was a notorious womanizer. 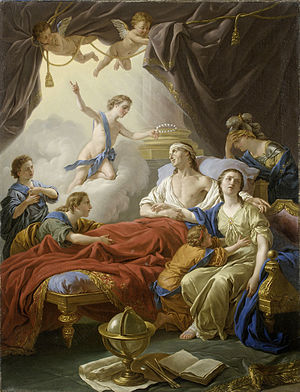 Allegory on the Death of the Dauphin by Louis-Jean-François Lagrenée, 1765.

Kept away from government affairs by his father, Louis was at the center of the Dévots, a group of religiously-minded men who hoped to gain power when he succeeded to the throne.

Louis died of tuberculosis at Fontainebleau in 1765 at the age of 36, while his father was still alive, so he never became king of France. His mother, Queen Marie Leszczyńska, and his maternal grandfather, the former king of Poland, Stanislaus I Leszczyński, Duke of Lorraine, also survived him. His eldest surviving son, Louis-Auguste, duc de Berry, became the new dauphin, ascending the throne as Louis XVI at the death of Louis XV, in May 1774.

File:2012--DSC 0253-Cénotaphe-du-grand-Dauphin-par-Coustou-dans-la-cathedrale-de-Sens.jpg
The Tomb of Louis, Dauphin of France & Marie-Josephe of Saxony, in Sens Cathedral. Started by Coustou and finished by Julien.

Louis was buried in the Cathedral of Saint-Étienne in Sens at the Monument to the Dauphin of France & Marie-Josephe of Saxony, designed and executed by Guillaume Coustou, the Younger. His heart was buried at Saint Denis Basilica.