Alexandre was born on 20 February 1753 at Versailles[1] to Lieutenant-Colonel Jean Baptiste Berthier (1721 – 1804), an officer in the Corps of Topographical Engineers, and first wife (married in 1746) Marie Françoise L'Huillier de La Serre. He was the eldest of five children, with the three brothers also serving in the French Army, two becoming generals during the Napoleonic Wars.[2]

As a boy he was instructed in the military art by his father, an officer of the Corps de genie (Engineer Corps), and at the age of seventeen he entered the army, serving successively in the staff, the engineers and the prince de Lambesq's dragoons. In 1780 he went to North America with Rochambeau, and on his return, having attained the rank of colonel, he was employed in various staff posts and in a military mission to Prussia. During the Revolution, as Chief of Staff of the Versailles National Guard, he protected the sisters of Louis XVI from popular violence, and aided their escape (1791).[1]

In the war of 1792 he was at once made Chief of Staff to Marshal Lückner, and he bore a distinguished part in the Argonne campaign of Dumouriez and Kellermann. He served with great credit in the Vendéan War of 1793–1795, and was in the next year made a general of division and chief of staff (Major-Général) to the army of Italy, which Bonaparte had recently been appointed to command. He played an important role in the Battle of Rivoli, relieving Barthélemy Joubert when the latter was attacked by the Austrian general Jozsef Alvinczi. His power of work, accuracy and quick comprehension, combined with his long and varied experience and his complete mastery of detail, made him the ideal chief of staff to a great soldier; and in this capacity he was Napoleon's most valued assistant for the rest of his career.[1] 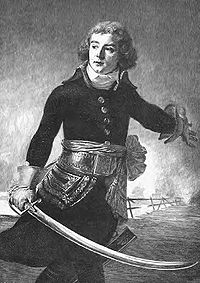 Marshal Berthier was Napoleon's Chief of Staff from the start of his first Italian campaign in 1796 until his first abdication in 1814. The operational efficiency of the Grande Armée owed much to his considerable administrative and organizational skills.

He accompanied Napoleon throughout the brilliant campaign of 1796, and was left in charge of the army after the Treaty of Campo Formio. He was in this post in 1798 when he entered Italy, invaded the Vatican, organized the Roman republic, and took the pope Pius VI as prisoner back to Valence (France) where, after a torturous journey under Berthier's supervision, the pope died, dealing a major blow to the Vatican's political power which, however, did not prove as ephemeral as that of the First Empire. After this he joined his chief in Egypt, serving there until Napoleon's return. He assisted in the coup d'état of 18 Brumaire (9 November 1799), afterwards becoming Minister of War for a time. In the campaign of Marengo he was the nominal head of the Army of Reserve, but the first consul accompanied the army and Berthier acted in reality, as always, as Chief of Staff to Napoleon.[1]

Lest one think this was a relatively safe job, such as modern staff officers, a contemporary subordinate staff officer, Brossier, reports that at the Battle of Marengo:

The General-in-Chief Berthier gave his orders with the precision of a consummate warrior, and at Marengo maintained the reputation that he so rightly acquired in Italy and in Egypt under the orders of Bonaparte. He himself was hit by a bullet in the arm. Two of his aides-de-camp, Dutaillis and La Borde, had their horses killed.[3]

At the close of the campaign he was employed in civil and diplomatic business.[1] This included a mission to Spain in August, 1800, which resulted in the retrocession of Louisiana to France by the Treaty of San Ildefonso, 1 October 1800, and led to the Louisiana Purchase.[citation needed]

When Napoléon Bonaparte deposed King Frederick William III of Prussia from the principality of the canton of Neuchatel, Berthier was appointed its Governor. It lasted until 1814 and also brought him the title of sovereign prince. 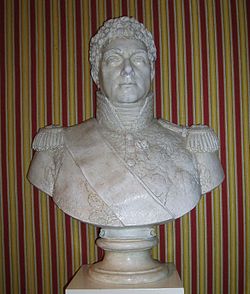 Bust of Louis-Alexandre Berthier in the Chateau de Chambord.

When Napoleon became emperor, Berthier was at once made a marshal of the empire. He took part in the campaigns of Austerlitz, Jena and Friedland, and was created Duke of Valengin in 1806, Sovereign Prince of Neuchâtel in the same year and Vice-Constable of the Empire in 1807. In 1808 he served in the Peninsular War, and in 1809 he served in Austrian theatre during War of the Fifth Coalition, after which he was given the title of prince of Wagram. He was with Napoleon in Russia in 1812, Germany in 1813, and France in 1814, fulfilling, till the fall of the French Empire, the functions of "major-general" of the Grande Armée.[1]

Following Napoleon's first abdication, Berthier retired to his 600-acre (2.4 km²) estate, and resumed his hobbies of falconry and sculpture.[citation needed] He made peace with Louis XVIII in 1814, and accompanied the king on his solemn entry into Paris. During Napoleon's short exile on Elba, he informed Berthier of his projects. Berthier was much perplexed as to his future course and, being unwilling to commit to Napoleon, fell under the suspicion both of his old leader and of Louis XVIII. On Napoleon's return to France, Berthier withdrew to Bamberg, where he died a few weeks later on 1 June 1815 in a fall from an upstairs window. The manner of his death is uncertain; according to some accounts he was assassinated by members of a secret society, others say that, maddened by the sight of Prussian troops marching to invade France, he threw himself from his window and was killed.[1]

Berthier was not a great field commander. When he was in temporary command in 1809, the French army in Bavaria underwent a series of reverses. His merit as a general was completely overshadowed by the genius of his emperor, he is nevertheless renowned for his excellent organising skills and being able to understand and carry out the emperor's directions to the minutest detail.[1]

On 9 March 1808 Berthier married Duchess Maria Elisabeth in Bavaria (Landshut, 5 May 1784 – Paris, 1 June 1849), only daughter of Duke Wilhelm in Bavaria and Countess Palatine Maria Anna of Zweibrücken-Birkenfeld-Rappolstein,[4] the sister of King Maximilian I Joseph of Bavaria. They had one son and two daughters :[5][6]