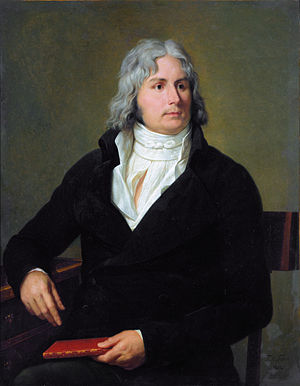 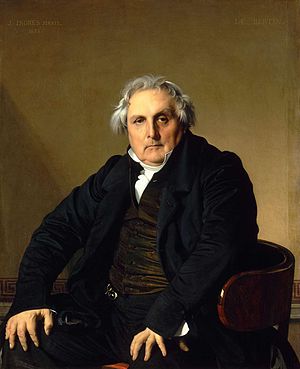 Born in Paris (his father was a former secretary of Étienne François, duc de Choiseul), and considered in retrospect the most important member of the Bertin family, he began his journalistic career by writing for the Journal Français and other papers during the French Revolution. After Napoleon Bonaparte's 18 Brumaire Coup he acquired the paper with which the name of his family has chiefly been connected, the Journal des Débats.[1] Guided by the contributions of figures such as Joseph Fiévée, Julien Louis Geoffroy, Jean François Joseph Dussault, François-René de Chateaubriand, Charles-Marie-Dorimond de Féletz, Jean François Boissonade de Fontarabie, Conrad Malte-Brun, François Benoît Hoffmann, and Charles Nodier, the Journal soon became a major authority in French press and literature. Bertin is credited with the invention of the feuilleton, a supplement to the political section of a newspaper, usually in smaller type, which carried gossip, fashion, criticism, epigrams and charades, and which fostered a culture of literary gamesmanship.

Suspected of royalist tendencies by the French Consulate, he was imprisoned at the Temple in 1800, and exiled in 1801. Bertin returned to Paris in 1805 after the proclamation of the Empire, and resumed the management of the paper, the title of which had been changed by order of Napoleon to that of Journal de l'Empire. He had to submit to a rigorous censorship, and in 1811 the conduct, together with the profits, was taken over entirely by the government.[1]

In 1814 he regained possession, restored the old title, and continued his support of the royalist cause during the Hundred Days, joining Louis XVIII in the Southern Netherlands, where he edited the Moniteur Universel as Moniteur de Gand.[1]

Back with the full Bourbon Restoration, Bertin directed the Moniteur until 1823, when the Journal des Débats became the recognized organ of the liberal-constitutional opposition after he had come to criticize absolutism (a road similar to the one taken by François-René de Chateaubriand). Bertin's support was, however, given to the July Monarchy after 1830. He died in Paris, 1841.[1]

Jean Auguste Dominique Ingres' portrait of Bertin (1832), first exhibited at the 1833 Paris Salon, is today one of the most famous works by the painter.