Louis-Nicolas d'Avout (10 May 1770 – 1 June 1823), better known as Davout, 1st Duke of Auerstaedt, 1st Prince of Eckmühl, was a French general who was Marshal of the Empire during the Napoleonic era. His talent for war along with his reputation as a stern disciplinarian, earned him the title "The Iron Marshal". He is ranked along with Masséna and Lannes as one of Napoleon's finest commanders.[1] His loyalty and obedience to Napoleon were absolute. During his lifetime, Davout's name was commonly spelled Davoust, which is how it appears on the Arc de Triomphe and in much of the correspondence between Napoleon and his generals (see external links below for examples).

Davout was born at Annoux (Yonne), the son of Jean-François d'Avout (1739 – 1779) and his wife (married in 1768) Françoise-Adélaïde Minard de Velars (1741 – 1810).[2]:4 He was educated at a military academy in Auxerre, before transferring to the École Militaire in Paris on 29 September 1785.[3] He graduated on 19 February 1788 and was appointed a sous-lieutenant in the Royal-Champagne Cavalry Regiment[3] in garrison at Hesdin.[4]:94 On the outbreak of the French Revolution, he embraced its principles. He was chef de bataillon in a volunteer corps in the campaign of 1792, and distinguished himself at the Battle of Neerwinden the following spring. He had just been promoted to general of brigade when he was removed from the active list because of his noble birth. He nevertheless served in the campaigns of 1794-1797 on the Rhine, and accompanied Desaix in the Egyptian Expedition of Napoleon Bonaparte.[5]

Although on his return he did not take part in the Battle of Marengo, where his friend Desaix was killed while making a decisive contribution to the victory.[2]:65 Napoleon, who had great confidence in his abilities finally promoted him to general de division and arranged his marriage to his sister Pauline's sister-in-law Aimée Leclerc, thus making him part of Napoleon's extended family, and gave him a command in the consular guard. At the accession of Napoleon as emperor, Davout was one of the generals who were created marshals of France. Davout was the youngest and least experienced of the generals promoted to Marshal, which earned him the hostility of other generals throughout his career. As commander of the III Corps of the Grande Armée, Davout rendered his greatest services. At the Battle of Austerlitz, after a forced march of forty-eight hours, the III Corps bore the brunt of the allies' attack. In the subsequent War of the Fourth Coalition, Davout with a single corps fought and won the Battle of Auerstädt against the main Prussian army,[5] which had more than twice as many soldiers at its disposal (more than 63,000, to Davout's 28,000). Historian François-Guy Hourtoulle writes: "At Jena, Napoleon won a battle he could not lose. At Auerstädt, Davout won a battle he could not win".[6] 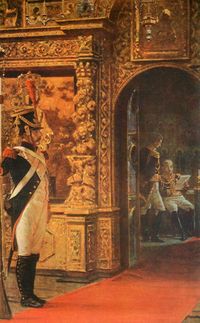 As a reward, Napoleon let Davout and his men enter first in Berlin on the 25th of October 1806.

Davout added to his renown in the campaign of Eylau and Friedland. Napoleon left him as governor-general of the newly created Duchy of Warsaw following the Treaty of Tilsit of 1807, and the next year created him Duke of Auerstädt. In the war of 1809, Davout took part in the actions which culminated in the Battle of Eckmühl, and also distinguished himself in the Battle of Wagram, where he commanded the right wing. He was created Prince of Eckmühl following this campaign. He was entrusted by Napoleon with the task of organizing the "corps of observation of the Elbe", which would become the gigantic army with which Napoleon invaded Russia in 1812. In this, Davout commanded the I Corps, numbering over 70,000, and defeated the Russians at Mohilev before he joined the main army, with which he continued throughout the campaign and the retreat from Moscow. During the retreat he conducted the rear guard, which was deemed too slow by the Emperor, and was replaced by Ney. His inability to hold out at Berezina until the arrival of Ney and his corps, led him into disgrace and he would not meet with the Emperor again until his return from Elba. In 1813 he commanded the Hamburg military district, and defended Hamburg, a poorly fortified and provisioned city, through a long siege, only surrendering on the direct order of the new King Louis XVIII, who had come to the throne after the fall of Napoleon in April 1814.[5]

Davout's military character has been interpreted as cruel, and he had to defend himself against many attacks upon his conduct at Hamburg. He was a stern disciplinarian, who exacted rigid and precise obedience from his troops, and consequently his corps was more trustworthy and exact in the performance of its duty than any other. For example, Davout forbade his troops from plundering enemy villages, a policy he would enforce by the use of the death penalty. Thus, in the early days of the Grande Armée, the III corps tended to be entrusted with the most difficult work. He was regarded by his contemporaries as one of the ablest of Napoleon's marshals. On the first restoration he retired into private life, openly displaying his hostility to the Bourbons, and when Napoleon returned from Elba, Davout rejoined him.[5]

Appointed minister of war, he reorganized the French army insofar as time permitted, and he was so indispensable to the war department that Napoleon kept him in Paris during the Waterloo campaign. To what degree his skill and bravery would have altered the fortunes of the campaign of 1815 can only be surmised, but Napoleon has been criticized for his failure to avail himself in the field of the services of the best general he then possessed. However this is countered with the fact that he was the only possible candidate who had not sworn loyalty to the Bourbons and thus had the integrity his role as Minister of War required. Davout directed the gallant, but hopeless, defence of Paris after Waterloo, and was deprived of his marshalate and his titles at the second restoration. When some of his subordinate generals were proscribed, he demanded to be held responsible for their acts, as executed under his orders, and he endeavoured to prevent the condemnation of Michel Ney. After a time the hostility of the Bourbons towards Davout faded, and he became reconciled to the monarchy. In 1817 his rank and titles were restored, and in 1819 he became a member of the Chamber of Peers.[5]

In 1822, Davout was elected mayor of Savigny-sur-Orge, a position he held for a year. His son Louis-Napoléon was also mayor of the city from 1843 to 1846. A main square bears their name in the city, as does a boulevard in Paris.[7][8] 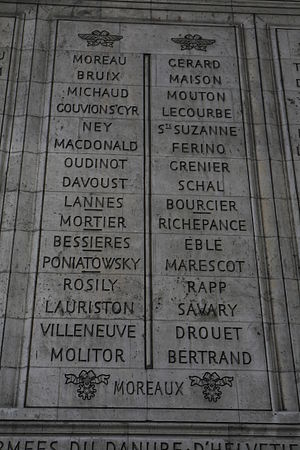 He held the following honours and awards:[citation needed]

Davout was known as a methodical person in both military and personal affairs. Within the army and among his social peers, he was often considered cold and distant; while respected, he was not well-liked. During times of peace, he preferred to spend time with his family and care for his home, rather than cultivate his high social standing.[citation needed]

Because of his stubborn personality and limited social skills, he developed many enemies and antagonists within the army's officer corps, notably Jean-Baptiste Bernadotte, Joachim Murat (with whom he clashed strongly during the 1812 campaign), Louis-Alexandre Berthier and Baron Thiébault (who would harshly criticize Davout in his memoirs).[citation needed] 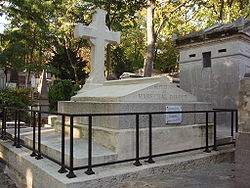 Tomb of Marshal Davout at Pere Lachaise in Paris

Perhaps his fiercest anger was directed towards Bernadotte, who failed to come to his aid at Auerstadt, though close enough to observe the smoke and hear the cannon fire.[citation needed] His anger was so intense that Davout requested to settle the matter with a personal duel, averted only by Napoléon's personal intervention. Bernadotte was eventually sent back to Paris in disgrace after being caught by Napoleon retreating without orders at the battle of Wagram. Bernadotte then caught the eye of the Swedish ambassador, looking for a well-connected French officer to take on the role of heir to the Swedish throne. When Sweden threw in their lot against Napoleon in the War of the Sixth Coalition, Davout personally asked to be placed opposite Bernadotte's contingent, in order to teach him a lesson once and for all. But with Davout assigned to defend Hamburg (which he did, up to and beyond Napoleon's abdication), they never did face each other in battle.[citation needed]

Of the other Marshals, Davout had the best relations with Michel Ney, Nicolas Charles Oudinot and Laurent Gouvion Saint-Cyr. His best friend was possibly Charles-Étienne Gudin de La Sablonnière, one of his subordinates, who was killed in battle in 1812.[citation needed]

Davout was also noted for his loyalty to his long-time second wife [9] Louise Aimée Julie Davout (née Leclerc, sister of Charles Leclerc and sister-in-law of Pauline Bonaparte) (Pontoise, 19 June 1782 – Paris, 17 December 1868), whom he married in 1801 and who remained with him until his death. Their marriage was loving and, most notably, the couple seem to have been faithful to each other despite very long periods of separation. They had eight children, four of whom died in childhood:[citation needed]