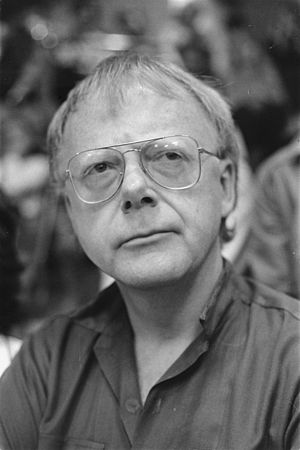 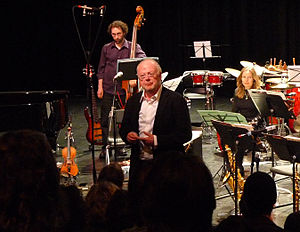 Louis Andriessen at the Roundhouse, Vancouver

Louis Andriessen (Dutch pronunciation: [luˈi ˈɑndrisə(n)]; born 6 June 1939) is a Dutch composer and pianist based in Amsterdam. He was a composition teacher at the Royal Conservatory of The Hague. He was recipient of the Gaudeamus International Composers Award in 1959.

Andriessen originally studied with his father and Kees van Baaren at the Royal Conservatory of The Hague, before embarking upon two years of study with Italian composer Luciano Berio in Milan and Berlin. He later joined the faculty of the Royal Conservatory. See: List of music students by teacher: A to B#Louis Andriessen.

In 1969 Andriessen co-founded STEIM in Amsterdam. He also helped found the instrumental groups Orkest de Volharding and Hoketus, both of which performed compositions of the same names. He later became closely involved in the ongoing Schonberg and Asko ensembles and inspired the formation of the British ensemble Icebreaker.

Andriessen's early works show experimentation with various contemporary trends: post war serialism (Series, 1958), pastiche (Anachronie I, 1966–67), and tape (Il Duce, 1973). His reaction to what he perceived as the conservatism of much of the Dutch contemporary music scene quickly moved him to form a radically alternative musical aesthetic of his own. Since the early 1970s he has refused to write for conventional symphony orchestras and has instead opted to write for his own idiosyncratic instrumental combinations, which often retain some traditional orchestral instruments alongside electric guitars, electric basses, and congas.

Andriessen's mature music combines the influences of jazz, American minimalism, Igor Stravinsky and Claude Vivier.[2] His harmonic writing eschews the consonant modality of much minimalism, preferring post war European dissonance, often crystallised into large blocks of sound. Large scale pieces such as De Staat ['Republic'] (1972–76), for example, are influenced by the energy of the big band music of Count Basie and Stan Kenton and the repetitive procedures of Steve Reich, both combined with bright, clashing dissonances. Andriessen's music is thus anti-Germanic and anti-Romantic, and marks a departure from post war European serialism and its offshoots. He has also played a role in providing alternatives to traditional performance practice techniques, often specifying forceful, rhythmic articulations, and amplified, non-vibrato, singing.

Other notable works include Workers Union (1975), a melodically indeterminate piece "for any loud sounding group of instruments"; Mausoleum (1979) for 2 baritones and large ensemble; De Tijd ['Time'] (1979–81) for female singers and ensemble; De Snelheid ['Velocity'] (1982–83), for 3 amplified ensembles; De Materie ['Matter'] (1984–88), a large four-part work for voices and ensemble; collaborations with filmmaker and librettist Peter Greenaway on the film M is for Man, Music, Mozart and the operas Rosa: A Horse Drama (1994) and Writing to Vermeer (1998); and the recent La Passione (2000–02) for female voice, violin and ensemble.

For Andriessen's notable students, see List of music students by teacher: A to B#Louis Andriessen.