From Infogalactic: the planetary knowledge core
Jump to: navigation, search
For other uses of "Louis, Dauphin", see Louis, Dauphin (disambiguation).

Louis Antoine of France, Duke of Angoulême (6 August 1775 – 3 June 1844) was the eldest son of Charles X of France and, from 1824 to 1830, the last Dauphin of France. Due to his father's abdication during the July Revolution in 1830, he never reigned over France but after his father's death in 1836 he was the legitimist pretender as Louis XIX.

A petit-fils de France at birth, he was initially known as Louis Antoine d'Artois. After his father's accession to the throne, he became fils de France, and his surname changed to de France, following the royal custom for princes with such rank.[1]

Louis Antoine was born at Versailles, as the eldest son of Charles Philippe, Count of Artois, the youngest brother of King Louis XVI of France. He was born one year after the death of his great-grandfather Louis XV of France. His mother was Princess Maria Theresa of Savoy (known as Marie Thérèse in France), the daughter of Victor Amadeus III of Sardinia and Maria Antonietta of Spain.

From 1780 until 1789, Louis Antoine and his younger brother, Charles Ferdinand, Duke of Berry, were educated by Armand-Louis de Sérent marquis de Sérent, their gouverneur, in the château de Beauregard, a few miles from Versailles.[2] On the outbreak of the French Revolution in 1789 the two young princes followed their father into exile to first Turin, then to Germany and finally England.

In 1792, Louis Antoine joined the émigré army of his cousin, the Prince of Condé.

In June 1795, his uncle, the comte de Provence proclaimed himself King Louis XVIII. Later that year, the 20-year-old Louis-Antoine led an unsuccessful royalist uprising in the Vendée. In early 1797, he joined his brother and uncle in the German Duchy of Brunswick, hoping to join the Austrian Army. The defeat of Austria by France obliged them to flee, and they took refuge in Mittau, Courland, under the protection of Tsar Paul I of Russia.

There, on 10 June 1799, he married his first cousin, Princess Marie Thérèse of France, the eldest child of Louis XVI and Marie Antoinette, and the only member of the immediate royal family to survive the French Revolution. Since her release from the Temple Prison in 1795, she had been living at the Austrian court. They had no children.

In April 1800, Louis Antoine took command of a regiment of cavalry in the Bavarian army and took part in the battle of Hohenlinden against the French, showing some ability.

In early 1801, Tsar Paul made peace with Bonaparte, and the French court in exile fled to Warsaw, then controlled by Prussia. For the next ten years, Louis-Antoine accompanied and advised his uncle, Louis XVIII. They returned to Russia when Alexander I became Tsar, but in mid-1807 the treaty between Napoleon and Alexander forced them to take refuge in England. There, at Hartwell House, King Louis reconstituted his court, and Louis-Antoine was granted an allowance of £300 a month. Twice (in 1807 and 1813) he attempted to return to Russia to join the fight against Napoleon, but was refused permission by the Tsar. He remained in England until 1814 when he sailed to Bordeaux, which had declared for the King. His entry into the city on 12 March 1814 was regarded as the beginning of the Bourbon restoration. From there, Louis Antoine fought alongside the Duke of Wellington to restore his cousin Ferdinand VII to the throne of Spain.

Flight to England and return 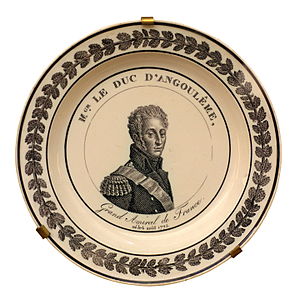 Faience plate celebrating the Duke of Angoulême as Admiral of France. On display at the Musée national de la Marine, Paris.

As chief of the royalist army in the southern Rhône River valley, Louis Antoine was unable to prevent Napoleon's return to Paris and was again forced to flee to England during the "Hundred Days". After the final defeat of Napoleon at Waterloo, he loyally served Louis XVIII. In 1823, he commanded a French corps sent into Spain to restore the King's absolute powers, known as the Hundred Thousand Sons of Saint Louis: he was victorious in the Battle of Trocadero, after which the reactionary power of King Ferdinand VII of Spain was firmly restored. For this achievement, he was awarded the title of a Prince of Trocadero.

Upon the King's death in 1824, his father became King Charles X and Louis-Antoine became Dauphin, heir-apparent to the throne. He supported his father's reactionary policy of purging France of her recent revolutionary and imperial past, expelling former imperial officers from the Army. 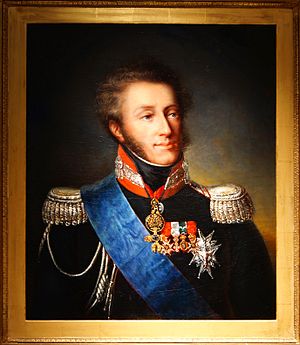 Abdication of father and son

In July 1830, in what became known as the July Revolution, masses of angry demonstrators demanded the abdication of Charles and of his descendants, in favour of his cousin Louis Philippe, Duke of Orléans, and sent a delegation to the Tuileries Palace to force his compliance.

Charles reluctantly signed the document of abdication on 2 August 1830; Louis Antoine followed 20 minutes later. It is said that Louis Antoine spent this time listening to the entreaties of his wife not to sign, while the former Charles X sat weeping. After that he also abdicated (in favour of his nephew, the Duke of Bordeaux). For the final time he left for exile, where he was known as the "Count of Marnes". He never returned to France.

Louis Antoine and his wife travelled to Edinburgh, Scotland, in November 1830 and took up residence in a house in Regent Terrace near Holyrood Palace where Charles X was staying.[3]

Emperor Francis I of Austria in 1832 offered the Prague Castle in Prague to the royal entourage so Louis-Antoine and Charles X moved there. Francis I, however, died in 1835, and his successor Ferdinand I of Austria told the French royal family he needed the palace for his coronation in the summer of 1836.[3] The exiled French kings and their entourage therefore left and eventually arrived at the castle of Graffenberg in Gorizia on 21 October 1836.[3]

Many legitimists did not recognize the abdications as valid, and recognized Charles X as king until his death in 1836, with Louis XIX succeeding him thereafter. Louis Antoine died in Görz, Austria, in 1844, aged 69. He was buried in his father Charles X's crypt in the church of the Franciscan monastery of Kostanjevica near Görz, now Nova Gorica, Slovenia. Upon his death, his nephew the Duke of Bordeaux, who would use in exile the title of Count of Chambord, became head of the royal family of France under the regnal name Henri V.

In fiction and film

The newborn Duke of Angoulême is portrayed by an uncredited child actor in a brief scene from the Sofia Coppola motion picture Marie Antoinette. This scene contains a great error as it mistakenly names his parents as being Louis XVIII and Marie Josephine Louise of Savoy, who never had children.