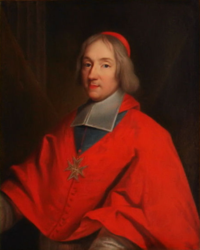 Louis-Antoine de Noailles bearing the cross of the Order Spiritus.

Noailles received his doctorate in theology from the Sorbonne on 14 March 1676. He was appointed bishop of Cahors in March 1679 but served only briefly before Pope Innocent XI ordered him transferred in 1680 to head the diocese of Châlons-sur-Marne, which made him a peer of France. On 19 August 1695, in recognition of Noailles's family connections, King Louis XIV made him archbishop of Paris and duc de Saint-Cloud, and in 1700 Pope Innocent XII made him a cardinal.

"Lacking in brilliant qualities", according to the Catholic Encyclopedia, "he was possessed of piety, zeal, and activity." [1] He is noted for having raised money to feed famine victims by selling his silver tableware in 1709, and for having spent a considerable part of his inheritance on redecorating Notre Dame.

Noailles was a friend of François Fénelon, with whom he had studied at the Collège du Plessis before entering the Sorbonne. Nonetheless, he was among the bishops who condemned Fénelon's Maximes des Saints, ending the theologian's career.

Noailles came to know the controversial young Lutheran Count Nicholas Ludwig von Zinzendorf in 1719 during the young man's Grand Tour. The two found great spiritual connection despite their historic denominational differences. They maintained a relationship and correspondence the rest of Noailles' life; and Noailles became a member of Zinzendorf's Order of the Grain of Mustard Seed, a secret society where nobles and church leaders committed to work together to build the spiritual Kingdom of God.[1]

Noailles had a complex relationship with the Jansenists; while he condemned their propositions, more orthodox theologians saw in his own teachings hints of Jansenism, and Noailles was an opponent of the Jesuits in their attacks on the sect. His position on Pope Clement XI's 1713 bull Unigenitus was also controversial; he opposed it, despite papal disapproval, up to 1728 but then abruptly reversed himself shortly before his death.

He was succeeded as archbishop of Paris and duc de Saint-Cloud by Charles-Gaspard-Guillaume de Vintimille du Luc.