Louis Armand de Bourbon, Prince of Conti (10 November 1695[1] – 4 May 1727) was Prince of Conti, from 1709 to his death, succeeding his father François Louis, Prince of Conti. As a member of the reigning House of Bourbon, he was a Prince du Sang. His mother was Marie Thérèse de Bourbon, a grand daughter of Louis de Bourbon, le Grand Condé. He was nominated as the Prince of Orange by Louis XIV in 1712.

His male line descendants died out in 1814; through his daughter however, he is an ancestor of the present-day pretenders to the throne of France and Italy and the kings of Spain and Belgium and the Grand Duke of Luxemburg.

Born at the Palace of Versailles, he was one of seven children born to his parents and their only son to live past the age of 5. At the age of 8 on 30 June 1704 he was baptised. Held at Versailles, the ceremony, Louis XIV had Mary of Modena as the guest of honour; Mary was the widow of the exiled James II of England.

Louis was often described as being "hideous"; he was humpbacked and very unattractive.[citation needed]

At the age of 13 his father died in Paris (9 February 1709) and Louis Armand succeeded to the Conti title and wealth, although there was no real principality. On 1 January 1711, Louis Armand was made a knight of the Order of the Holy Spirit.

The event, also took place at Versailles and was part of a double marriage; on the same day his oldest sister Marie Anne de Bourbon married Louis Henri de Bourbon, known as the Duke of Bourbon.

In the end, Louise Élisabeths brother Charles even proposed to Charlotte Aglaé who is said to have considered the proposal but refused. Charlotte Aglaé herself married the Duke of Modena in 1720 in the presence of Louis Armand and Louis Élisabeth.

The marriage of Louis Armand and Louise Élisabeth would later become stormy.[citation needed] 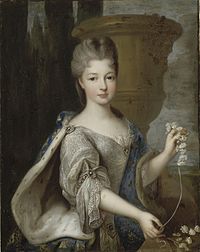 Louise Élisabeth was known to have been unfaithful to her husband, a liaison with the handsome Philippe Charles de La Fare was well known at court. In August 1716, Louis Armand caught Smallpox; it was Louise Élisabeth who would nurse him until his recovery. Louise Élisabeth later caught the illness herself but survived the disease.

It was at this time that Louis Armand found out about Louise Élisabeth's affair with Monsieur de La Fare. He is reported to have hurt his wife to the point that she had to see a doctor on two separate occasions.[citation needed] Louise Élisabeth stayed at the Palais Bourbon which was her mothers private home in Paris. She also stayed at a convent in the capital. At the birth of their second son in 1717, Louis Armand said to her that he did not care for the child as he could not have been his; in turn, the proud Louise Élisabeth replied that she did not care for the child either because he was his.[3]

Louise Élisabeth and Louis Armand had to go to many court hearings in Paris. In 1725, she consented to return to the Prince of Conti, who had her confined to the Château de l'Isle-Adam. She was able later, however, to convince him to allow her to return to Paris in order to give birth to her daughter. It was while in Paris she gave birth to their only daughter Louise Henriette.

He was treated with great liberality by Louis XIV of France, and also by the Regent the Duke Philippe II, Duke of Orléans. Louis Armand was a prominent supporter of the financial schemes of John Law, by which he made large sums of money.

It was during the Regency of 1715 - 1723, Louis Armand was appointed a member of the Regency council itself as well as a member of the Council of War. In April 1717 he received the government of the Poitou region of France. This appointment came with a wage of 45,000 Livres.

He served under Marshal Villars in the War of the Spanish Succession, but he lacked the soldierly qualities of his father.

Louis Armand died at the Hôtel de Conti in Paris due to a "chest swelling".