Louis I, Duke of Orléans

Louis was the second son of King Charles V of France and Joanna of Bourbon and was the younger brother of Charles VI.[1] In 1498, his heirs male inherited the French throne after the extinction of the Valois main line.

Succession in Hungary, Poland and Naples

In 1374, Louis was betrothed to Catherine, heir presumptive to the throne of Hungary. 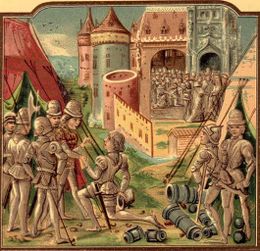 Louis in the camp in front; in the background, Sigismund marries Mary

Louis and Catherine were expected to reign either over Hungary or over Poland, as Catherine's father, Louis I of Hungary, had no sons. Catherine's father also planned to leave them his claim to the Crown of Naples and the County of Provence, which were then held by his ailing and childless cousin Joanna I.[2] However, Catherine's death in 1378 ended the marriage negotiations. In 1384, Elizabeth of Bosnia started negotiating with Louis' father about the possibility of Louis marrying her daughter Mary, notwithstanding Mary's engagement to Sigismund of Luxembourg. If Elizabeth had made this proposal in 1378, after Catherine's death, the fact that the French king and the Hungarian king did not recognise the same pope would have presented a problem. However, Elizabeth was desperate in 1384 and was not willing to let the schism stand in the way of the negotiations. Antipope Clement VII issued a dispensation which annulled Mary's betrothal to Sigismund[citation needed] and a proxy marriage between Louis and Mary was celebrated in April 1385.[3] Nonetheless, the marriage was not recognised by the Hungarian noblemen who adhered to Pope Urban VI. Four months after the proxy marriage, Sigismund invaded Hungary and married Mary, which ultimately destroyed Louis' chances to reign as King of Hungary.[4]

Role in court and the Hundred Years' War 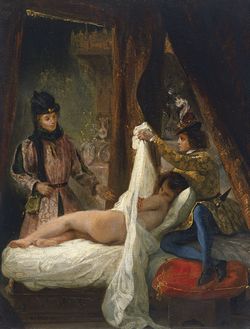 Louis played an important political role during the Hundred Years' War. In 1392, his elder brother Charles the Mad (who may have suffered from either schizophrenia, porphyria, paranoid schizophrenia or bipolar disorder) experienced the first in a lifelong series of attacks of 'insanity'. It soon became clear that Charles was unable to rule independently. In 1393 a regency council presided over by Queen Isabeau was formed, and Louis gained powerful influence.

Louis disputed the regency and guardianship of the royal children with John the Fearless, Duke of Burgundy. The enmity between the two was public and a source of political unrest in the already troubled France. Louis had the initial advantage, being the brother rather than the first cousin of the king, but his reputation as a womanizer and the rumour of an affair with the queen consort Isabeau of Bavaria made him extremely unpopular. For the following years, the children of Charles VI were successively kidnapped and recovered by both parties, until the Duke of Burgundy managed to be appointed by royal decree to be the guardian of Louis, the Dauphin and regent of France.

Louis did not give up and took every effort to sabotage John's rule, including squandering the money raised for the relief of Calais, then occupied by the English. After this episode, John and Louis broke into open threats and only the intervention of John of Valois, Duke of Berry and uncle of both men, avoided a civil war.

Louis was reportedly responsible for the deaths of four dancers at a disastrous 1393 masquerade ball that became known as the Bal des Ardents (Ball of the Burning Men). The four victims were burnt alive when a torch held by Louis came too close to their highly flammable costumes. Two other dancers wearing the same costumes (one of whom was Charles VI himself) narrowly escaped a similar fate.

Main article: Assassination of Louis I, Duke of Orléans 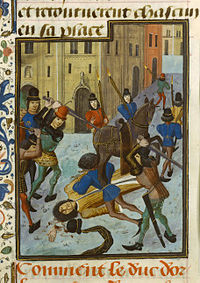 On Sunday, 20 November, 1407, the contending Dukes exchanged solemn vows of reconciliation before the court of France. But only three days later, Louis was brutally assassinated in the streets of Paris, by the orders of the Duke of Burgundy John the Fearless. Louis was stabbed while mounting his horse by fifteen masked criminals led by Raoulet d'Anquetonville, a servant of the Duke of Burgundy.[5] An attendant was severely wounded. 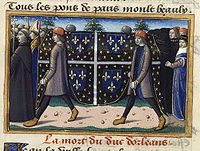 John was supported by the population of Paris and the University. He could even publicly admit the killing. Rather than deny it, John had the scholar Jean Petit of the Sorbonne deliver a peroration justifying the killing of tyrants.

Louis' murder sparked a bloody feud and civil war between Burgundy and the French royal family which divided France for the next twenty-eight years, ending with the Treaty of Arras in 1435.

By Mariette d'Enghien,[8] his mistress, Louis had an illegitimate son: 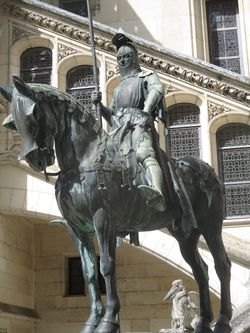 Statue of Louis d'Orléans in the courtyard of Château de Pierrefonds, by Frémiet.