Lodewicus Theodorus "Louis" Oosthuizen (/ˈluːiː ˈwʊst.haɪzən/; Afrikaans pronunciation: [ˈlu.i ˈoəst.ɦœjzən];[3] born 19 October 1982) is a South African professional golfer who won the 2010 Open Championship and has finished runner-up in a further three major championships: the 2012 Masters Tournament losing in a sudden death playoff, the 2015 U.S. Open, and the 2015 Open Championship where he was defeated in a four-hole aggregate playoff. His highest placing on the Official World Golf Ranking is fourth which he achieved in January 2013.[4]

Oosthuizen was born in Mossel Bay, South Africa. His early career was supported financially for three years by the foundation of fellow South African golfer Ernie Els.[5] He won numerous amateur titles before turning professional in 2002 at the age of 19. 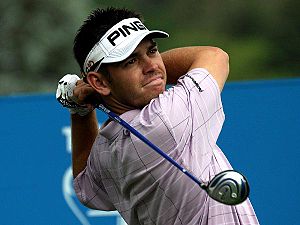 Oosthuizen at the 2008 Telkom PGA Championship

He has won five professional tournaments on the Sunshine Tour: the 2004 Vodacom Origins of Golf Tour event at Arabella, the 2007 Dimension Data Pro-Am and Platinum Classic, and the Telkom PGA Championship twice, in 2007 and 2008.

He played on the European Challenge Tour in 2003 and has been a member of the European Tour since 2004. In 2009, he finished 31st on the Race to Dubai. On 10 September 2012 he reached the top 10 of the Official World Golf Ranking for the first time in his career.

Oosthuizen entered the 2010 Open Championship at St Andrews ranked 54th in the Official World Golf Ranking,[8] and only having made one cut in eight major championship appearances.[9] He shot a 65 on the first day, placing him in second place, behind a 63 shot by Rory McIlroy.[10]

Oosthuizen's 67 on Friday was the low round of the day[10] and gave him a lead that he would not relinquish throughout the final two rounds.[11] His two-day total of 132 tied the record for the lowest 36-hole score in an Open Championship at St Andrews.[12] A 69 on Saturday placed Oosthuizen at 15-under-par, and four shots clear of second-place Paul Casey with one round to play.[13]

On Sunday, Casey closed the gap to three shots on the 8th hole, before Oosthuizen drove the 9th green and made a long putt for eagle.[14] On the 12th hole, Oosthuizen made birdie, while Casey hit his drive into a gorse bush, and wound up making triple bogey to give Oosthuizen an eight-shot lead.[14][15] In the end, Oosthuizen shot 71 on Sunday, and 16-under-par 272 for the championship, to win by seven strokes. His 272 was the second lowest in St Andrews history. Casey eventually finished third with Lee Westwood taking second.

Oosthuizen claims his exemplary focus during the tournament, which enabled him to win by a wide margin, was due to a red spot marked on his glove. He would look at that spot as the beginning of his pre-shot routine and use it to help him remain focused before and during his swing. Oosthuizen had consulted Karl Morris, a Manchester-based sports psychologist, prior to the event for ways in which he could improve his concentration.[18]

Oosthuizen finished the 2010 season in 10th place on the Race to Dubai, posting three further top-10s after his major win. In January 2011, he claimed his third European Tour title, and his sixth in his home country, winning the Africa Open in a playoff.[19] In 2012, Oosthuizen successfully defended his title at the Africa Open with a two stroke victory over Tjaart van der Walt. His success was helped by a second round 62, which took Oosthuizen to the top of the leaderboard at the halfway stage and from there he held on for victory.[20]

Oosthuizen was runner-up at the 2012 Masters Tournament. In the final round, he scored an albatross on the second hole of Augusta National Golf Club. This was only the fourth ever albatross in Masters history, and the first to be televised, as well as the first ever on that hole. Oosthuizen took the outright lead of the tournament with this exceptional shot, and maintained the lead until caught on the 16th hole, by Bubba Watson. He was eventually defeated by Watson on the second hole of a sudden-death playoff.[21] The following week he won his fifth European Tour title at the Maybank Malaysian Open.

In the second event of the 2012 PGA Tour FedEx Cup Playoffs, the Deutsche Bank Championship, Oosthuizen held the 54-hole lead by three strokes and came close to his first victory on US soil, finishing second to Rory McIlroy by one shot.

On 10 September 2012, he reached the top 10 of the Official World Golf Ranking for the first time in his career. He finished the season ranked third on the Race to Dubai.

In January 2014, he retained the Volvo Golf Champions title by one shot over Branden Grace.[23]

Oosthuizen finished as a joint runner-up in the 2015 Open Championship at St Andrews after losing in a four-hole aggregate playoff during a Monday finish to the event. He was in the final group tied for the 54-hole co-lead but needed to birdie the 18th hole during his final round to tie the lead at 15-under and join Zach Johnson and Marc Leishman in the playoff. In the four-hole playoff, he birdied the first hole alongside Johnson, but could not convert his birdie putt on the second hole, giving Johnson a one-stroke advantage. All three players bogeyed the third hole and after Johnson missed his birdie putt on the final hole, Oosthuizen had a 15 footer to extend the playoff to sudden death. However his putt caught the lip on the low side and he finished at even-par, one stroke behind Johnson. This was Oosthuizen's second consecutive runner-up placing in a major championship, following the 2015 U.S. Open. 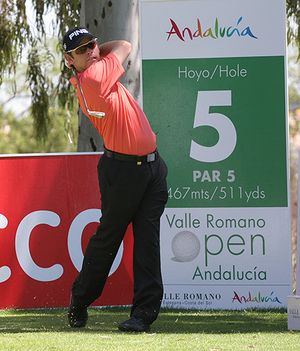 Oosthuizen at the 2007 Valle Romano Open at the Aloha Golf Club, Marbella, Spain

1 Co-sanctioned by the European Tour