Louis Philippe I, Duke of Orléans

Louis Philippe d'Orléans known as le Gros (the Fat) (12 May 1725 – 18 November 1785), was a French prince, a member of a cadet branch of the House of Bourbon, the dynasty then ruling France. The First Prince of the Blood after 1752, he was the most senior male at the French court after the immediate royal family. He was the father of Philippe Égalité. He greatly augmented the already huge wealth of the House of Orléans.

Louis Philippe d'Orléans was born at the Palace of Versailles on 12 May 1725. As the only son of Louis d'Orléans, Duke of Orléans and his wife Johanna of Baden-Baden, he was titled Duke of Chartres at birth. He was one of two children; his younger sister Louise Marie d'Orléans died at Saint-Cloud in 1728 aged a year and eight months. His father, who had been devoted to his German wife became a recluse and pious as he grew older.

Louise Marie was known as Mademoiselle in her short lifetime.

Louis Philippe was hardly fifteen when he and his young cousin Princess Henriette of France (1727–1752), the second daughter of King Louis XV and Queen Marie Leszczyńska, fell in love.

After considering the possibility of such a marriage, Louis XV and his chief minister, Cardinal Fleury, decided against it because this union would have brought the House of Orléans too close to the throne.[1]

In 1743, his paternal grandmother, Françoise-Marie de Bourbon the formidable Dowager Duchess of Orléans, and Louise Élisabeth, Dowager Princess of Conti arranged his marriage to his seventeen-year-old cousin, Louise Henriette de Bourbon (1726–1759), a member of the House of Bourbon-Conti, another cadet branch of the House of Bourbon. It was hoped this marriage would close a fifty-year-old family rift.

Louis Philippe's father, Louis le Pieux, gave his consent to the union in the belief that because the young bride had been brought up in a convent, she would be a paragon of virtue and as such be an ideal wife for his son. Louise Henriette was the only daughter of Louis Armand de Bourbon, Prince of Conti and the earlier mentioned Louise Élisabeth de Bourbon. Louise Henriette was a Princess of the Blood (princesse du sang) and was known at court as Mademoiselle de Conti.

The couple was married on 17 December 1743 in the chapel of the Palace of Versailles.

After a few months of a passion that surprised everyone at court, the couple started to drift apart as the young Duchess of Chartres began to lead a scandalous life. This caused her father-in-law to refuse to recognise the legitimacy of his grandchildren.[2]

The couple had three children: 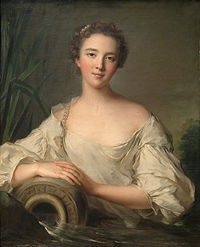 Louise Henriette as the Duchess of Chartres, Jean-Marc Nattier.

Because he knew that Louise Henriette was having affairs during her marriage and felt that Louis Philippe was physically incapable of having children, Louise Henriette's father-in-law refused to acknowledge any of her children as legitimate.[4]

Military achievements and succession as Duke of Orléans

Serving with the French armies in the War of the Austrian Succession, he distinguished himself in the campaigns of 1742, 1743 and 1744, and at the Battle of Fontenoy in 1745. After the death of his first wife, he retired to his château at Bagnolet, where he occupied his time with theatrical performances and the society of intellectuals. Louise Henriette accompanied her husband to the field despite being pregnant.

Upon the death of his father in Paris on 4 August 1752, Louis Philippe became Duke of Orléans and head of the House of Orléans. He also became First Prince of the Blood, Duke of Valois, Nemours and Montpensier. His father was buried at the Abbaye-Sainte-Geneviève where he had lived since 1740. 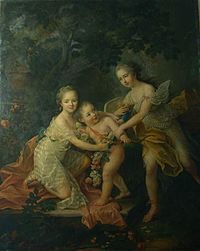 Children of the Duke of Orléans (c.1755); Bathilde holds an angel with her brother, the Duke of Chartres, is on the far right, François-Hubert Drouais.

After the death of Louise Henriette on 9 February 1759 at the Palais-Royal, the Orléans residence in Paris, Louis Philippe took as his mistress Étiennette Le Marquis, a former dancer who liked to act in comedy plays, and who introduced him into the world of the theater. At that time, the château de Bagnolet, which he had inherited from his father, became his favorite residence.[5] Louis Philippe had three children with Étiennette;[6] they were raised under the care of the Orléans family:

In 1769, Louis Philippe sold Bagnolet and bought the Château du Raincy, located less than ten miles east from the center of Paris. The same year, his son Louis Philippe, married Louise Marie Adélaïde de Bourbon, heiress to the fortune of her father, the Duke of Penthièvre. Louis Philippe had wanted his son to have a prestigious marriage with the Polish princess Maria Kunigunde, the youngest daughter of Augustus III of Poland and Maria Josepha, Archduchess of Austria. Princess Maria Kunigunde was the sister of the deceased Dauphine of France (1731–1767), mother of Louis XVI.

It was the King Louis XV who opposed this marriage on the pretence that the princess was too old for the young Duke of Chartres. This caused the Duke of Penthièvre to ask if the Duke of Orléans if he would allow a union with the Orléans family. Louis Philippe is said to have rejected the idea of his son marrying Mademoiselle de Penthièvre due to her bastard race; this is an irony in itself due to Louis Philippe and the Duke of Penthièvre were both descended from two daughters of Louis XIV and Madame de Montespan.

In spite of his liaison with Étiennette, Louis Philippe had several other mistresses until he met, in July 1766, Charlotte Jeanne Béraud de La Haye de Riou, Madame de Montesson, a witty but married twenty-eight-year-old. After the death of the Marquis of Montesson in 1769, Louis Philippe tried to obtain Louis XV's authorisation to marry the young widow. Finally, in December 1772, the King gave his consent on the condition that the Marquise of Montesson would never become Duchess of Orléans or succeed to any other Orléans titles. In addition, the couple was to live a quiet life away from the court. The morganatic wedding took place on 23 April 1773 "dans la plus stricte intimité".[7] As a wedding gift, the Duke of Orléans gave his new wife the château de Sainte-Assise at Seine-Port, in today's Seine-et-Marne department of France.

Louis XV had added to the appanage of the House of Orléans the hôtel de Grand-Ferrare in Fontainebleau (1740), the county of Soissons (1751), the seigneuries of La Fère, Marle, Ham, Saint-Gobain, the Ourcq canal and the hôtel Duplessis-Châtillon in Paris (1766).[8]

In 1773, Orléans added to his residences a magnificent hôtel built at Chaussée d'Antin, the new elegant quarter of Paris.

In 1780, Louis Philippe gave his son the Palais-Royal, a gift that was to mark their reconciliation after the rift provoked by the Duke's second marriage.[9]

In Sainte-Assise, Le Raincy and Paris, the couple received nobles, intellectuals, playwrights, scientists, such as the Duchess of Lauzun, the Countess of Egmont, the Marquis of Lusignan, the Marquis of Osmond, the mathematician d'Alembert, the German writer Melchior Grimm, the mathematician and astronomer Pierre-Simon de Laplace, the chemist Claude Louis Berthollet, the composers Pierre-Alexandre Monsigny, Chevalier de Saint-Georges, Wolfgang Amadeus Mozart, and playwright Louis Carrogis Carmontelle. The couple also gave theatrical presentations, some of which were written by the Marquise of Montesson.

In February 1785, upon the insistence of Louis XVI, and with some help from Madame du Barry, the Duke of Orléans sold the magnificent château de Saint-Cloud, which had been in the Orléans family's possession since 1658, to Queen Marie Antoinette, for six million livres, a much reduced price than the original cost. The beautiful château had been ignored after the death of his wife Louise Henriette.

Surrounded by all the members of his immediate family, even his three children by Etiennette Le Marquis, Louis-Philippe died on 18 November 1785, at Sainte-Assise at the age of sixty.[10]

He was buried at the Val-de-Grâce convent in Paris, built by his ancestor Anne of Austria to celebrate the birth of Louis XIV of France, Louis Philippe's great grandfather.