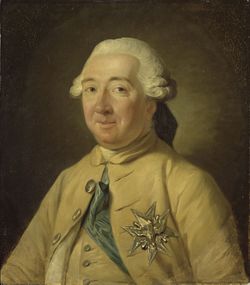 Louis de Noailles, 4th Duke of Noailles (21 April 1713 in Versailles – 22 August 1793 in Saint-Germain-en-Laye) was a French peer and Marshal of France. He was the son of Françoise Charlotte d'Aubigné, niece of Madame de Maintenon, and a nephew of Marie Victoire de Noailles, daughter-in-law of Louis XIV of France.

He bore the title of duc d'Ayen until his father's death in 1766, when he became duc de Noailles. On 25 February 1737 he married Cathérine Françoise Charlotte de Cossé-Brissac, with whom he had four children, two sons and two daughters: John Paul Duc d'Ayen, Adrienne Catherine de Noailles, Emmanuel de Noailles, and Philippine Louise de Noailles. He served in most of the wars of the eighteenth century without particular distinction, but was nevertheless made a Marshal of France in 1775. He refused to emigrate during the Revolution.

The duc's widow, granddaughter, and daughter-in-law were guillotined on 22 July 1794, twenty-five days after the duc's brother and sister, sister-in-law, their daughter-in-law, and niece were guillotined. Another granddaughter, Adrienne, wife of the Marquis de LaFayette, was saved due to the efforts of James Monroe, then America's Minister to France.[2] Adrienne and the Marquis are buried with the Noailles and the other nobles who fell to the guillotine at Picpus Cemetery.

Louis de Noailles was succeeded by his eldest son, Jean de Noailles. The titles remain among the 4th duc's descendants in the 21st century.