From Infogalactic: the planetary knowledge core
Jump to: navigation, search
For the King of France known as Louis the Younger, see Louis VII of France. For the Emperor of that name, see Louis II of Italy.

Louis the Younger (830/835 – 20 January 882), sometimes Louis III,[1] was the second eldest of the three sons of Louis II the German and Emma. He succeeded his father as the King of Saxony on 28 August 876 and his elder brother Carloman as King of Bavaria from 880 to 882. He died in 882 and was succeeded in all his territories, which encompassed most of East Francia, by his younger brother, Charles the Fat, already King of Italy and Emperor.

As a young man, Louis was deployed in military operations against the Abodrites to the east in 858 and 862.[2] In 854, at the invitation of the nobles of Aquitaine opposed to Charles the Bald and Pepin II, and coaxed by his father and his cousin Charles, Archbishop of Mainz, he crossed into Gaul at the head of an army, intent on receiving the Aquitainian crown. He marched as far as Limoges before turning back.

Back home, Louis forged close ties with the nobles of the East Francia and became increasingly independent from his father. He engaged himself to the daughter of Count Adalard and, in 865, he and his brother Charles joined in rebellion against their father. This flirtation with revolt was brief, however, and Louis, Charles, and their father were reconciled later that year, though the elder Louis was forced to make a division of the remainder of his territories between his two sons. Carloman had already been given the subregulus of Bavaria in 864, now Louis received Saxony, Thuringia, and Franconia and Charles Alemannia and Rhaetia.

In 869, Louis married Liutgard, daughter of Liudolf, Duke of Eastphalia, at Aschaffenburg. Luitgard was a strong-willed and politically ambitious woman and later on spurred her husband to pursue ambitious goals. This match increased dissension between father and son and in 871 and in 873, Louis rebelled, but each time he was reconciled.

Upon his father's death in 876, Louis fully inherited his subkingdoms, bearing the title rex Francorum ("king of the Franks"). Louis the Younger considered himself the true heir of Louis the German and as his father died in 876, Louis buried him in the abbey of Lorsch, in his own territories, in order to emphasise his primacy to his brothers. Louis also retained his father's chief advisor, Luitbert, Archbishop of Mainz. He and his brother ruled their kingdoms independently but cooperatively and never at war.

Acquisition of Lotharingia and Bavaria

Louis's rule was immediately threatened by Charles the Bald, who tried to annex the eastern parts of Lotharingia and maybe even to achieve supremacy over his nephew. Louis brought war on Charles and, on 8 October 876 at Andernach, he defeated the much larger host of West Francia with a significantly smaller army. The East Frankish army displayed superiority in both unity and tactics, and the young king had even dressed his soldiers in white garments so that they appeared as an army of dead spirits.

After this victory, Louis the German's three sons met in November at Nördlingen to discuss the division of their father's kingdom and to have their hosts swear allegiance. According to the plan drawn up in 865, which their father, despite all his sons' rebellions, had confirmed in 872, Carloman received Bavaria, Charles Swabia, and Louis Saxony, Franconia, and Thuringia. Throughout his reign, though he is always called "King of Saxony" by historians, he never visited Saxony proper, though it formed the bulk of his territory. At the end of 877, the brothers assembled again to discuss the administration of their half of Lotharingia. After Carloman relinquished his claim, the realm was divided between Louis and Charles, who again met in September 878 in Alsatia. In 879, Carloman was incapacitated by a stroke and partitioned named Louis as his successor (and erstwhile regent) in Bavaria. Louis received it a year later when Carloman expired.

In November 878 after the death of Charles the Bald, his heir, Louis the Stammerer, and the latter's cousin Louis the Younger promised each other to respect the succession of their respective sons and to issue no claims contrary to that, at Voeren (Fourons in French). This Treaty of Fouron was soon put to the test, when Louis the Stammerer died in April 879. A party of western nobles led by Abbot Joscelin invited Louis the Younger to succeed to the rule of the western kingdom. Since his wife Luitgard also advocated heeding this call, Louis invaded West Francia. He marched as far as Verdun, but after the new kings Louis III and Carloman ceded their part of Lotharingia to the invader, Louis retreated. In February 880, this gain was confirmed by the Treaty of Ribemont, signed near Saint Quentin. This treaty determined the border of the two kingdoms that were to remain unchanged until the fourteenth century. 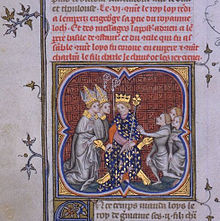 A fourteenth-century depiction of the three sons of Louis the German — Carloman, Louis the Younger, and Charles — swearing an oath to him. Louis the German is here depicted as a French king, wearing the fleur-de-lis.
In the Grandes Chroniques de France

Relationship with the nobility

In contrast to his father, Louis the Younger preferred reconciling royal interests with those of the nobility and avoided confrontation. He managed to bind powerful families to the king, including the Luidovingian relatives of his wife, that later themselves became kings and emperors. Louis mostly stayed in the Rhineland, avoiding Saxony or his eastern borders. Louis did visit Bavaria on two occasions, but mostly left it to the government of his illegitimate nephew, Carloman's son, Arnulf, Duke of Carinthia.[3]

Since the summer of 879, Vikings had been increasing their attacks on the Frankish kingdom and occasionally penetrated deeply into the interior of the land. Louis's kingdom was the most hard-hit after that of West Francia. In February 880, Louis confronted and defeated a Norse host at the Battle of Thimeon (near modern Charleroi). His son Hugh, however, was killed in this battle. Louis also drove the Norse out of the royal palace of Nijmegen, which they had occupied. In the same month, a Saxon host commanded by Duke Bruno, the king's brother-in-law, suffered a heavy defeat near Hamburg and Bruno and many other Saxon nobles fell. However, as the example of the victory at Thimeon illustrates, no single military victory could stop the tide of Viking incursions.

Louis fell sick in 881 and died in Frankfurt on 20 January 882. He was buried beside his father in the abbey of Lorsch. By his wife Luitgard of Saxony, he had had a son called Louis (877–879), who died in a fall from a palace window, and a daughter called Hildegard (878–895). Louis had also fathered an illegitimate son, Hugh (855/60 – February 880), either with the daughter of Adalard or with an earlier concubine. Since he left no heir, all his territories fell to his brother Charles, who thus could reunite the entire East Frankish kingdom. Hildegard later joined with the Bavarian magnate Engeldeo in conspiring against King Arnulf and was deprived of her "public honours" in 895, according to the Annals of Fulda.

His illegitimate children were: