Louise Élisabeth d'Orléans was one of the seven daughters of Philippe II, Duke of Orléans, and his wife, Françoise Marie de Bourbon. Her mother was a legitimised daughter of Louis XIV of France and his mistress, Madame de Montespan. She was known as Élisabeth. As a member of the reigning House of Bourbon, Élisabeth was a princesse du sang.

She was born at the Palace of Versailles, and was her parents' fourth surviving daughter (the first, Mademoiselle de Valois died a year after birth). Prior to her marriage, she was known as Mademoiselle de Montpensier. She grew up among one brother and five sisters. Because no one was much interested in her as a child, Louise Élisabeth received a poor education[citation needed] and seemed destined for marriage to some obscure German or Italian prince. Like her younger sister, Louise, she had a convent education. She was very close to her brother, Louis, Duke of Chartres at birth, who, upon the death of their father in 1723, would inherit the title of Duke of Orléans.

Since 1715, her father was de facto ruler of France as the Regent for the child, King Louis XV. In 1718, the War of the Quadruple Alliance broke out between France and Spain. In 1720, King Philip V of Spain wanted to make peace and proposed a double marriage: his three-year-old daughter, Infanta Mariana Victoria, would marry the eleven-year-old Louis XV, and his son and heir, Louis, would marry one of the Regent's daughters.

By that time, Élisabeth and her sister Philippine Élisabeth were the Regent's only unmarried daughters. It was later decided that they would marry two Infantes of Spain. Therefore, in 1721, at the age of eleven, Élisabeth was married by proxy in November, in Paris,[1] Louise Élisabeth and her younger sister left for Madrid. Despite a cold reception from the Spanish royal family, especially by Elisabeth Farnese, the stepmother of her future husband, she married Louis of Spain on 20 January 1722 at Lerma. Her dowry was of 4 million Livres.[2]

Her sister Philippine Élisabeth was later engaged to Infante Charles of Spain, another heir to the throne of Spain; but the marriage came to nothing and her sister was later sent back to France where she died at the age of nineteen in Paris.

As wife of the heir to the Spanish throne, Élisabeth assumed the title of Princess of Asturias. 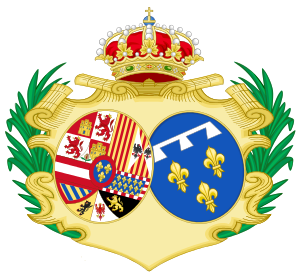 Louise Élisabeth bore the arms of the House of Orléans from which she descended (R) and the arms of her husband the King (L).

On 15 January 1724, the emotionally unstable Philip V abdicated in favour of his eldest son, who became King Louis. Élisabeth became Queen of Spain, but after only seven months of reign, Louis died of smallpox. Because he died without an heir, his father ascended the throne once again. Élisabeth stayed in Madrid for some time after the death of her husband but the Spanish court was malicious towards the lonely teenage widow.

After the death of her husband, she returned to France at the request of her mother, the Dowager Duchess of Orléans. She was obliged to live peacefully in Paris, away from the Court of her young cousin Louis XV. As the widow of the King of Spain, she was to receive an annual pension of 600,000 Livres from the state; however, Spain would not pay because her marriage had been annulled.[1] When she moved back to France, Louise Élisabeth was formally known as queen dowager of Spain. This led to a dispute with her sister, the Duchess of Modena and Reggio. The Duchess's coach had to let that of the younger Louise Élisabeth pass first, a queen having a higher rank than a duchess.[3]