Louise Diane d'Orléans (27 June 1716 – 26 September 1736) was the sixth daughter and last child of Philippe d'Orléans, Duke of Orléans (Regent of the Kingdom from 1715 to 1723) and his wife, Françoise Marie de Bourbon, the youngest legitimised daughter of King Louis XIV of France and his mistress, Madame de Montespan. She was born during the Regency of Philippe d'Orléans, the Regent of Louis XV of France. The Princess of Conti by marriage, she died in childbirth at the age of twenty. Some sources refer to her as Louis Diane.

Louise Diane d'Orléans was born in the Palais-Royal, the Paris residence of the House of Orléans, on 27 June 1716 as the youngest child of the Duke and Duchess of Orléans. On the subject of her granddaughter's birth, Elizabeth Charlotte of the Palatinate (known at court simply as Madame) said:

At the moment when I concluded my letter to the Princess of Wales, they came to announce to me that Madame d'Orléans was in labour. It was just eleven o'clock when my carriage was ready [at the Château de Saint-Cloud ], and at a quarter to one I entered the ante-chamber, and was told in a low voice : 'Her Royal Highness was safely brought to bed an hour ago.' But this was said in so sad a tone that I did not doubt that Madame d'Orléans had brought into the world a seventh daughter, and that unfortunately is what has happened. 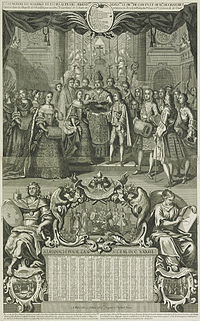 Engraving of The Marriage of the Prince of Conti and Mademoiselle de Chartres at Versailles, 1732

Louise grew up in an era when her father, known as Philippe d'Orléans or simply le Régent was the de facto ruler of France, him being in charge of the affairs of state since the death of Louise's maternal grand father Louis XIV. The Palais-Royal was where the Régent held his court and lived openly with his mistress Marie Thérèse de Parabère. Her mother would later acquire the Château de Bagnolet where she would live quietly without scandal.

As a member of the reigning House of Bourbon, she was a princesse du sang. As her mother, by then the Duchess of Orléans, was illegitimate by birth, Louise, like her siblings, was not a petite-fille de France.

In her youth, she was said to have been a very sensitive child and would grow up to be one of the more beautiful of the Regent's daughters. Despite her being another girl, (1 of 7 overall), her birth was no really greeted with the joy that had met her brother, Louis d'Orléans, Duke of Orléans. Upon the death of her father in 1723, at Versailles, at the age of forty-nine, her only brother inherited the title of Duke of Orléans and, in 1724, he married Margravine Johanna of Baden-Baden (1704–1726).

In December 1731, it was decided that she should marry her distant cousin Louis François de Bourbon, Prince of Conti. Her marriage was arranged by her mother Françoise Marie, Dowager Duchess of Orléans and her first cousin (and subsequent mother in law) Louise Élisabeth, Dowager Princess of Conti.

After being baptised on 19 January 1732 by the Cardinal of Rohan (then the Grand Almoner of France), she married the Prince of Conti three days later, on 22 January. The marriage ceremony took place at the Palace of Versailles. Louise was then fifteen years old. At her wedding, her Condé cousin Élisabeth Alexandrine de Bourbon had the honour of holding her train.

After the marriage, she became known at court as Her Serene Highness, the Princess of Conti. Her husband had succeeded to the Conti title in 1727 upon the death of his father, Louis Armand II, Prince of Conti. In 1734, Louise gave birth to a son, heir to the Conti name, and, in 1736, to a second child who died at birth.

Louise died in childbirth on 26 September 1736 at Issy, outside Paris. She was buried at the Saint-André-des-Arcs church. At her death, due to the Queen Marie Leszczyńska being otherwise engaged, the queen sent Louise's cousin Marie Anne de Bourbon (Mademoiselle de Clermont) to represent her at Issy.

Her only surviving son, Louis François Joseph, was the last Prince of Conti.