Louise Renée de Penancoët de Kérouaille, Duchess of Portsmouth (6 September 1649 – 14 November 1734) was a mistress of Charles II of England. Through her son by Charles II, Charles Lennox, 1st Duke of Richmond, she is ancestress of both wives of Prince Charles: Diana, Princess of Wales, and Camilla, Duchess of Cornwall. 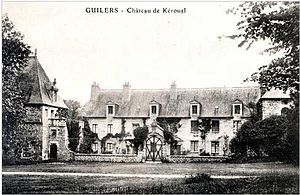 Manor of Keroual, near Brest, property of Louise; she was born there in 1649

The Kérouaille family were nobles in Brittany, and their name was so spelt by themselves. The form "Quérouaille" was commonly used in England. All are derivations of the original Breton name Kerouazle, which is the most common form in Brittany.

Louise was early introduced to the household of Henrietta Anne Stuart, Duchess of Orléans, sister of Charles II of England, and sister-in-law of Louis XIV of France. Louis de Rouvroy, duc de Saint-Simon, asserts that her family threw her in the way of Louis XIV in the hope that she would become a royal mistress. In 1670, she accompanied Henrietta on a visit to Charles II at Dover. The sudden death of Henrietta left her unprovided for, but Charles II appointed her a lady-in-waiting to his own queen, Catherine of Braganza. Unlike her predecessor Barbara Palmer, who had openly insulted the Queen, Louise was careful to show her every respect, and relations between the two women were never less than amicable.[6] 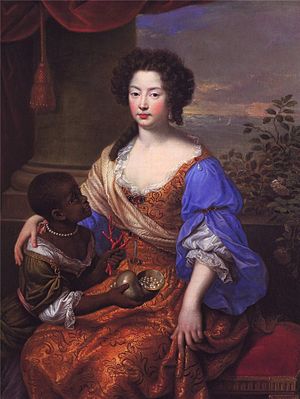 It was later said that Louise had been selected by the French court to fascinate Charles II, but for this there seems to be no evidence. Yet when there appeared a prospect that Charles would show her favour, the intrigue was vigorously pushed by the French ambassador, Colbert de Croissy, aided by the secretary of state, Henry Bennet, 1st Earl of Arlington, and his wife.[1]

Louise, who concealed great cleverness and a strong will under an appearance of languor and a rather childlike beauty (John Evelyn, the diarist, speaks of her "baby face"), yielded only when she had already established a strong hold on Charles affections and character. Her son Charles (1672–1723) was created Duke of Richmond in 1675.[7]

The support Louise received from the French envoy was given on the understanding that she should serve the interests of her native sovereign. The bargain was confirmed by gifts and honours from Louis XIV and was loyally carried out by Louise.[8] However, she was much disliked by the people in England.[9] Louis gave her a pair of earrings worth the astonishing sum of eighteen thousand pounds, his most expensive gift to England that year, and certainly more lavish than anything he had ever given Charles queen.[10]

However, the hatred openly avowed for her in England was due as much to her own activity in the interest of France as to her notorious promiscuity. Nell Gwynne, another of Charles' mistresses, called her "Squintabella", and when mistaken for her, replied, "Pray good people be civil, I am the Protestant whore."[11]

The titles of Baroness Petersfield, Countess of Fareham and Duchess of Portsmouth[12] were granted to her for life on 19 August 1673. Her pensions and money allowances of various kinds were enormous. In 1681 alone she received £136,000.[13] The French court gave her frequent presents, and in December 1673 conferred upon her the fief Duchess of Aubigny in the Peerage of France at the request of Charles II. 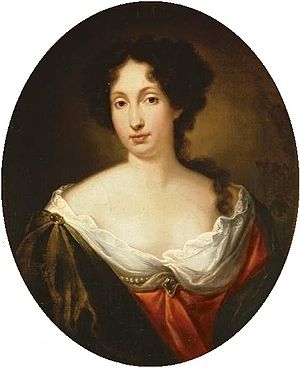 A 1683 painting of Louise de Kérouaille by Simon Du Bois

At about this time Louise was instrumental in bringing to Charles II's attention a young Frenchman who proposed a solution to the longitude problem. While the Frenchman's proposal was ineffective, it led Charles to establish the Royal Observatory, Greenwich, and appoint John Flamsteed as Astronomer Royal.[14]

Louise's thorough understanding of Charles' character enabled her to retain her hold on him to the end. She contrived to escape uninjured during the crisis of the "Popish Plot" in 1678: she found an unexpected ally in Queen Catherine, who was grateful for the kindness and consideration which Louise had always shown her. She was strong enough to maintain her position during a long illness in 1677, and a visit to France in 1682. One of Charles nicknames for her was 'Fubbs', meaning plump or chubby.[15] This female form was much in vogue at the time, and in 1682 a new royal yacht, HMY Fubbs, was built, referring to Louise's nickname.[15] In February 1685 she assisted in measures to see that Charles II was received into the Catholic Church on his deathbed. That Charles was truly attached to her is shown by his dying instruction to his brother to "do well by Portsmouth", making her one of three women in his life, along with the Queen and Nell Gwynne, who were in his thoughts at the end.

Soon after the death of Charles II, Louise quickly fell from favour. She retired to France, where, except for one short visit to England during the reign of James II and her attendance at the Coronation of George I, she remained. Her attendance at George I's coronation was remarked upon by the Countess of Dorchester when they met the Countess of Orkney ("we three whores"). Between them they'd been the maitresse en titre for over 20 years. Her pensions and a grant on the Irish revenue given her by Charles II were lost either in the reign of James II or at the Revolution of 1688.[16]

During her last years she lived at Aubigny, and was harassed by debt. The French king, Louis XIV, and after his death the regent Philippe II, Duke of Orléans, gave her a pension, and protected her against her creditors. Louise died in Paris on 14 November 1734, aged 85.

Some of Louise's descendants, Diana, Princess of Wales, Camilla, Duchess of Cornwall, and Sarah, Duchess of York, would eventually play major roles in the lives of later princes of the United Kingdom, Charles, Prince of Wales and Andrew, Duke of York.[17]