Louisiana in the American Civil War

Antebellum Louisiana was a slave state, where enslaved Africans and African Americans had comprised the majority of the population during the eighteenth century French and Spanish colonial period. By the time the United States acquired the territory (1803) and Louisiana became a state (1812), the institution of slavery was entrenched. By 1860, 47% of the population was enslaved. The state also had one of the largest free black populations in the United States.[1] Much of the white population, particularly in the cities, supported States' rights and slavery, while pockets of support for the Federal government existed in the more rural areas.

Louisiana seceded from the Union on January 26, 1861. New Orleans, Louisiana, the largest city in the entire South, was strategically important as a port city due to its southernmost location on the Mississippi River and its access to the Gulf of Mexico. The United States War Department early on planned for its capture. The city was taken by Union forces on April 25, 1862. Because a large part of the population had Union sympathies (or compatible commercial interests), the U.S. government took the unusual step of designating the areas of Louisiana then under Federal control as a state within the Union, with its own elected representatives to the U.S. Congress. For the latter part of the war, both the Union and the Confederacy recognized their own distinct Louisiana governors.[2]:1–9

Politics and strategy in Louisiana

On January 8, 1861, Louisiana Governor Thomas Overton Moore ordered the Louisiana militia to occupy the Federal arsenal at Baton Rouge and the Federal forts guarding New Orleans, Fort Jackson and Fort St. Philip. A wealthy planter and slave holder, Moore acted aggressively to engineer the secession of Louisiana from the Union by a convention on January 23. Only five percent of the public were represented in the convention, and the state's military actions were ordered before secession had been established—in defiance of the state constitution, which called for a popular referendum to establish a convention. These actions were justified by Moore's statement: "I do not think it comports with the honor and self-respect of Louisiana as a slave-holding state to live under the government of a Black Republican president." The strategies advanced to defend Louisiana and the other Gulf states of the Confederacy were first, the idea of King Cotton; that an unofficial embargo of cotton to Europe would force Britain to use its navy to intervene in protecting the new Confederacy. The second was a privateer fleet established by the issue of letters of marque and reprisal by President Jefferson Davis, which would sweep the sea clear of U.S. naval and commercial ships, and at the same time sustain Louisiana's booming port economy. The third was a reliance on the ring of pre-war masonry forts of the Third System of American coastal defense, combined with a fleet of revolutionary new ironclads, to safeguard the mouth of the Mississippi from the U.S. Navy. All of these strategies were failures.[5]

In March 1861, George Williamson, the Louisianan state commissioner, addressed the Texan secession convention, where he called upon the slave states of the U.S. to declare secession from the Union in order to continue slavery:

With the social balance wheel of slavery to regulate its machinery, we may fondly indulge the hope that our Southern government will be perpetual... Louisiana looks to the formation of a Southern confederacy to preserve the blessings of African slavery...

The Union's response to Moore's leveraged secession was embodied in U.S. President Abraham Lincoln's realization that the Mississippi River was the "backbone of the Rebellion." If control of the river were accomplished, the largest city in the Confederacy would be taken back for the Union, and the Confederacy would be split in half. Lincoln moved rapidly to back Admiral David Dixon Porter's idea of a naval advance up the river to both capture New Orleans and maintain Lincoln's political support; by supplying cotton to northern textile manufacturers and renewing trade and exports from the port of New Orleans. The U.S. Navy would become both a formidable invasion force and a means of transporting Union forces, along the Mississippi River and its tributaries. This strategic vision would prove victorious in Louisiana.[7][8]:10–78

A number of notable leaders were associated with Louisiana during the Civil War, including some of the Confederate army's senior ranking generals, as well as several men who led brigades and divisions. Antebellum Louisiana residents P.G.T. Beauregard, Braxton Bragg, and Richard Taylor all commanded significant independent armies during the war. Taylor's forces were among the last active Confederate armies in the field when the war closed.[9]

Henry Watkins Allen led a brigade during the middle of the war before becoming the Confederate Governor of Louisiana from 1864–65. Randall L. Gibson, another competent brigade commander, was a postbellum U.S. Senator. Other brigadiers of note included Alfred Mouton (killed at the Battle of Mansfield), Harry T. Hays, Chatham Roberdeau Wheat (commander of the celebrated "Louisiana Tigers" of the Army of Northern Virginia), and Francis T. Nicholls (commander of the "Pelican Brigade" until he lost his left foot at Chancellorsville). St. John Lidell was a prominent brigade commander in the Army of Tennessee.[10]:166 [11]

Henry Gray, a wealthy plantation owner from Bienville Parish, was a brigadier general under Richard Taylor before being elected to the Second Confederate Congress late in the war. Leroy A. Stafford was among a handful of Louisiana generals to be killed during the war. Albert Gallatin Blanchard was a rarity—a Confederate general born in Massachusetts.

Governor Thomas Overton Moore, came held office from 1860 through early 1864. When war erupted, he unsuccessfully lobbied the Confederate government in Richmond for a strong defense of New Orleans. Two days before the city surrendered in April 1862, Moore and the legislature abandoned Baton Rouge as the state capital, relocating to Opelousas in May. Thomas Moore organized military resistance at the state level, ordered the burning of cotton, cessation of trade with the Union forces, and heavily recruited troops for the state militia.[12] 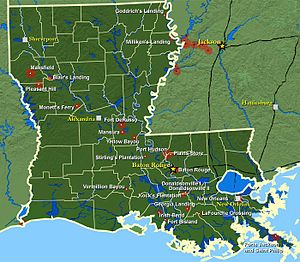 Battles in Louisiana during the American Civil War.

Battles in Louisiana tended to be concentrated along the major waterways, like the Red River Campaign.