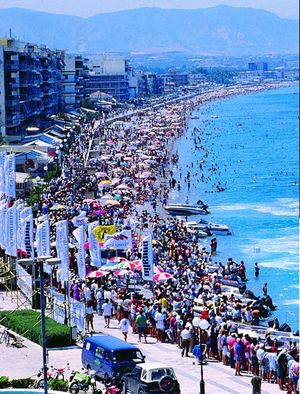 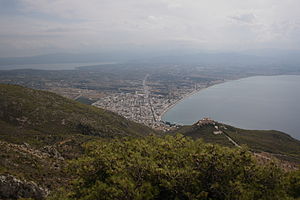 Loutraki: view from the monastery of St Patapius 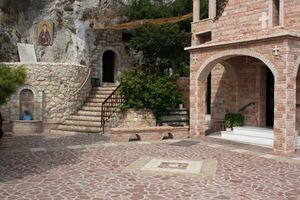 Inside the monastery of St Patapius 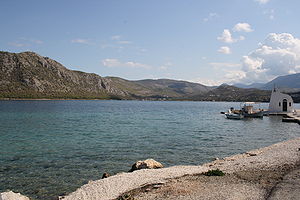 Loutraki (Greek: Λουτράκι) is a seaside resort on the Gulf of Corinth, in Corinthia, Greece. It is located 81 kilometres (50 miles) west of Athens and 8 kilometres (5 miles) northeast of Corinth. Loutraki is the seat of the municipality Loutraki-Perachora-Agioi Theodoroi. The town is well known for its vast natural springs and its therapeutic spas.

In antiquity a town called Thermae (Greek: Θερμαί, hot springs) existed in site. In 1847, an announcement in Italy asserting the therapeutic benefits of bathing in the natural thermal spas found in Loutraki caused an influx of settlers in the surrounding areas, thereby creating modern Loutraki. In 1928 Loutraki was completely destroyed by earthquake and rebuilt. A large park was created by reclaiming sea area using the rubble of the fallen houses. Another strong earthquake hit the area in 1981 with less destructive effects.

The name Loutraki is a direct reference to the thermal spas of the region. It derives from the Loutro(n) (Greek: Λουτρό(ν)) that means bath, bath-house, spa or thermae. The Greek word loutro is directly translated as thermae in English, which was also the ancient name of the region.

The town is bordered by the Gulf of Corinth in the west, while the mountain range of Geraneia dominates north and east. There is a small valley in the southwest that leads to the Isthmus of Corinth. Although part of Corinthia Prefecture, Loutraki is situated northwest of the Corinth Canal thus not on the Peloponese.

A monastery named Osios Patapios is located about 10 km (6 mi) NW of Loutraki on Geraneia mountain, offering great view of the Isthmos area and the Gulf of Corinth.

Loutraki is well known for its Casino (Club Hotel Casino Loutraki), one of the biggest in Europe.

The Heraion of Perachora (sanctuary of the goddess Hera) is an archaeological site of great significance located at the end of the Perachora peninsula and for the picturesque Vouliagmeni lake.

Visitors and tourists deserve to visit remarkable buildings of Loutraki.