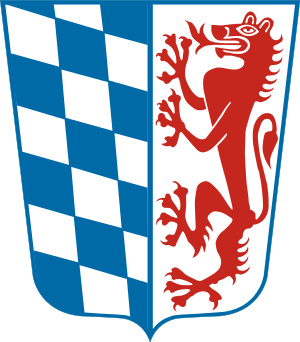 Coat of arms of Lower Bavaria

Lower Bavaria (German: Niederbayern) is one of the seven administrative regions of Bavaria, Germany, located in the east of the state.

Lower Bavaria is subdivided into two regions (Planungsverband) - Landshut and Donau-Wald. Recent election results mark it as the most conservative part of Germany, generally giving huge margins to the CSU. This part of Bavaria includes the Bavarian Forest, a well-known tourist destination in Germany, and the Lower Bavarian Upland. 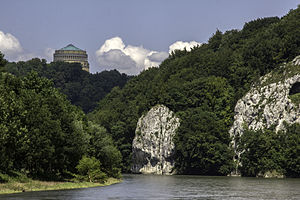 Next to the former ducal residences Landshut and Straubing and the baroque episcopal city of Passau, the city of Kelheim with the Befreiungshalle and Weltenburg Abbey belong to the major tourist attractions. To the scenic attractions belong the River Danube and the Bavarian Forest with Mount Großer Arber.

The duchy of Lower Bavaria was created for the first time with the First Bavarian partition in 1255 under duke Henry but there was no exact identity with the current territory. After the reunification in 1340 Bavaria was divided again in 1349, in 1353 Bavaria-Straubing and Bavaria-Landshut were created in Lower Bavaria. In 1505 Bavaria was irrevocably reunited.

After the founding of the Kingdom of Bavaria the state was totally reorganised and, in 1808, divided into 15 administrative government regions (German: Regierungsbezirke (singular Regierungsbezirk)), in Bavaria called Kreise (singular: Kreis). They were created in the fashion of the French departements, quite even in size and population, and named after their main rivers.

In the following years, due to territorial changes (e. g. loss of Tyrol, addition of the Palatinate), the number of Kreise was reduced to 8. One of these was the Unterdonaukreis (Lower Danube District). In 1837 king Ludwig I of Bavaria renamed the Kreise after historical territorial names and tribes of the area. This also involved some border changes or territorial swaps. Thus the name Unterdonaukreis changed to Lower Bavaria. The district capital was moved from Passau to Landshut.

In 1971 Lower Bavaria again was reshaped when the districts covered were reshaped, too.