From Infogalactic: the planetary knowledge core
Jump to: navigation, search
For other uses, see Lower West Side.

In the late 19th century, Pilsen was inhabited by Czech immigrants who named the district after Plzeň, the fourth largest city in what is now the Czech Republic. They replaced the Germans and Irish who had settled there before them, in the mid-nineteenth century. The population also included smaller numbers of other ethnic groups from the Austro-Hungarian Empire, such as Slovaks, Slovenes, Croats and Austrians, as well as immigrants of Polish and Lithuanian heritage. Many of the immigrants worked in the stockyards and surrounding factories. Like many early 20th century American urban neighborhoods, however, Pilsen was home to both wealthy professionals and the working class, with the whole area knitted together based on the ethnicities, mostly of Slavic descent, who were not readily welcome in other areas of the city.[citation needed]

Although there was some increase in the Hispanic presence in the late 1950s, it was not until the early 1960s that there was a great spurt in the numbers of Latinos in Pilsen.[citation needed] This was due to the displacement of Latinos from the neighborhood UIC currently occupies,[3] south of Hull House,[4] and from other urban revitalization projects.[3] In 1970, Latinos became the majority population in Pilsen, with about 25,000 people out of the community's 43,341 people surpassing the population of people of Eastern European descent. In particular Mexicans made up about 36% of the residents of Pilsen in 1973.[5]

As of 2005 many of the newer residents of the neighborhood were not Latino, and it is projected that the neighborhood will continue to become more diversified in the years ahead.[6] The non-Latino population in Pilsen is still a minority as of the 2010 Census.

The Chicago Housing Authority's plan for transformation of the ABLA projects has spilled over into Pilsen proper, with the now nearly complete Chantico Loft development, Union Row Townhomes, as well as the defunct Centro 18 on 18th Street in East Pilsen. Infill construction of condominiums and single family homes is now in full force on the east side of the neighborhood, as Pilsen becomes one of the next major development areas for infill construction.[citation needed] Some local advocacy groups, including one led by Michael A. Martone, have formed urging the neighborhood's alderman to curtail gentrification to preserve the Mexican-American culture.

In 2006, Pilsen Historic District became a National Historic Register District. South Water Market has been added to the National Register of Historic Places.

The east side of the neighborhood along Halsted Street is one of Chicago's largest art districts, and the neighborhood is also home to the National Museum of Mexican Art. St. Adalbert's dominates the skyline with the opulence typical of churches in the Polish Cathedral style.[citation needed]

The National Museum of Mexican Art is located in the Pilsen neighborhood.

Robb Walsh of the Houston Press wrote that the Mexican restaurants in Pilsen are "unconsciously authentic" to original Mexican cuisine. According to Rick Bayless, the chef and owner of Frontera Grill, this is because Mexican-Americans in Chicago do not encounter a substantial Chicano community that tells them how to cook food in the United States, so the immigrants use the same frame of reference that they had in Mexico.[9] 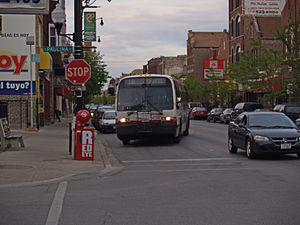 The community area is connected to the rest of the city by both Chicago Transit Authority and Metra transportation services.

Metra's BNSF Railway Line[12] stops on the east at Halsted and 16th Street, and on the west at Western and 18th Street.

There are also bikeways on Blue Island Avenue, 18th, and Halsted Streets.[13]

Residents are zoned to Chicago Public Schools. Benito Juarez Community Academy, located in the Lower West Side, serves much of it. Other parts are zoned to Thomas Kelly High School.[14]

Lower West Side is home to the following educational institutions:

Jungman opened in 1903. In 1914 an addition was installed. The building was converted into a junior high school in 1933 due to a decision by the Chicago Board of Education. It later became a branch of Harrison Tech, and then in 1947 a branch of Walsh Elementary.[15]

Froebel served as a branch for Harrison Tech due to overcrowding on the main campus; it was originally an elementary school.[15]