From Infogalactic: the planetary knowledge core
(Redirected from Lower deck)
Jump to: navigation, search
For other uses, see Deck. 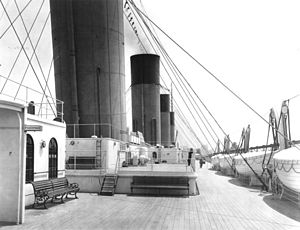 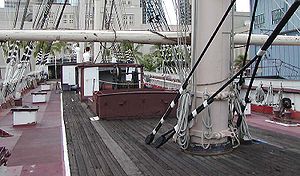 The upper deck of the Falls of Clyde is iron; a centre strip is planked with wood as a sort of walkway. As is typical for a late-19th-century vessel, several deckhouses may be seen.

A deck is a permanent covering over a compartment or a hull[1] of a ship. On a boat or ship, the primary or upper deck is the horizontal structure which forms the 'roof' for the hull, which both strengthens the hull and serves as the primary working surface. Vessels often have more than one level both within the hull and in the superstructure above the primary deck which are similar to the floors of a multi-storey building, and which are also referred to as decks, as are specific compartments and decks built over specific areas of the superstructure. Decks for some purposes have specific names.

The purpose of the upper or primary deck is structural, and only secondarily to provide weather-tightness, and to support people and equipment. The deck serves as the lid to the complex box girder which is the hull. It resists tension, compression, and racking forces. The deck's scantling is usually the same as the topsides, or might be heavier if the deck is expected to carry heavier loads (for example a container ship). The deck will be reinforced around deck fittings such as the capstan, cleats, or bollards.

File:QM2-wraparound-deck.jpg
Crew and passengers on the wraparound deck of RMS Queen Mary 2, an ocean liner.

On ships with more than one level, deck refers to the level itself. The actual floor surface is called the sole, the term deck refers to a structural member tying the ships frames or ribs together over the keel. In modern ships, the interior decks are usually numbered from the primary deck, which is #1, downward and upward. So the first deck below the primary deck will be #2, and the first above the primary deck will be #A2 or #S2 (for "Above" or "Superstructure"). Some merchant ships may alternatively designate decks below the primary deck, usually machinery spaces, by numbers, and those above it, in the accommodation block, by letters. Ships may also call decks by common names, or (especially on cruise ships) may invent fanciful and romantic names for a specific deck or area of that specific ship, such as the Lido deck of the Princess Cruises' Love Boat.

Equipment mounted on deck, such as the ship's wheel, binnacle, fife rails, and so forth, may be collectively referred to as deck furniture. Weather decks in western designs evolved from having structures fore (forward or front) and aft (rear) of the ship mostly clear, then in the 19th century pilothouses/wheelhouses and deckhouses began to appear, eventually developing into the superstructure of modern ships. Eastern designs developed earlier, with efficient middle decks and minimalist fore and aft cabin structures across a range of designs. 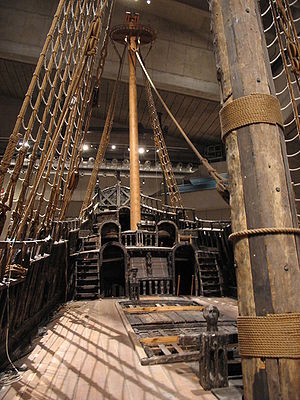 In vessels having more than one deck there are various naming conventions, numerically, alphabetically, etc. However, there are also various common historical names and types of decks:

A traditional wood deck would consist of planks laid fore and aft over beams and along carlins, the seams of which are caulked and paid with tar. A yacht or other fancy boat might then have the deck canvased, with the fabric laid down in a thick layer of paint or sealant, and additional coats painted over. The wash or apron boards form the joint between the deck planking and that of the topsides, and are caulked similarly.

Modern "constructed decks" are used primarily on fiberglass, composite, and cold-molded hulls. The under structure of beams and carlins is the same as above. The decking itself is usually multiple layers of marine-grade plywood, covered over with layers of fibreglass in a plastic resin such as epoxy or polyester overlapped onto the topsides of the hull.

Generally speaking, the method outlined for "constructed decks" is most similar to metal decks. The deck plating is laid over metal beams and carlins and tacked temporarily in place. The difficulty in metal construction is avoiding distortion of the plate while welding due to the high heat involved in the process. Welds are usually double pass, meaning each seam is welded twice, a time consuming process which may take longer than building the wood deck. But welds result in a waterproof deck which is strong and easily repairable. The deck structure is welded to the hull, making it structurally a single unit.

Because a metal deck, painted to reduce corrosion, can be quite slippery, pick up heat from the sun, and be quite loud to work on, a layer of wood decking or thick non-skid paint is often applied to its surface.

The process for building a deck in fiberglass is the same as for building a hull: a female mould is built, a layer of gel coat is sprayed in, then layers of fiberglass in resin are built up to the required deck thickness (if the deck has a core, the outer skin layers of fiberglass and resin are laid, then the core material, and finally the inner skin layers.) The deck is removed from the mould and usually mechanically fastened to the hull.

Fiberglass decks are quite slick with their mirror-smooth surfaces, so a non-skid texture is often moulded into their surface, or non-skid pads glued down in working areas.

Rules of thumb to determine the deck scantlings

The thickness of the decking affects how strong the hull is, and is directly related to how thick the skin of the hull itself is, which is of course related to how large the vessel is, the kind of work it is expected to do, and the kind of weather it may reasonably be expected to endure. While a naval engineer or architect may have precise methods of determining what the scantlings should be, traditional builders used previous experiences and simpler rules-of-thumb to determine how thick the deck should be built.

The numbers derived by these formulae gives a rough number for determining the average thickness of materials based on some crude hull measurements. Below the waterline the thickness should be approximately 115% of the result, while upper topsides and decks might be reduced to 85% of the result.