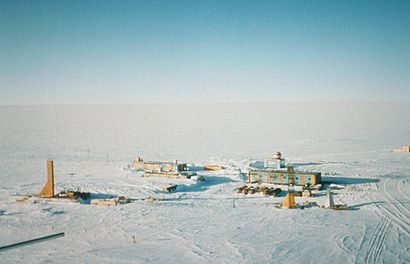 The value may not be listed as the record coldest temperature as it was measured by remote sensing satellites and not by ground-based thermometers, unlike the 1983 record.[4] The temperature announced reflects that of the ice surface, while the Vostok readings measured the air above the ice, and so the two are not directly comparable; however, it is clear that the real temperature at the site is lower than that recorded at Vostok in 1983.[3]

In 1904 Dutch scientist Heike Kamerlingh Onnes created a special lab in Leiden with the aim of producing liquid helium. In 1908 he managed to lower the temperature to less than four degrees above absolute zero, to less than −269 °C (4 Kelvin). Only in this exceptionally cold state will helium liquify, the boiling point of helium being at −268.94 °C. Kamerlingh Onnes received a Nobel Prize for his achievement.[8]

Onnes' method relied upon depressurising the subject gases, causing them to cool.[citation needed] This follows from the first law of thermodynamics;

where U = internal energy, Q = heat added to the system, W = work done by the system.

Consider a gas in a box of set volume. If the pressure in the box is higher than atmospheric pressure, then upon opening the box our gas will do work on the surrounding atmosphere to expand. As this expansion is adiabatic and the gas has done work

Now as the internal energy has decreased so has the temperature.[citation needed]

As of November 2000, nuclear spin temperatures below 100 pK were reported for an experiment at the Aalto University's Low Temperature Lab. However, this was the temperature of one particular type of motion—a quantum property called nuclear spin—not the overall average thermodynamic temperature for all possible degrees of freedom.[9] At such low temperatures, the concept of "temperature" becomes multifaceted since molecular motion cannot be assumed to average out across degrees of freedom.[citation needed] The corresponding peak emission will be in radio waves, rather than in the familiar infrared, so it is very inefficiently absorbed by neighboring atoms, making it difficult to reach thermal equilibrium.

The current apparatus for achieving low temperatures has two stages. The first utilizes a helium dilution refrigerator to get to temperatures of millikelvins, then the next stage uses adiabatic nuclear demagnetisation to reach picokelvins.[citation needed]