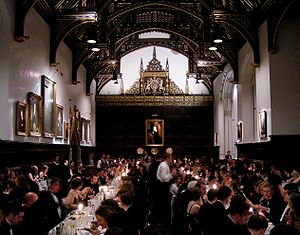 A formal occasion at St John's College, Cambridge, where, beneath the Royal Coat of Arms of the United Kingdom, the Loyal Toast would be given 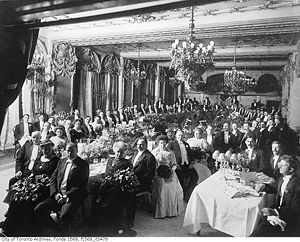 A dinner hosted by John Craig Eaton at the King Edward Hotel in Toronto in 1919; the Loyal Toast would have been given to King George V

A loyal toast is a salute given to the head of state of the country in which a formal gathering is being given, or by expatriates of that country, whether or not the particular head of state is present. It is usually a matter of protocol at state and military occasions, and a display of patriotic sentiment at civilian events. The toast is usually initiated and recited by the host before being repeated by the assembled guests in unison; the composition varying between regions and types of gathering.[1] There is sometimes a tradition of smashing a glass used for a loyal toast, so that no lesser toast can be made with it.[2]

Official etiquette dictates that the Loyal Toast may be given following either the introduction of honoured guests and opening remarks or the completion of all courses of the meal,[9] that it be the first toast given, and that a glass of any beverage other than a cocktail be used.[3] It is also customary not to smoke until the sovereign has been toasted. In carrying out the toast, the event's host will rise and request the audience's attention. Once accomplished and the guests are standing, the host raises his or her glass and recites the toast without any other words or music. The audience then responds to the toast by repeating "The Queen" or, in Canada, "La reine", drinking the toast, and seating themselves once more. In the Royal Navy, however, the toast is given with all attendees seated, a custom practised since King William IV, who had served as a naval officer and experienced the discomfort of standing suddenly on board a vessel at sea, authorized all in the navy to toast him while sitting down. This practice is also carried out on board the ships of the Royal Canadian Navy, so long as neither The Queen nor any other member of the Canadian Royal Family is present, in which case the toast is given while sitting only if the royal guest so requests it.[5] The lawyers of Lincoln's Inn also traditionally take the toast sitting down,[10] commemorating an occasion when King Charles II dined at the inn and the entire company was too drunk to stand up.[11] Members of The Black Watch (Royal Highland Regiment) of Canada recite the toast standing on their chairs with one leg on the table.[11]

In the British Army several units have special privileges and are exempted from the usual practice of standing up for the toast. For example, the Royal Scots Dragoon Guards are allowed to remain seated while the Queen's Royal Hussars do not drink the toast at all.

The Loyal Toast was the catalyst for international friction in 1948, when the Taoiseach (prime minister) of Ireland, then John A. Costello, made an official visit to Canada. There, at a formal function, Governor-General of Canada The Earl Alexander of Tunis steadfastly refused the directions of Irish officials to toast the President of Ireland, Seán T. O'Kelly, instead of the Irish king, George VI; at the time, the King fulfilled the external affairs role that normally belongs to heads of state, while the President of Ireland fulfilled an internal constitutional role. An irked Costello stated to a reporter the following day that he would prompt the Irish parliament to repeal the Executive Authority Act and declare Ireland as a republic,[12] which was done later that year.

In 2000, Captain Aralt Mac Giolla Chainnigh, a professor at the Royal Military College of Canada, petitioned to be personally excused from, amongst other displays of loyalty, having to stand and participate in the Loyal Toast.[13] The Canadian Forces Grievance Board, the Chief of the Defence Staff, and the Federal Court of Canada all upheld the Canadian Forces' requirements that members respect the Canadian head of state and Commander-in-Chief.[14][15]

In Scottish Jacobite circles special very fine glassware engraved with Jacobite symbols was made to toast Charles Edward Stuart, known as Bonnie Prince Charlie, the pretender to the thrones of England, Scotland, France, and Ireland; very little remains due to the tradition of smashing glasses after the toast so that they could not be used for a lesser toast.[2] After the defeat of the Jacobites and the exile overseas of Bonnie Prince Charlie, Jacobite Scots would stand for the loyal toast to "the King" but pass their drink over a glass or jug of water on the table symbolising "the king over the water" instead of the British monarch, as a sign of solidarity with the Jacobite cause and a protest against the Hanoverian succession.[16] Because of this for many years finger bowls were not used on British royal tables, as some people would pass the glass over the bowl. King Edward VII authorized the use of finger bowls during his reign, deeming his dynasty to be sufficiently secure.[17]

At formal occasions in the Spanish Armed Forces, the first toast is to the King of Spain. The highest-ranked officer toasts "Por el primer soldado de España" ("For Spain's first soldier") and the concurrence answers "Por el Rey" ("For the King").

At the Nobel Banquet or other such formal events in Sweden, the first toast is usually to the Swedish sovereign. It is proclaimed by the host or, if the host is the monarch himself, the second-highest-ranking official. It is simply "Hans Majestät Konungens skål" ("The toast of His Majesty the King"). All guests then rise, raise their glasses, and, if the sovereign is present, turn towards him and answer "Konungen" ("The King"). In wardrooms and officer's messes during formal dinners, the Royal Hymn can be sung after the Loyal Toast, even when the king is not present.

The toast to "The President of the United States" is typically offered at US military social functions, such as the United States Marine Corps birthday ball or divisional banquets.[citation needed]