Loyola High School of Los Angeles is a Jesuit preparatory school for young men. It is the oldest high school and continuously run educational institution in Southern California. Loyola is located in the Pico-Union neighborhood, 2 miles (3 km) west of downtown Los Angeles, and just north of Interstate 10 (the Santa Monica Freeway). It admits students from 220 ZIP codes in the greater Los Angeles area.

Loyola High School of Los Angeles is the region's oldest educational institution, pre-dating the University of California system and the Los Angeles public schools. The school was founded in 1865 as St. Vincent's College at the behest of Archdiocese of Los Angeles Bishop Thaddeus Amat, a member of the Vincentian order. In 1919, the Vincentians agreed to transfer management of the school to the Jesuits. After several transitions, the school moved in 1927 to its current location on Venice Boulevard. Irish philanthropist Thomas P. Higgins provided the land for the school.

The college was renamed Loyola College the following year, in honor of St. Ignatius of Loyola, the founder of the Society of Jesus. Until 1929, the campus housed the college, the law school, and the high school. At that time, the Jesuits purchased additional property to house the college and separate facilities were acquired for Loyola Law School just west of downtown Los Angeles. The college, now Loyola Marymount University, was moved to the area now known as Westchester in West Los Angeles. Recent campus development of the school occurred in the 1980s; the gym, track, and swimming pool, along with additional classroom space were built after the administration secured major donations. Donations by the William Hannon Foundation, the Ardolf Family, and others have provided for a new science building, counseling and student centers, additional classrooms, and central plaza, which are operational as of June 2007.

The primary admissions entry point for Loyola High School is in 9th grade, with varying transfer opportunities offered in 10th and 11th grades. Transfer is not allowed going into the senior year, except for rare situations. Admissions decisions are made by a committee headed by director Heath Utley. Admission is based on standardized test scores; recommendations from the candidate's teachers, principal, and minister; involvement in extracurricular activities; a personal statement; and grades. Loyola prides itself on its educational quality as well as its mission to create men for and with others, a hallmark of Jesuit thought. Loyola aims to educate each student as a "whole person." Thus, faculty and staff strive to facilitate student learning in all areas of school life: academic, co-curricular, social, and religious.

Loyola draws its students from all over the greater Los Angeles area, from Pacific Palisades to East L.A., and from Pasadena to San Pedro, and the South Bay as well as the San Fernando, San Gabriel, Santa Clarita and Hidden Valleys. Nearly 50% of the student body is composed of individuals of African-American, Latino, and Asian heritages, which serves to enhance the ethnic and socio-economic diversity of the school.

Loyola's curricular requirements cover a breadth of academic topics. All teachers hold professional degrees.[5] Four years each of social studies and English studies courses are required, along with three years of foreign language study and of science, as well as one year of fine art. Six semesters of theology are also a central part of the curriculum, covering Holy Scripture, systematic theology, Catholic social thought, moral theology, and one senior elective. Advanced Placement courses are offered in 25 subject areas with a historical "pass" rate of almost 80%,[6] and students are encouraged to take a wide variety of electives outside of the required courses. Loyola also offers more than 19 Honors courses to its students.[7] Over 99% of Loyola graduates go on to higher education, with 96% attending 4-year universities. 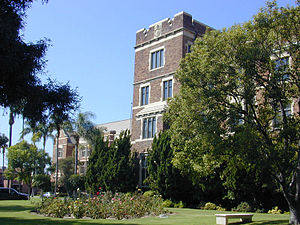 Since the 1970s Loyola students have performed over one million hours of service to the community. As part of its commitment to educating men for and with others, Loyola students participate in four major service-oriented projects during their high school careers. The freshman serve as tutors on the Loyola campus for the award winning High School Placement Test Prep Projects for 8th (October - January) and 7th graders (February - April), as well as assist with the Special Olympics. The second and third service projects include minimum 25-hour service projects during each of the sophomore and junior years. The Senior Service Project is a minimum 85-hour immersion commitment to a non-profit service organization in January of senior year. Inner city grade schools, special education schools, hospitals, hospices, shelters, and soup kitchens are preferred sites for this service experience. Now in its 29th year, the Senior Service Project was featured in "Making A Difference" as part of the NBC National News hosted by Brian Williams on March 11, 2010. The film clip is accessible on the Loyola and NBC websites. Loyola students' community service has been regularly featured on the local news programs of the ABC affiliate, Channel 7, including Kool Kids and a fundraising car wash conducted on behalf of Homeboy Industries in Los Angeles, the gang member reformation program founded by Fr. Gregory Boyle, SJ, a Loyola graduate and former faculty member.

Loyola sponsors one of the leading Community Service fairs in metro Los Angeles during the third week of September each year with over 100 local agencies, center, schools, and organizations sending representatives to enroll Loyola students as volunteers. This event supports all of the school's service and justice education programs and seeks to support better-informed choices for service by the students.

Several times over the course of the year, the Cubs Urban Plunge in Los Angeles is offered to students and faculty as a way for them to better experience the community from the position of the poor, disenfranchised, and marginalized. This is one of Loyola's distinguishing programs. Still the only high school in Los Angeles, public or private, to offer such a program, through this three to four day program, students serve in a number of shelters and centers on Skid row, Hollywood and East Los Angeles. This program continued through the summer of 2010 with four urban plunges being offered. An overview of the Cubs Urban Plunge program may be found in the July edition of the "Beverly Press."

Starting in June 2007, Loyola began an out-of-area hands-on service program with a two-week service immersion in New Orleans. The 2008 program took Loyola students to Appalachia, focused in Wheeling and Charleston, West Virginia. In July 2008 Loyola launched its foreign service immersion in Puebla and Cholula, Mexico. In June 2009, Loyola launched a five week, academic exchange and service immersion with Colegio Del Salvador, the Jesuit high school in Buenos Aires, Argentina. The 2009 summer service immersion program included student, faculty, and staff service teams in New Orleans/Slidell, Louisiana, in mid June and another student, staff, alumni, and parent service team to Lima and Cusco, Peru, in late July and early August. The 2010 service immersion program included one that is agriculturally based in the Salinas Valley in Northern California and an extended urban immersion in Los Angeles, both conducted in mid-June. In 2010 Loyola again conducted a six-week Argentina Intercambio program based in Buenos Aires, expanded to include nine days in metropolitan Montevideo, Uruguay. The Intercambio is conducted in conjunction with the Jesuit colegios in Buenos Aires, Argentina, and in Santa Fe, Montevideo, Uruguay. An overview of the summer service immersion program may be found in the July 31, 2010, edition of the The Tidings, the weekly newspaper of the Archdiocese of Los Angeles.

Overall, each Loyola student completes a minimum of 150 hours of direct service by graduation with many of them matriculating with between 250 – 300 hours. Non-credit service activities include the annual Community Service Fair conducted each September, the Community Service Leadership Team, the annual AIDS Walk Los Angeles, the Peace and Justice Coalition, the annual School of the America's Watch and Ignatian Teach In conducted just before Thanksgiving, Catholic Lobby Day in Sacramento, California, an annual social justice speakers series, and ongoing collection of food, clothing, books, and toys for distribution to the needy served by some of the school's 1,000 placement partners. Service and justice are two significant factors considered in making the most of the "Big Seven" awards for graduating seniors each June. Outstanding service leadership is recognized at the annual student awards ceremony and the Annual Community Service Awards Banquet held each May.

Loyola is an active member of the Ignatian Solidarity Network (ISN), an association of 70 US Jesuit high schools, colleges, and universities engaged in social advocacy and justice education for students and adults. National and regional topical workshops included Loyola's hosting 500 students and adults from the US and Mexico for the 2008 ISN conference on comprehensive immigration reform. In years past, Loyola delegations have participated in national conferences on racism and poverty in New Orleans (2007) and comprehensive immigration advocacy in Washington, DC (2009). The 2010 ISN program occurred in Washington, DC, and focused on immigration, the environment, health care, and education.

Loyola parent, alumni, faculty, and staff involvement in various service projects with students is a distinguishing characteristic of the Loyola program. Parents and alumni are heavily involved in staffing the Saturday tutoring programs for 8th graders and 7th graders each Fall and Spring. In December 2008 and again in October 2009, the whole Loyola faculty, staff, and administration spent the better part of a retreat day serving in the same agencies and schools as their students.

Loyola High School has a strong history of athletics success, including national championships in football and volleyball. Loyola has won at least one CIF Title for the last ten years. In the 2002-2003 academic year, Loyola set the California state record for most section championships (5) won in a single school year: cross-country, basketball, volleyball, track, and golf.