Lozère (French pronunciation: ​[lɔzɛʁ]; Occitan: Losera) is a department in the region of Languedoc-Roussillon-Midi-Pyrénées in southern France near the Massif Central. It is named after Mont Lozère.

Les Sources and Hautes-Cèvennes were two other names proposed for this department but they were not accepted.[3]

The kinds of cheese that are most esteemed at Rome, where the various good things of all nations are to be judged of by comparison, are those that come from the provinces of Nemausus, and more especially the area[N 1] there of Lesura and Gabalis (Lozère and Gévaudan); but its excellence is only very short-lived, and it must be eaten while it is fresh.[4]

During the period 1764-67, the Beast of Gévaudan was a creature that terrorized the general area of the former province of Gévaudan, with nearly identical borders to today's Lozère, in the Margeride Mountains.

The geography of Lozère is complicated, covering four mountain ranges. In the north-west, the basalt plateau of Aubrac rises between 1,000 and 1,450 m (3,280 and 4,760 ft), with a cold humid climate influenced by the Atlantic. The north and north-east of the department contains the Margeride mountains, which are formed of granite, and have peaks between 1,000 and 1,550 m (3,280 and 5,090 ft). The climate here is also cold, but dryer than in Aubrac, with less snow.

The Causses are a series of very dry limestone plateaus in the south-west, and the south-east contains the Cévennes, which include the highest point in the department, the granite Mont Lozère at 1,702 m (5,584 ft).

The department also contains numerous rivers, above and below ground, including the Tarn, whose source is on Mont Lozère, and which flows through the Gorges du Tarn in the Causses.

View over the cirque of Pougnadoire and Saint-Chély-du-Tarn village, in the Tarn Gorges

The département is managed by the General Council of Lozère in Mende. As of 2015[update], the President of the Council is Sophie Pantel. Lozère is part of the region of Languedoc-Roussillon-Midi-Pyrénées.

There are 2 arrondissements, 13 cantons and 185 communes in Lozère.[5]

The following is a list of the 13 cantons of the Lozère department (with their INSEE codes), following the French canton reorganisation which came into effect in March 2015:[7]

The main activities are cattle farming and tourism. There is barely any agricultural farming in Lozère due to poor soil quality. The hardy Aubrac is the most commonly farmed cattle breed here.

The region has one of the lowest rates of unemployment in France, which may be attributed to the enforced long-standing tradition whereby young people emigrate to cities such as Lyon, Marseille, Montpellier when they reach working age. 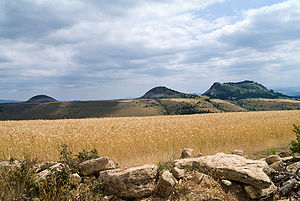 Lozère is a rural department, with relatively little land taken up by roads and buildings. Overall the land use is divided as follows:

The inhabitants of Lozère are known, in French, as Lozériens (women: Lozériennes).[8]

Tourist activities include caving and a variety of sports, such as skiing and kayaking. Lozère contains a part of the Cévennes National Park. Lozère is considered one of the best areas in France for trout fishing. Rivers such as the Lot, Tarn and Truyère are particularly noted for their trout populations.