Luca Filippi (born 9 August 1985 in Savigliano, Italy) is an Italian racing driver who competes in the IndyCar Series.

Filippi made the step out of karting in 2003, competing in Formula Renault 2.0 Italia, where he finished third in 2004 behind Pastor Maldonado and Kohei Hirate.

Filippi stepped up to the Italian Formula 3000 series in 2005, driving for Giancarlo Fisichella's Fisichella Motorsport team. He also made his Formula One test debut in 2005 with Minardi in the team's last ever test.

Fisichella joined forces with the Coloni Motorsport GP2 Series team in 2006, and Filippi was selected as a driver for the team. However, he switched to the BCN Competición team mid-way through the season.

In 2007, he continued in GP2 with Super Nova Racing and emerged as one of the series' top performers, finishing the season in fourth position.

For the inaugural GP2 Asia Series season in early 2008, Filippi raced for Team Meritus, a Malaysian team who entered the series due to regular series team Racing Engineering not competing in the winter series. He only managed to score four points in ten races, finishing in 17th place.

Filippi driving for ART Grand Prix at the Silverstone round of the 2008 GP2 Series season.

Filippi driving for Arden International at the Valencia round of the 2008 GP2 Series season. 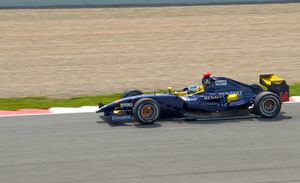 Filippi driving for Super Nova at the Catalunya round of the 2009 GP2 Series season.

Filippi drove for the ART Grand Prix team in the first half of the 2008 GP2 Series season, alongside Romain Grosjean.[2] Following a disappointing first half of the season, Luca left the team in favour of Sakon Yamamoto after ten races.[3] Filippi was confirmed as a driver at the Arden International team two days later, where he replaced Yelmer Buurman.[4] His results failed to improve and he finished nineteenth in the championship.

Filippi returned to BCN Competición for the 2008–09 GP2 Asia Series season, but was replaced by Fabrizio Crestani as a result of the team's purchase after the first round of the season.[5]

For the 2009 GP2 Series season, he returned to the Super Nova team, and took the final win of the season at the Autódromo Internacional do Algarve. His result promoted him up to fifth overall in the championship standings.

Filippi returned to Team Meritus for the 2009–10 GP2 Asia Series season, and finished as runner-up in the championship standings, taking Meritus' first victory in the series in Bahrain.

Filippi began the 2010 GP2 Series season without a drive, but returned to Super Nova mid-season to replace the injured Josef Král. He took five points from ten races, before Král returned for the season finale, finishing twentieth in the championship. During this period, Filippi became the most experienced GP2 driver in the series' history, beating Javier Villa's record of 82 race entries.

Filippi was drafted into the Scuderia Coloni team for the second round of the 2011 GP2 Asia Series season after regular driver James Jakes opted to move to the United States in order to pursue a career in the IndyCar Series. He returned once again to Super Nova for the main series, alongside Fairuz Fauzy. After five rounds of the championship, he switched back to Coloni, replacing Kevin Ceccon.[6] He immediately registered an improvement in form, winning his first race for the team at the Nürburgring, which also marked his 100th race in the series.[7] He also won the Spa-Francorchamps sprint race and the Monza feature race, propelling him to a career-best second place in the drivers' championship.

After almost a year away from GP2, Filippi was again called up by Coloni as a replacement for Stefano Coletti for his home race of the 2012 championship at Monza.[8] Despite his absence from the series, he won the feature race. He also secured pole position for the following (and final) round of the championship in Singapore, but crashed heavily during the feature race, damaging his car beyond immediate repair and thus non-starting the sprint race. Nevertheless, he still finished 16th in the drivers' championship despite contesting only four of the series' 24 races.

Filippi contested in the 2010 Auto GP season, where he finished 5th in the drivers' standings with 2 victories topping and tailing the season with the 1st race at Brno and the last race at Monza. He returned to the series the following year, taking one pole position, three fastest laps, one win and five further podiums, finishing as runner-up to Kevin Ceccon by only 3 points despite having missed two races.

On 6 March 2012, it was announced that Filippi would join Rahal Letterman Lanigan Racing in the IndyCar series from the Indy 500 onwards. He would have partnered ex-Formula 1 driver Takuma Sato;[9] despite this, he didn't take part in the Indy 500 nor in the following races. He competed in four races in 2013 for Bryan Herta Autosport, scoring a best finish of 15th.

CFH Racing signed Filippi for the 2015 IndyCar season to compete at the road/street races.[10]