Lucas Tucci di Grassi (born 11 August 1984) is a Brazilian professional racing driver who currently competes for Audi Sport Team Joest in the FIA World Endurance Championship. Di Grassi also races in the FIA Formula E Championship for Audi Sport ABT and became the first driver in motorsport history to win a motor race in an all electric single-seater racing car at the 2014 Beijing ePrix. He is also a former GP2 Series runner-up, as well as driving for Virgin Racing in the 2010 Formula One season.

Born in São Paulo, di Grassi's career in karting peaked in 2000, with a 5th place in the Formula A World Championship. Di Grassi began his formula racing career in Brazilian Formula Renault in 2002, finishing as runner-up.

In 2003 Di Grassi stepped up to Formula Three, driving a Dallara F301 Mugen-Honda for Avallone Motorsport in Formula Three Sudamericana. He finished as the championship runner-up behind Danilo Dirani, with one win and eleven other podium finishes. This came despite missing the last six races after suffering a major crash at the Curitiba round.[1]

He also travelled to Europe to make four race starts in the F3 Euroseries with Prema Powerteam, achieving a best finish of fourth place.[2] The following year, he made a permanent move to Europe and took a drive with Hitech Racing in the British F3 Championship. His season peaked with two wins, and he was classified in eighth place overall.[3] Another of that year's highlights was a podium finish on his début at the Macau Grand Prix with Hitech.

In 2005, Di Grassi took another step up in a full-time return to the F3 Euroseries with Manor Motorsport. Against the dominant ASM pairing of Lewis Hamilton and Adrian Sutil he could only manage one win but ended the year third in the championship.[1]

At the end of the season, Di Grassi returned to Macau, this time with Manor, and won the event from third on the grid,[4] although runaway F3 Euroseries champion Hamilton missed the race.[1] 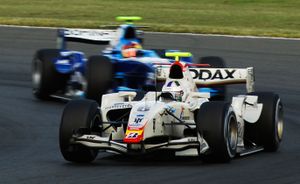 2006 brought Di Grassi to the next stage in his career: promotion to the GP2 Grand Prix support series with Team Durango. It was a modest debut season, however, with only 8 points and 17th place in the championship standings.[5]

For 2007 he joined reigning champions ART Grand Prix. He scored points consistently throughout the season, failing to score only once in the first 13 races. Despite not winning a race in that time, it put him in contention for the championship along with iSport's Timo Glock.[1]

Di Grassi worked on testing the new-model GP2 car (to be used between 2008 and 2010), while testing for Renault F1. However, he resumed his GP2 career in 2008 by securing a drive at Campos Racing from round 4 onwards, replacing Ben Hanley.[8] With three-second places and one fourth-place finish, he was the highest-scoring driver over the first two race meetings in which he took part. Two wins followed and he briefly looked set for a surprising championship challenge, before a final lap collision with Giorgio Pantano (who was disqualified for the incident) at Spa effectively ended his hopes. He finished an eventual third, ten points behind Pantano despite six fewer races.

He returned to the series for 2009 with Racing Engineering,[9] and again finished third, finishing with the same number of points as he did in 2008.

Having previously been a test driver for Renault in 2005, di Grassi tested for the Honda Racing F1 Team at the end of 2008, alongside fellow Brazilian and GP2 rival Bruno Senna.

Di Grassi was then sent a contract by Renault to join them as a test driver, becoming the third GP2 runner-up to join Renault as a test driver after fellow Brazilian Nelson Piquet, Jr. and Heikki Kovalainen. However, di Grassi was not retained by the team for 2010.

Di Grassi took his and the Virgin team's first race finish at the 2010 Malaysian Grand Prix.

In Japan, he crashed on the way to the grid before the race had started.[11] In December, di Grassi won the Desafio Internacional das Estrelas, a karting event organised by Felipe Massa.

On 21 December 2010, di Grassi was left without a drive, after Virgin announced Jérôme d'Ambrosio to partner Glock for the 2011 season.[12]

On 6 July 2011, di Grassi was appointed Pirelli's official tester for their development of Formula One tyres for the 2011 season,[13] and will drive the Italian company's Toyota TF109 test car in five test sessions in order to develop the next generation of tyres, as well as attending several race weekends where he will collect information about tyre performance and attend technical briefings.[13] He will remain with Pirelli for the 2012 Formula One season alongside Jaime Alguersuari to help develop tyres for 2013 and beyond using a Renault R30 chassis and it will be upgraded to the 2012 requirements for Alguersuari and Di Grassi to run the car across four development tests during the course of the season at Jerez, Spa, Monza and Barcelona to help Pirelli improve its selection of tyres.

In 2012, di Grassi was announced as the official test driver for the upcoming environmentally friendly Formula E series run by the FIA.[14] He first tested the prototype Formula E car at Circuit de L'Eure near Paris in August.[15] Di Grassi later terminated his contract as test driver to race in the series.[16]

On 13 February 2014, di Grassi was announced to be competing in the upcoming Formula E season with Audi Sport ABT alongside his campaign in the World Endurance Championship. Di Grassi will be team mates with GP2 driver Daniel Abt. 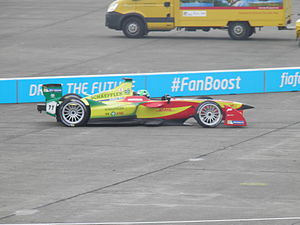 In September 2014, di Grassi won the first race of the season in Beijing. This made Di Grassi the first driver in history to win an all electric motor race in history. He recorded five other podium finishes in Putrajaya, Punta del Este, Long Beach, Monaco and Moscow aHaving lead the majority of the championship Di Grassi had to settle for 3rd place overall having fought for the title in the final round alongside Buemi and Piquet.Di Grassi losses the title by eleven points but managed the most podium finishes of any driver with six. Di Grassi was disqualified from the 2015 Berlin ePrix having won the race with illegal modifications on his ABT car.

For the second consecutive year Di Grassi achieved three podium finishes in the opening three races. Di Grassi won the Putrajya ePrix as a result of a mechanical failure on Buemi car who had been leading the race.

In September 2012, Di Grassi was confirmed to be driving for Audi for round five in the World Endurance Championship at São Paulo alongside Allan McNish and Tom Kristensen, and replacing Rinaldo Capello who had retired after the 2012 24 Hours of Le Mans. Di Grassi managed to qualify the No. 2 Audi second on the grid, and finished the race third overall. Di Grassi did not race with Audi for the rest of the year, but was announced as an Audi test driver for 2013.

Audi announced in March 2013 that Di Grassi was selected to race for Audi for the opening round of the 2013 American Le Mans Series season at the 12 Hours of Sebring. Di Grassi again teamed up with Kristensen and McNish, and finished second overall after exchanging the lead with the sister Audi.

Shortly after the season-opening 6 Hours of Silverstone, Audi announced that Di Grassi would be racing an experimental car at the 6 Hours of Spa-Francorchamps and the 2013 24 Hours of Le Mans alongside Oliver Jarvis and Marc Gené, and finished third in both events.

On 3 February 2014, Audi announced that di Grassi would replace the retiring Allan McNish in the No. 1 Audi, sharing the ride with Tom Kristensen and Loïc Duval for the full 2014 season.

* Season still in progress.
† As di Grassi was a guest driver, he was ineligible for championship points.

† Driver did not finish the Grand Prix, but was classified as they had completed over 90% of the race distance.

† Not Eligible for points