Lucille Clifton (born Thelma Lucille Sayles, in Depew, New York)[6] grew up in Buffalo, New York, and graduated from Fosdick-Masten Park High School in 1953.[7] She attended Howard University with a scholarship from 1953 to 1955, leaving to study at the State University of New York at Fredonia (near Buffalo).[7]

In 1958, Lucille Sayles married Fred James Clifton, a professor of philosophy at the University of Buffalo, and a sculptor whose carvings depicted African faces. Lucille and her husband had six children together, which included four daughters (Sidney, Fredrica, Gillian, and Alexia) and two sons (Channing and Graham). Lucille worked as a claims clerk in the New York State Division of Employment, Buffalo (1958–60), and as literature assistant in the Office of Education in Washington, D.C. (1960–71). Writer Ishmael Reed introduced Lucille to Clifton while he was organizing the Buffalo Community Drama Workshop. Fred and Lucille Clifton starred in the group's version of The Glass Menagerie, which was called "poetic and sensitive" by the Buffalo Evening News.

In 1966, Reed took some of Clifton's poems to Langston Hughes, who included them in his anthology The Poetry of the Negro. In 1967, the Cliftons moved to Baltimore, Maryland.[7] Her first poetry collection, Good Times, was published in 1969, and listed by The New York Times as one of the year's ten best books. From 1971 to 1974, Clifton was poet-in-residence at Coppin State College in Baltimore. From 1979 to 1985, she was Poet Laureate of the state of Maryland.[8] From 1982 to 1983, she was visiting writer at the Columbia University School of the Arts and at George Washington University. In 1984, her husband died of cancer.[7]

From 1985 to 1989, Clifton was a professor of literature and creative writing at the University of California, Santa Cruz.[9] She was Distinguished Professor of Humanities at St. Mary's College of Maryland. From 1995 to 1999, she was a visiting professor at Columbia University. In 2006, she was a fellow at Dartmouth College. 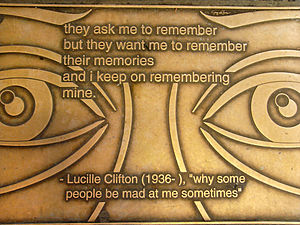 Lucille Clifton traced her family's roots to the West African Kingdom of Dahomey, now the Republic of Benin. Growing up she was told by her mother, "Be proud, you're from Dahomey women!"[10] She cites as one of her ancestors the first black woman to be "legally hanged" for manslaughter in the state of Kentucky during the time of Slavery in the United States. Girls in her family are born with an extra finger on each hand, a genetic trait known as polydactyly. Lucille's two extra fingers were amputated surgically when she was a small child, a common practice at that time for reasons of superstition and social stigma. Her "two ghost fingers" and their activities became a theme in her poetry and other writings. Health problems in her later years included painful gout which gave her some difficulty in walking.

Her series of children's books about a young black boy began with 1970's Some of the Days of Everett Anderson. Everett Anderson, a recurring character in many of her books, spoke in authentic African-American dialect and dealt with real life social problems. Her work features in anthologies such as My Black Me: A Beginning Book of Black Poetry (ed. Arnold Adoff), A Poem of Her Own: Voices of American Women Yesterday and Today (ed. Catherine Clinton), Black Stars: African American Women Writers (ed. Brenda Scott Wilkinson) and Bedrock: Writers on the Wonders of Geology (ed. Lauret E. Savoy, Eldridge M. Moores, and Judith E. Moores (Trinity University Press). Studies about her life and writings include Wild Blessings: The Poetry of Lucille Clifton (LSU Press, 2004) by Hilary Holladay, and Lucille Clifton: Her Life and Letters (Praeger, 2006) by Mary Jane Lupton.

Two-Headed Woman: "homage to my hips"

In 1980, Lucille Clifton published “homage to my hips” in her book of poems, Two-Headed Woman. Two-Headed Woman won the 1980 Juniper Prize and was characterized by its "dramatic tautness, simple language … tributes to blackness, [and] celebrations of women", which are all traits reflected in the poem "homage to my hips".[11] This particular collection of poetry also marks the beginning of Clifton’s interest in depicting the “transgressive black body.”[12] "Homage to my hips" was preceded by the poem "homage to my hair" – and acts as a complementary work that explores the relationship between African-American women and men and aimed to reinvent the negative stereotypes associated with the black female body. "Homage to my hips" and "homage to my hair" both relate the African-American body to mythological powers – a literary technique common among many literary works by African American women. Jane Campbell poses the idea that "the specific effect of mythmaking upon race relations … constitutes a radical act, inviting the audience to subvert the racist mythology that thwarts and defeats Afro-Americans, and to replace it with a new mythology rooted in the black perspective."[13] Therefore, Clifton utilizes "homage to my hips" to celebrate the African-American female body as a source of power, sexuality, pride, and freedom.

Lucille Clifton received a Creative Writing Fellowships from the National Endowment for the Arts in 1970 and 1973, and a grant from the Academy of American Poets. She received the Charity Randall prize, the Jerome J. Shestack Prize from the American Poetry Review, and an Emmy Award. Her children's book Everett Anderson's Good-bye won the 1984 Coretta Scott King Award. In 1988, Clifton became the first author to have two books of poetry named finalists for one year's Pulitzer Prize. (The award dates from 1918, the announcement of finalists from 1980.)[14] She won the 1991/1992 Shelley Memorial Award, the 1996 Lannan Literary Award for Poetry, and for Blessing the Boats: New and Collected Poems 1988–2000 the 2000 National Book Award for Poetry.[15] From 1999 to 2005, she served on the Board of Chancellors of the Academy of American Poets. In 2007, she won the Ruth Lilly Poetry Prize; the $100,000 prize honors a living U.S. poet whose "lifetime accomplishments warrant extraordinary recognition." Clifton is set to receive the Robert Frost Medal for lifetime achievement posthumously, from the Poetry Society of America.[16]