Lucille Ricksen was born Ingeborg Myrtle Elisabeth Ericksen in Chicago on August 22, 1910. Her parents were Danish immigrants named Samuel and Ingeborg Nielsen Ericksen. Although Lucille Ricksen's birth year has been widely reported as being 1909, her birth certificate states 1910 as her true birth year. She had an older brother, Marshall, who was born in 1907 in Chicago, who also appeared in early silent films.

Ricksen began her career as a professional child model and actress similar to other actresses her age such as Madge Evans, Helen Chandler and Kittens Reichert, starting at age 4.[1] Through these roles, Ricksen rose to fame and provided a revenue for her parents.[1] In 1920, she arrived with her mother, Ingeborg, in Hollywood at the request of Samuel Goldwyn who immediately cast the eleven-year-old in a comedy serial entitled The Adventures of Edgar Pomeroy. The serial shorts ran in approximately twelve installments and were based on the stories of Booth Tarkington, with actor Edward Peil, Jr. taking the leading role of Edgar.

After leaving the Edgar Pomeroy serials, Ricksen was next cast in the 1922 Stuart Paton directed comedy The Married Flapper opposite Marie Prevost and Kenneth Harlan and the thirteen-year-old's career opportunities began to improve dramatically. In 1922, Ricksen was signed to a contract with actor and director Marshall Neilan, who cast her in the commercially and critically successful Neilan directed drama The Stranger's Banquet opposite Claire Windsor and Hobart Bosworth.

Ricksen spent the early 1920s appearing in a number of high-profile acting roles. One notable performance was her role as Ginger in the 1923 John Griffith Wray directed drama Human Wreckage, which was a drug prevention film produced by and starring actress Dorothy Davenport. It was made in reaction to the death of Davenport's husband, actor Wallace Reid, as a result of a morphine addiction.[2] 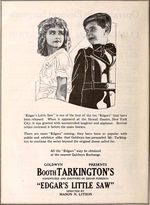 Ricksen, pictured at age 10 upon a promotional poster for the 1920 short film, Edgar's Little Saw

From 1920 to 1925, Ricksen starred opposite some of the most popular actors of the silent era, including Conrad Nagel, James Kirkwood, Sr., Jack Pickford, Louise Fazenda, Laura La Plante, Anna Q. Nilsson, Blanche Sweet, Bessie Love, Cullen Landis and Patsy Ruth Miller. Ricksen often portrayed characters who were much older than herself and she garnered critical acclaim from the public and within the motion picture industry for her maturity at handling adult themes. In 1924, at the age of fourteen, she was named one of the WAMPAS Baby Stars; a promotional campaign sponsored by the Western Association of Motion Picture Advertisers in the United States, which honored thirteen young women each year who they believed to be on the threshold of movie stardom. Other actresses named that year included Dorothy Mackaill and Clara Bow.[3] 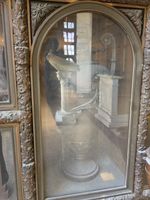 While filming the Del Andrews directed comedy The Galloping Fish in 1924 opposite Sydney Chaplin and Louise Fazenda, Ricksen became ill. She had appeared in prominent roles in ten films that year, including the popular drama The Painted Lady opposite George O'Brien and Dorothy Mackaill. However, by early 1925, her condition worsened and she was diagnosed as having tuberculosis.[4] During her illness, her father disappeared.[1] Ricksen's last screen appearance was opposite Claire Windsor and William Haines in the drama The Denial, filmed in 1924 and released in early 1925.[5]

Ricksen was bedridden for the last few months of her life, and her mother Ingeborg became distraught and kept a bedside vigil over her daughter. In late February 1925, Ingeborg succumbed to a fatal heart attack and collapsed on top of her bedridden daughter.[6] Afterwards, Ricksen spent her days being taken care of by others in the movie colony, including actress Lois Wilson.[1] She died two weeks after her mother's death, on March 13, 1925 at the age of fourteen.[7]

After her death, the media wrote that her illness was created through malnutrition and exhaustion[8] due to her working almost non-stop for twelve years under poor conditions. Her death was used as an example for parents not to exploit their children to the showcase their talent.[1]

A photo article of Ricksen is featured in the 2011 film The Artist. In the film, she is listed as a newcomer in 1929, four years after she had died in real life.

Season 2, episode 2 of Lifetime Movie Networks, "Ghost Inside My Child" featured a young woman who believes she was Lucille Ricksen in her previous life.