From Infogalactic: the planetary knowledge core
Jump to: navigation, search
This article is about the founder of the Roman Republic. For other people with the cognomen "Brutus", see Brutus.

Prior to the establishment of the Roman Republic, Rome had been ruled by kings. Brutus led the revolt that overthrew the last king, Lucius Tarquinius Superbus, after the rape of the noblewoman (and kinswoman of Brutus) Lucretia at the hands of Tarquin's son Sextus Tarquinius. The account is from Livy's Ab urbe condita and deals with a point in the history of Rome prior to reliable historical records (virtually all prior records were destroyed by the Gauls when they sacked Rome under Brennus in 390 BC or 387 BC).

Overthrow of the monarchy

According to Livy, Brutus had a number of grievances against his uncle the king, amongst them was the fact that Tarquin had put to death a number of the chief men of Rome, including Brutus' brother. Brutus avoided the distrust of Tarquin's family by feigning slow-wittedness[1] (in Latin brutus translates to dullard).[2]

He accompanied Tarquin's sons on a trip to the Oracle of Delphi. The sons asked the oracle who would be the next ruler of Rome. The Oracle responded the next person to kiss his mother would become king. Brutus interpreted "mother" to mean the Earth, so he pretended to trip and kissed the ground.[3]

Brutus, along with Spurius Lucretius Tricipitinus, Publius Valerius Publicola, and Lucius Tarquinius Collatinus were summoned by Lucretia to Collatia after she had been raped by Sextus Tarquinius, the son of the king Tarquinius Superbus. Lucretia, believing that the rape dishonored her and her family, committed suicide by stabbing herself with a dagger after telling of what had befallen her. According to legend, Brutus grabbed the dagger from Lucretia's breast after her death and immediately shouted for the overthrow of the Tarquins.[4]

The four men gathered the youth of Collatia, then went to Rome where Brutus, being at that time Tribunus Celerum, summoned the people to the forum and exhorted them to rise up against the king. The people voted for the deposition of the king, and the banishment of the royal family.[5]

Brutus, leaving Lucretius in command of the city, proceeded with armed men to the Roman army then camped at Ardea. The king, who had been with the army, heard of developments at Rome, and left the camp for the city before Brutus' arrival. The army received Brutus as a hero, and the king's sons were expelled from the camp. Tarquinius Superbus, meanwhile, was refused entry at Rome, and fled with his family into exile.[6]

The Oath of Brutus

According to Livy, Brutus' first act after the expulsion of Lucius Tarquinius Superbus was to bring the people to swear an oath never to allow any man again to be king in Rome.[7] 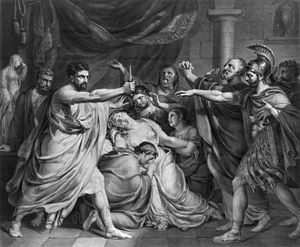 "The oath of Brutus" by François-Joseph Navez

(First of all, by swearing an oath that they would suffer no man to rule Rome, it forced the people, desirous of a new liberty, not to be thereafter swayed by the entreaties or bribes of kings.)

This is, fundamentally, a restatement of the 'private oath' sworn by the conspirators to overthrow the monarchy:[8]

(By this guiltless blood before the kingly injustice I swear – you and the gods as my witnesses – I make myself the one who will prosecute, by what force I am able, Lucius Tarquinius Superbus along with his wicked wife and the whole house of his freeborn children by sword, by fire, by any means hence, so that neither they nor any one else be suffered to rule Rome.)

There is no scholarly agreement that the oath took place; it is reported, although differently, by Plutarch (Poplicola, 2) and Appian (B.C. 2.119). Nevertheless, the spirit of the oath inspired later Romans including his descendant Marcus Junius Brutus.

Brutus and Lucretia's bereaved husband, Lucius Tarquinius Collatinus, were elected as the first consuls of Rome (509 BC). However, Tarquinius was soon replaced by Publius Valerius Publicola. Brutus' first acts during his consulship, according to Livy, included administering an oath to the people of Rome to never again accept a king in Rome (see above) and replenishing the number of senators to 300 from the principal men of the equites. The new consuls also created a new office of rex sacrorum to carry out the religious duties that had previously been performed by the kings.[9]

During his consulship the royal family made an attempt to regain the throne, firstly by their ambassadors seeking to subvert a number of the leading Roman citizens in the Tarquinian conspiracy. Amongst the conspirators were two brothers of Brutus' wife Vitellia, and Brutus' two sons, Titus Junius Brutus and Tiberius Junius Brutus. The conspiracy was discovered and the consuls determined to punish the conspirators with death. Brutus gained respect for his stoicism in watching the execution of his own sons, even though he showed emotion during the punishment.[10]

Tarquin again sought to retake the throne soon after at the Battle of Silva Arsia, leading the forces of Tarquinii and Veii against the Roman army. Valerius led the infantry, and Brutus led the cavalry. Aruns, the king's son, led the Etruscan cavalry. The cavalry first joined battle and Aruns, having spied from afar the lictors, and thereby recognising the presence of a consul, soon saw that Brutus was in command of the cavalry. The two men, who were cousins, charged each other, and speared each other to death. The infantry also soon joined the battle, the result being in doubt for some time. The right wing of each army was victorious, the army of Tarquinii forcing back the Romans, and the Veientes being routed. However the Etruscan forces eventually fled the field, the Romans claiming the victory.[11]

The surviving consul, Valerius, after celebrating a triumph for the victory, held a funeral for Brutus with much magnificence. The Roman noblewomen mourned him for one year, for his vengeance of Lucretia's violation.[12]

Brutus in literature and art 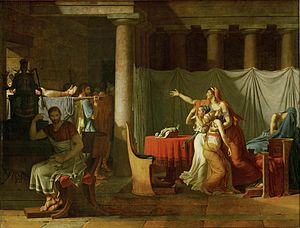 The Lictors Bring to Brutus the Bodies of His Sons by David, 1789

Lucius Junius Brutus is quite prominent in English literature, and he was quite popular among British and American Whigs.

A reference to L. J. Brutus is in the following lines from Shakespeare's play The Tragedie of Julius Cæsar, (Cassius to Marcus Brutus, Act 1, Scene 2).

"O, you and I have heard our fathers say,
There was a Brutus once that would have brookt
Th'eternal devil to keep his state in Rome
As easily as a king."

One of the main charges of the senatorial faction that plotted against Julius Caesar after he had the Roman Senate declare him dictator for life, was that he was attempting to make himself a king, and a co-conspirator Cassius, enticed Brutus' direct descendant, Marcus Junius Brutus, to join the conspiracy by referring to his ancestor.

L. J. Brutus is a leading character in Shakespeare's Rape of Lucrece and in Nathaniel Lee's Restoration tragedy (1680), Lucius Junius Brutus; Father of his Country.

In The Mikado, the protagonist Nanki-poo refers to his father the Emperor as "the Lucius Junius Brutus of his race", for being willing to enforce his own law even if it means killing his son.

The memory of L. J. Brutus also had a profound impact on Italian patriots, including those who established the ill-fated Roman Republic in February 1849.

Brutus was a hero of republicanism during the Enlightenment and Neoclassical periods. In 1789, at the dawn of the French Revolution, master painter Jacques-Louis David publicly exhibited his politically charged masterwork, The Lictors Bring to Brutus the Bodies of His Sons, to great controversy.[13]