Lucy Russell, Countess of Bedford (née Harington) (1580–1627) was a major aristocratic patron of the arts and literature in the Elizabethan and Jacobean eras. Sidney Lee called her "the universal patroness of poets."

She was the daughter of Sir John Harington of Exton, and Anne Kelway; well-educated for a woman in her era, she knew French, Spanish, and Italian. She was a member of the Sidney/Essex circle from birth, through her father, first cousin to Sir Robert Sidney and Mary, Countess of Pembroke; she was a close friend of Essex's sisters Penelope Rich and Dorothy Percy, Countess of Northumberland (the latter named one of her daughters Lucy after the Countess).

Lucy married Edward Russell, 3rd Earl of Bedford, on 12 December 1594, when she was thirteen years old and he was twenty-two. She had a reputation as a beauty, and "for getting her own way." Lucy's husband, the Earl of Bedford, got himself into serious trouble in 1601 when he rode with the Earl of Essex in Essex's rebellion against Queen Elizabeth. The Bedford fortunes revived when the reign of James I and Anne of Denmark began in 1603. 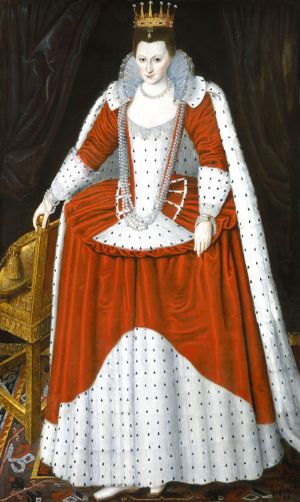 The Countess became a Lady of the Bedchamber and confidant of Queen Anne; she performed in several of the masques staged at Court in the early 17th century, including The Masque of Blackness, Hymenaei, The Masque of Beauty, The Masque of Queens, and The Vision of the Twelve Goddesses. In one instance, she functioned as something similar to a theatrical producer: she instigated and organised the 1617 Court performance of Robert White's masque Cupid's Banishment, which was acted by students from the first English girls' school, the Ladies Hall in Deptford.

Jonson
She was a noted patron of Ben Jonson, who dedicated his play Cynthia's Revels (1600) to her and addressed his Epigrams nos. 76, 84, and 94 to her, extolling her patronage. By his own admission, Jonson portrayed her as Ethra in his lost pastoral, The May Lord — though he may also have depicted her as Lady Haughty, president of the Collegiates in Epicene (1609). When Jonson was imprisoned in 1605 for his role in the Eastward Ho scandal, he wrote a letter to an unknown lady, who is thought by some scholars to have been the Countess of Bedford.[1]

Others
In addition to Jonson, Lucy supported other significant poets of her era, including Michael Drayton, Samuel Daniel, George Chapman, and John Donne. She might be the "Idea" of Drayton's pastoral Idea: The Shepherd's Garland (1593) and of his sonnet sequence Idea's Mirror (1594). Drayton dedicated his Mortimeriados (1594) to her, as Daniel did his Vision of the Twelve Goddesses (1604). Lucy patronised a range of lesser writers of her era, including the translator John Florio, who credited her help in his translation of the essays of Montaigne. She "received more dedications than any other woman associated with the drama" in her era.[2]

She was the godmother of Donne's second daughter, also named Lucy. Donne, indeed, seems to have been deeply involved with her on a psychological level — "Most of the poems of Donne's middle years relate, in one way or another, to this glamorous and intriguing woman."[3] Her contradictions could be provocative: the Countess was a dedicated Calvinist, and supported many Calvinist authors and thinkers – yet she allegedly performed bare-breasted in Court masques. Her relationships with some of her poets, including Donne and Drayton, were sometimes uneven; poets who dedicated their works to her could also complain of the loss of her favour.

She was also receptive to women poets, like Cecily Bulstrode. Lucy occasionally wrote poems herself, only one of which is extant.

While best remembered for her patronage of writers, Lucy also supported musicians, John Dowland being a noteworthy example. She is the dedicatee of Dowland's Second Book of Songs (1600).

A few scholars have identified the Earl and Countess of Bedford as the allegorised couple in Shakespeare's The Phoenix and the Turtle, who left "no posterity" (line 59) — yet since the poem was published in 1601, when the Countess was only twenty years old, the identification has struck others as unlikely.

Apart from literary matters, The Countess was a significant figure in the development of English country-house and garden design, centring on her estates at Twickenham Park and Moor Park. As one of the most influential women at James's court, she was also involved in a range of political issues; in the later part of the reign she was among the most prominent supporters of Elizabeth of Bohemia.

Prominent as she was, both Lucy and her husband had serious financial problems throughout their lives. Lucy reportedly had debts of £50,000 in 1619, apart from the Earl's massive indebtedness.

Lucy, Countess of Bedford died in the same month as her husband, May 1627. None of their children survived infancy.

Lucy Russell is the subject of The Noble Assassin (2011), a historical novel by Christie Dickason.