From Infogalactic: the planetary knowledge core
Jump to: navigation, search
Not to be confused with Ludites.
For the EP by Grotus, see Luddite (EP). 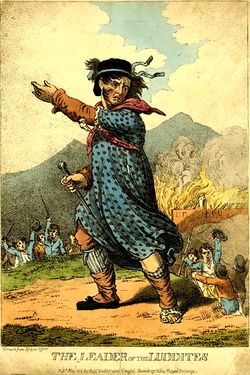 The Leader of the Luddites, engraving of 1812

The Luddites were a group of English textile workers and weavers in the 19th century who destroyed weaving machinery as a form of protest. The group was protesting the use of machinery in a "fraudulent and deceitful manner" to get around standard labour practices.[1] Luddites feared that the time spent learning the skills of their craft would go to waste as machines would replace their role in the industry.[2] It is a misconception that the Luddites protested against the machinery itself in an attempt to halt progress of technology. However, the term has come to mean one opposed to industrialisation, automation, computerisation or new technologies in general.[3] The Luddite movement began in Nottingham and culminated in a region-wide rebellion that lasted from 1811 to 1816. Mill owners took to shooting protesters and eventually the movement was brutally suppressed with military force.

Although the origin of the name Luddite (/ˈlʌd.aɪt/) is uncertain, the movement is said to be named after Ned Ludd, an apprentice who allegedly smashed two stocking frames in 1779 and whose name had become emblematic of machine destroyers. Ned Ludd, however, was completely fictional and used as a way to shock the government.[4][5][6] The name evolved into the imaginary General Ludd or King Ludd, who, like Robin Hood, was reputed to live in Sherwood Forest.[7][lower-alpha 1]

The lower classes of the 18th century, generally speaking, were not openly disloyal to the king or government.[10] Overall, violent action was rare because punishments were harsh. The majority of individuals were primarily concerned with meeting their own daily needs.[11] This movement towards aggression in the 19th century can be seen as part of the rise in English working-class discontent due to the Industrial Revolution. Working conditions in the mills were harsh but efficient enough to threaten the livelihoods of skilled artisans. The new inventions allowed for faster and cheaper labour because machines were operated by less-skilled, low-wage labourers. The Luddites were not afraid of technology and did not attempt to eliminate technology out of fear. Their goal was instead to gain a better bargaining position with their employers.[12] Luddism was in fact a prototypical, insurrectionary labour movement involving a loose coalition of dissenters.[13]

Research by Kevin Binfield and others asserts that since organized action by stockingers had occurred at various times since 1675, the movements of the early 19th century must be viewed in the context of the hardships suffered by the working class during the Napoleonic Wars, rather than as an absolute aversion to machinery.[14][15][16] Irregular rises in food prices provoked the Keelmen working in the port of Tyne to riot in 1710[17] and tin miners to steal from granaries at Falmouth in 1727. There was a rebellion in Northumberland and Durham in 1740, and the assault of Quaker corn dealers in 1756. Skilled artisans in the cloth, building, shipbuilding, printing and cutlery trades organized friendly societies to peacefully insure themselves against unemployment, sickness, and in some cases against intrusion of "foreign" labour into their trades, as was common among guilds.[18][lower-alpha 2]

Malcolm L. Thomis argued in his 1970 history, The Luddites, that without the structure of a union, machine-breaking was one of the only mechanisms workers could use to increase pressure on employers, to undermine lower-paid competing workers and to create solidarity among workers, "These attacks on machines did not imply any necessary hostility to machinery as such; machinery was just a conveniently exposed target against which an attack could be made."[16]

An agricultural variant of Luddism, centering on the breaking of threshing machines, occurred during the widespread Swing Riots of 1830 in southern and eastern England.[19]

Birth of the movement

See also Barthélemy Thimonnier, whose sewing machines were destroyed by tailors who believed that their jobs were threatened

The Luddite movement emerged during the harsh economic climate of the Napoleonic Wars, which saw a rise of difficult working conditions in the new textile factories. Luddites objected primarily to the rising popularity of automated textile equipment, threatening the jobs and livelihoods of skilled workers as this technology allowed them to be replaced by cheaper and less skilled workers.[20] The movement began in Arnold, Nottingham on 11 March 1811 and spread rapidly throughout England over the following two years.[21][22] Handloom weavers burned mills and pieces of factory machinery.

The Luddites met at night on the moors surrounding industrial towns to practice drills and maneuvers. Their main areas of operation began in Nottinghamshire in November 1811, followed by the West Riding of Yorkshire in early 1812 then Lancashire by March 1813. They smashed stocking frames and cropping frames among others. There does not seem to have been any political motivation behind the Luddite riots and there was no national organization. The men were merely attacking what they saw as the reason for the decline in their livelihoods.[23] Luddites battled the British Army at Burton's Mill in Middleton and at Westhoughton Mill, both in Lancashire.[24] The Luddites and their supporters anonymously sent death threats to, and possibly attacked, magistrates and food merchants. Activists smashed Heathcote's lacemaking machine in Loughborough in 1816.[25] He and other industrialists had secret chambers constructed in their buildings that could be used as hiding places during an attack.[26]

In 1817, an unemployed Nottingham stockinger and probably ex-Luddite, named Jeremiah Brandreth led the Pentrich Rising. While this was a general uprising unrelated to machinery, it can be viewed as the last major Luddite act. 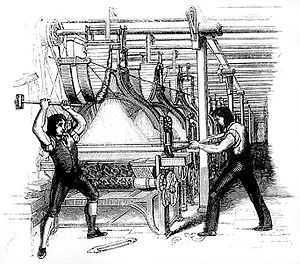 Later interpretation of machine breaking (1812), showing two men superimposed on an 1844 engraving from the Penny magazine which shows a post 1820s Jacquard loom.[lower-alpha 3] Machine-breaking was criminalised by the Parliament of the United Kingdom as early as 1721, the penalty being penal transportation, but as a result of continued opposition to mechanisation the Frame Breaking Act 1812 made the death penalty available: see "criminal damage in English law".

The British Army clashed with the Luddites on several occasions. At one time there were more British soldiers fighting the Luddites than there were fighting Napoleon on the Iberian Peninsula.[27][lower-alpha 4] Three Luddites, led by George Mellor, ambushed and assassinated mill owner William Horsfall of Ottiwells Mill in Marsden, West Yorkshire at Crosland Moor in Huddersfield. Horsfall had remarked that he would "Ride up to his saddle in Luddite blood."[28] Mellor fired the fatal shot to Horsfall's groin, and all three men were arrested.

Lord Byron denounced the plight of the working class, the government’s inane policies and ruthless repression in the House of Lords on 27 February 1812, "I have been in some of the most oppressed provinces of Turkey; but never, under the most despotic of infidel governments, did I behold such squalid wretchedness as I have seen since my return, in the very heart of a Christian country.[29]"

The British government sought to suppress the Luddite movement with a mass trial at York in January 1813, following the attack on Cartwrights mill at Rawfolds near Cleckheaton. The government charged over 60 men, including Mellor and his companions, with various crimes in connection with Luddite activities. While some of those charged were actual Luddites, many had no connection to the movement. Although the proceedings were legitimate jury trials, many were abandoned due to lack of evidence and 30 men were acquitted. These trials were certainly intended to act as show trials to deter other Luddites from continuing their activities. The harsh sentences of those found guilty, which included execution and penal transportation, quickly ended the movement.[30][31]

Parliament subsequently made "machine breaking" (i.e. industrial sabotage) a capital crime with the Frame Breaking Act[32] and the Malicious Damage Act 1861.[33] Lord Byron opposed this legislation, becoming one of the few prominent defenders of the Luddites after the treatment of the defendants at the York trials.[34]

Several decades later, in 1867, Karl Marx referred to the Luddites in Capital, Volume I, noting that it would be some time before workers were able to distinguish between the machines and "the form of society which utilizes these instruments" and their ideas. "The instrument of labour, when it takes the form of a machine, immediately becomes a competitor of the workman himself."[35]

In the 19th century, occupations that arose from the growth of trade and shipping in ports, also in 'domestic' manufacturers, were notorious for precarious employment prospects. Underemployment was chronic during this period,[18] and it was common practice to retain a larger workforce than was typically necessary for insurance against labour shortages in boom times.[18]

Moreover, the organization of manufacture by merchant-capitalists in the textile industry was inherently unstable. While the financiers' capital was still largely invested in raw material, it was easy to increase commitment where trade was good and almost as easy to cut back when times were bad. Merchant-capitalists lacked the incentive of later factory owners, whose capital was invested in building and plants, to maintain a steady rate of production and return on fixed capital. The combination of seasonal variations in wage rates and violent short-term fluctuations springing from harvests and war, periodic outbreaks of violence are more easily understood.[18]

In 1956, a speech in Parliament said that "organized workers were by no means wedded to a Luddite Philosophy."[36] More recently, the term Neo-Luddism has emerged to describe opposition to many forms of technology.[37] According to a manifesto drawn up by the Second Luddite Congress (April 1996; Barnesville, Ohio), Neo-Luddism is "a leaderless movement of passive resistance to consumerism and the increasingly bizarre and frightening technologies of the Computer Age." [38]

The term Luddite fallacy is used by economists in reference to the fear that technological unemployment inevitably generates structural unemployment and is consequently macro-economically injurious. If a technological innovation results in a reduction of necessary labour inputs in a given sector, then the industry-wide cost of production falls, which lowers the competitive price and increases the equilibrium supply point which, theoretically, will require an increase in aggregate labour inputs.[39]