From Infogalactic: the planetary knowledge core
Jump to: navigation, search
"Bridge at Remagen" redirects here. For the film about the battle for the bridge, see The Bridge at Remagen. For the World War II battle itself, see Battle of Remagen.

The Ludendorff Bridge (sometimes referred to as the Bridge at Remagen) was in early March 1945 one of two remaining bridges across the River Rhine in Germany when it was captured during the Battle of Remagen by United States Army forces during the closing weeks of World War II. Built in World War I to help deliver reinforcements and supplies to the German troops on the Western Front, it connected Remagen on the west bank and the village of Erpel on the eastern side between two hills flanking the river.

At the end of Operation Lumberjack (March 1–7, 1945), the troops of the American 1st Army approached Remagen and were surprised to find that the bridge was still standing. Its capture enabled the U.S. Army to establish a bridgehead on the eastern side of the Rhine. After the U.S. forces captured the bridge, Germany tried to destroy it multiple times until it collapsed on March 17, 1945, ten days after it was captured, killing 28 U.S. Army Engineers. While it stood, the bridge enabled the U.S. Army to deploy 25,000 troops, six Army divisions, with many tanks, artillery pieces and trucks, across the Rhine. It was never rebuilt. The towers on the west bank were converted into a museum and the towers on the east bank are a performing art space. 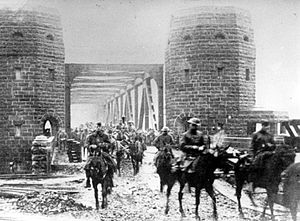 German cavalry troops on the Ludendorff Bridge in 1918

Remagen is located close to and south of the city of Bonn. The town of Remagen had been founded by the Romans about 2,000 years earlier. The town had been destroyed multiple times and rebuilt each time. Under the Schlieffen Plan, a bridge was planned to be built here in 1912, as well as bridges in Engers and Rudesheim.

German General Erich Ludendorff was a key advocate for building this bridge during World War I and it was named after him.[1] It was designed to connect the Right Rhine Railway, the Left Rhine Railway and the Ahr Valley Railway (Ahrtalbahn)[2] and carry troops and supplies to the Western Front. It was designed by Karl Wiener. It was constructed between 1916 and 1919, using Russian prisoners of war as labor, and carried two railway lines and two pedestrian catwalks on either side.[1] Work on the bridge pillars and arches was done by leading construction companies Grün & Bilfinger[3][4] with the steel bridge built by MAN-Werk Gustavsburg.[5]

It was one of three bridges built to improve railroad traffic between Germany and France during World War I; the others were the Hindenburg Bridge at Bingen am Rhein and the Urmitz Bridge on the Neuwied–Koblenz railway near Koblenz.

The 4,640 tonnes (5,110 tons) structure cost about 2.1 million marks when it was built during World War I. Since the bridge was a major military construction project, both abutments of the bridge were flanked at either end by stone towers with fortified foundations that could shelter up to a full battalion of men.[2] The towers were designed with fighting loopholes for troops.[1] From the flat roof of the towers troops had a good view of the valley.[3] To protect the bridge, both an engineering unit and a military police unit were assigned to the site.

The designers had also built cavities into the concrete piers where demolition charges could be placed. Explosives could be installed at the base of the piers in case it came under attack. Electrical circuits, protected by steel tubing, had been included so engineers would be able to detonate the bridge from the safety of the rail tunnel beneath the Erpeler Ley.[1] As a backup, they laid primer cord that could be manually ignited. They believed they could easily destroy the bridge when necessary with minimal preparation.[1]

During the Occupation of the Rhineland after the Great War, the French filled these cavities with concrete. This was one of the four bridges that were guarded by Americans during the U.S. Army's occupation of part of Germany. In 1938, after the Germans reacquired the Rhineland and control of the bridge, zinc-lined boxes were placed at key structural points. They connected the boxes by electrical cable protected by steel pipe to a point inside the rail tunnel under Erpeler Ley where engineers could safely detonate the charges.[1]

During World War II, the Allied bombing campaign destroyed more than half of Erpel's buildings, including all the buildings between Erpel's market place and the bridge, which had been built during the 17th and 18th century.[3] On October 14–15, 1944, an American bomb had struck a chamber containing the demolition charges of the Mulheim Bridge in Cologne, destroying the bridge. German leader Adolf Hitler reacted by demanding that demolition charges on bridges could only be set when the enemy was within a specific distance, and only exploded by written order. He ordered those "responsible" for the destruction of the Mulheim Bridge court-martialed. This left officers responsible for destroying bridges in the event that the enemy approached nervous about the consequences if they failed.[2] Hitler also issued orders that the Westwall be held at all costs which meant that the German forces paid less attention to the bridges across the Rhine.[2]

In March 1945, about 5,000 people lived in the town. The Rhine near Remagen is about 300 metres (980 ft) wide.[1] During Operation Lumberjack, on March 7, 1945, troops of the U.S. Army's 9th Armored Division reached the bridge during the closing weeks of World War II and were surprised to see that the railroad bridge was still standing. It was one of 22 vehicle and 28 railroad bridges across the Rhine, all[dubious – discuss] of which the Germans had systematically destroyed in advance of the Allied's attack. But in this instance the German defenders failed to demolish it and U.S. forces were able to capture the bridge.

The ability to quickly establish a bridgehead on the eastern side of the Rhine and to get forces into Germany allowed the U.S. forces to envelop the German industrial area of the Ruhr. The Allies were able to get six divisions across the damaged bridge before it collapsed on March 17, 1945, ten days after it was captured. The collapse killed 28 and injured 93[6] U.S. Army Engineers. The unexpected availability of the first major crossing of the Rhine, Germany's last major natural barrier and line of defense, caused Allied high commander Dwight D. Eisenhower to alter his plans to end the war. 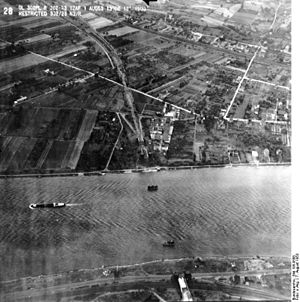 Former location of the Ludendorff Bridge in 1953 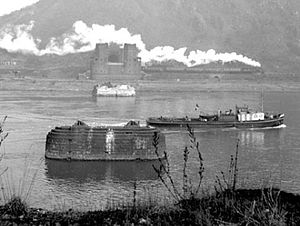 The piers supporting the Ludendorff Bridge were a navigation hazard and were removed during the summer of 1976.

After the war, the railway crossing was not deemed important enough to justify rebuilding the bridge. Parts of the land used for the approaching railway lines are now used as an industrial estate on the western bank and a park on the eastern bank.

Since 1980, the surviving towers on the western bank of the Rhine have housed a museum called "Peace Museum Bridge at Remagen" containing the bridge's history and 'themes of war and peace'.[7] This museum was partly funded by selling rock from the two piers as paperweights. The two piers were removed from the river in the summer of 1976 as they were an obstacle to navigation.

In media and popular culture