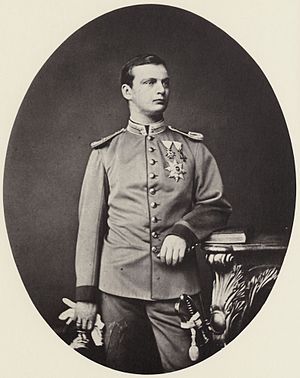 Ludwig was born in Munich, the eldest son of Prince Luitpold of Bavaria and of his wife, Archduchess Augusta of Austria (daughter of Grand Duke Leopold II of Tuscany). He was a descendant of both Louis XIV of France and William the Conqueror. Hailing from Florence, Augusta always spoke in Italian to her four children. Ludwig was named after his grandfather, King Ludwig I of Bavaria.

Ludwig spent his first years living in the Electoral rooms of the Munich Residenz and in the Wittelsbacher Palace. From 1852 to 1863, he was tutored by Ferdinand von Malaisé. When he was ten years old, the family moved to the Leuchtenberg Palace.

In 1861 at the age of sixteen, Ludwig began his military career when his uncle, King Maximilian II of Bavaria, gave him a commission as a lieutenant in the 6th Jägerbattalion. A year later, he entered the Ludwig Maximilians University of Munich, where he studied law and economics. When he was eighteen, he automatically became a member of the Senate of the Bavarian Legislature as a prince of the royal house.

In 1866, Bavaria was allied with the Austrian Empire in the Austro-Prussian War. Ludwig held the rank of Oberleutnant. He was wounded at the Battle of Helmstedt, taking a bullet in his thigh. He received the Knight's Cross 1st Class of the Bavarian Military Merit Order 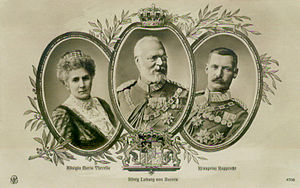 In June 1867, Ludwig visited Vienna to attend the funeral of his cousin, Archduchess Mathilda of Austria (daughter of his father's sister Princess Hildegarde of Bavaria). While there, Ludwig met Mathilde's eighteen-year-old step-cousin Maria Theresia, Archduchess of Austria-Este.

On 20 February 1868, at St. Augustine's Church in Vienna, Ludwig married Maria Theresa. She was the only daughter of the late Archduke Ferdinand Karl Viktor of Austria-Este (1821–1849) and of his wife Archduchess Elisabeth Franziska of Austria (1831–1903).

Until 1862, Ludwig's uncle had reigned as King Otto I of Greece. Although Otto had been deposed, Ludwig was still in line of succession to the Greek throne. Had he ever succeeded, this would have required that he renounce his Roman Catholic faith and become Greek Orthodox. Maria Theresa's uncle, Duke Francis V of Modena, was a staunch Roman Catholic. He required that as part of the marriage agreement Ludwig renounce his rights to the throne of Greece, and so ensure that his children would be raised Roman Catholic. In addition, the 1843 Greek Constitution forbade the Greek sovereign to be simultaneously ruler of another country. Consequently, Ludwig's younger brother Leopold technically succeeded upon their father's death to the rights of the deposed Otto I, King of Greece.[citation needed]

By his marriage, Ludwig became a wealthy man. Maria Theresa had inherited large properties from her father. She owned the estate of Sárvár in Hungary and the estate of Eiwanowitz in Moravia (now Ivanovice na Hané in the Czech Republic). The income from these estates enabled Ludwig to purchase an estate at Leutstetten in Bavaria. Over the years, Ludwig expanded the Leutstetten estate until it became one of the largest and most profitable in Bavaria. Ludwig was sometimes derided as Millibauer (dairy farmer) due to his interest in agriculture and farming.

Although they maintained a residence in Munich at the Leuchtenberg Palace, Ludwig and Maria Theresa lived mostly at Leutstetten. They had an extremely happy and devoted marriage which resulted in thirteen children:

On the death of her uncle Francis in 1875, Maria Theresa became heir to his Jacobite claim to the thrones of England and Scotland, and is called either Queen Mary IV and III or Queen Mary III by Jacobites.

Throughout his life, Ludwig took a great interest in agriculture. From 1868, he was the Honorary President of the Central Committee of the Bavarian Agricultural Society. He was also very interested in technology, particularly water power. In 1891 at his initiation, the Bavarian Canal Society was established. As a prince of the royal house he was automatically a member of the Senate of the Bavarian Legislature; there he was a great supporter of the direct right to vote.

On 12 December 1912, Ludwig's father Luitpold died. Luitpold had been an active participant in the deposition of his nephew, King Ludwig II, and had also acted as Prince Regent for his other nephew, King Otto. Although Otto had nominally been king since 1886, he had been under medical supervision since 1883 and it had long been understood that he would never be mentally capable of actively reigning. Ludwig immediately succeeded his father as regent.

Almost immediately, certain elements in the press and other groups in society called for Ludwig to take the throne himself. The Bavarian Legislature was not, however, currently in session, and did not meet until 29 September 1913. On 4 November 1913, the Legislature amended the constitution of Bavaria to include a clause specifying that if a regency for reasons of incapacity had lasted for ten years with no prospect of the king ever being able to reign, the regent could proclaim the end of the regency and assume the crown himself, with such action to be ratified by the Legislature. The amendment received broad party support in the Lower Chamber where it was carried by a vote of 122 in favour, and 27 against. In the Senate there were only six votes against the amendment. The next day, 5 November 1913, Ludwig announced that he had ended the regency and deposed Otto, and was now king in his own right. The Legislature duly ratified this action, and Ludwig took his oath on 8 November.

The constitutional amendment of 1913 brought a determining break in the continuity of the king's rule in the opinion of historians, particularly as this change had been granted by the Landtag as a House of Representatives. Historians believe this marked a definitive step from constitutional monarchy to parliamentary monarchy. Bavaria had already taken a step toward full parliamentary government a year earlier, when Georg von Hertling headed the first government that depended on a majority in the legislature.

At the outbreak of World War I in 1914 Ludwig sent an official dispatch to Berlin to express Bavaria's solidarity. Later Ludwig even claimed annexations for Bavaria (Alsace and the city of Antwerp in Belgium, to receive an access to the sea). His hidden agenda was to maintain the balance of power between Prussia and Bavaria within the German Empire after a victory.

A popularly accepted account holds that, a day or two after Germany's declaration of war,[1] Ludwig received a petition from a 25-year-old Austrian, asking for permission to join the Bavarian Army. The petition was promptly granted, and Adolf Hitler thereupon joined the Bavarian Army, eventually settling into the 16th Reserve Bavarian Infantry Regiment, where he served the remainder of the war.[2][3] 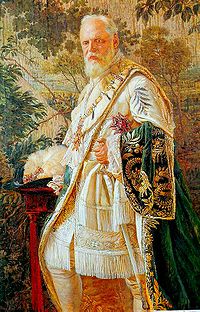 In 1917, when Germany's situation had gradually worsened due to World War I, Hertling became German Chancellor and Prime Minister of Prussia and Otto Ritter von Dandl was made Minister of State of the Royal Household and of the Exterior and President of the Council of Ministers on 11 November 1917, a title equivalent to Prime Minister of Bavaria. Accused of showing blind loyalty to Prussia, Ludwig became increasingly unpopular during the war. As the war drew to a close, the German Revolution broke out in Bavaria. On 7 November 1918, Ludwig fled from the Residenz Palace in Munich with his family and took up residence in Schloss Anif, near Salzburg, for what he hoped would be a temporary stay. He was the first of the monarchs in the German Empire to be deposed.

On 12 November 1918, a day after the Armistice, Prime Minister Dandl went to Schloss Anif to see the King. Ludwig gave Dandl the Anif declaration (Anifer Erklärung) in which he released all government officials, soldiers and civil officers from their oath of loyalty to him. He also stated that the situation made it "impossible to continue my rule," though he did not formally abdicate as Dandl demanded. The declaration was published by the newly formed republican government of Kurt Eisner when Dandl returned to Munich the next day. Eisner interpreted it as a statement of abdication and declared the Wittelsbachs deposed, ending 700 years of Wittelsbacher rule over Bavaria.[4]

In February 1919, Eisner was assassinated; fearing that he might be the victim of a counter-assassination, Ludwig fled to Hungary, later moving on to Liechtenstein and Switzerland. He returned to Bavaria in April 1920 and lived at Wildenwart Castle again. There he remained until September 1921 when he took a trip to his castle Nádasdy in Sárvár in Hungary. He died there on 18 October.

On 5 November 1921, Ludwig's body was returned to Munich together with that of his wife. In spite of fears a state funeral might spark a move to restore the monarchy, the pair were honored with one in front of the royal family, Bavarian government, military personnel, and an estimated 100,000 spectators. Burial was in the crypt of the Munich Frauenkirche alongside their royal ancestors. Prince Rupprecht did not wish to use the occasion of the passing of his father to reestablish the monarchy by force, preferring to do so by legal means. Cardinal Michael von Faulhaber, Archbishop of Munich, in his funeral speech, made a clear commitment to the monarchy while Rupprecht only declared that he had stepped into his birthright.[5]