The Ludwig von Mises Institute (LvMI), often referred to as the Mises Institute, is a tax-exempt libertarian organization located in Auburn, Alabama, United States.[5] It is named for Austrian School economist Ludwig von Mises (1881–1973). Its website states that it is dedicated to advancing "the Misesian tradition of thought through the defense of the market economy, private property, sound money, and peaceful international relations, while opposing government intervention."[1]

The Mises Institute was founded in 1982 by Llewellyn H. Rockwell, Jr., Burton Blumert and Murray Rothbard, following a split between the Cato Institute and Rothbard, who had been one of the founders of the Cato Institute.[6] Additional backing for the founding of the Institute came from Mises's wife, Margit, Henry Hazlitt, Lawrence Fertig, and Friedrich Hayek.[7][8] Through its publications, the Institute promotes anarcho-capitalist political theory and a form of heterodox economics known as praxeology ("the logic of action").[9][10] 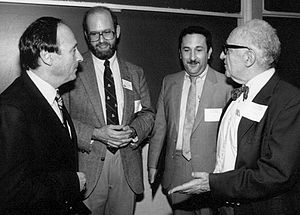 The Ludwig von Mises Institute was established in 1982 in the wake of a dispute which occurred in the early 1980s between Murray Rothbard and the Cato Institute, another libertarian organization co-founded by Rothbard.[11][12] Llewellyn Rockwell has stated that the Mises Institute met strong opposition from parties affiliated with the Koch family, Rothbard's former backers at Cato.[13][14] Rothbard was the Mises Institute's vice president and head of academic programs until his death in 1995.[15]

The Institute states that its founding ambition is to be "the research and educational center of classical liberalism, libertarian political theory, and the Austrian School of economics".[16] It has reprinted works by Mises, Rothbard, Hayek, and others. It presents the annual "Austrian Scholars Conference" and "Mises University", at which anarcho-capitalist thinkers meet, and Institute personnel teach and advise students. The Institute reports that its library holds nearly 35,000 volumes, including Rothbard's personal library.[17]

Early after its founding, the Mises Institute was located at the business department offices of Auburn University, and relocated nearby to its current site in 1998.[18] According to a story in the Wall Street Journal, the Institute chose its Auburn location for low cost of living and "good ol' Southern hospitality". The article goes on "to make an additional point", that "Southerners have always been distrustful of government," making the South a natural home for the organization's libertarian outlook.[19] The institute has a staff of 16 Senior Fellows and about 70 adjunct scholars from the United States and other countries.[20]

In a 2006 article published on the Wall Street Journal's website, Kyle Wingfield credited the Institute for helping make the "Heart of Dixie a wellspring of sensible economic thinking."[21] Wingfield pointed to the Institute's publication and promotion of the work of Mises and other Austrian economists, who he characterizes as advocating "limited government, lower taxes, stronger private property rights and less business regulation."

The Institute has published works by authors critical of various forms of government, including democracy, which was called coercive,[22] incompatible with wealth creation,[23] replete with inner contradictions,[24] and a system of legalized graft.[22] To many of these authors, the distinction lies not in the form of government, but in the degree of liberty individuals in a society actually enjoy.[22]

American Civil War and the Confederacy

A 2000 Southern Poverty Law Center "Intelligence Report" categorized the Institute as Neo-Confederate, "devoted to a radical libertarian view of government and economics."[25] In 2003, Lew Rockwell responded to this criticism by saying: "The Mises Institute recently came under fire from one of these watchdog groups that claims to oppose intolerance and hate. What was our offense? We have published revisionist accounts of the origins of the Civil War that demonstrate that the tariff bred more conflict between the South and the feds than slavery. For that, we were decried as a dangerous institutional proponent of 'neoconfederate' ideology. Why not just plain old Confederate ideology."[26]

In an article written on Institute Chairman Lew Rockwell's website, Jacob Huebert observes that socially liberal libertarians have often accused the Mises Institute of racism. He calls the charges erroneous and argues that they might stem from the support of some Institute scholars for immigration restrictions, its support of Confederate secession, or its uncompromising stand on libertarian issues.[28]

In 2003, Chip Berlet of the Southern Poverty Law Center (SPLC) described the Mises Institute as "a major center promoting libertarian political theory and the Austrian School of free market economics", also noting Rothbard's opposition to child labor laws and the anti-immigrant views of other Institute scholars.[29] Heidi Beirich, also with the SPLC, describes the Institute as "a hard-right libertarian foundation".[30]

The Mises Institute makes available a large number of books, journal articles, and other writings online,[31] and archives various writings on its website. Its Quarterly Journal of Austrian Economics discusses Austrian economics.[32] It published the Journal of Libertarian Studies from 1977 to 2008.[33] The Mises Review has been published since 1995, the quarterly review of literature in the social sciences being currently edited by David Gordon.

The Mises Institute's website describes its "Are You An Austrian?" quiz as testing an individual's economic reasoning.[34] The quiz was criticized by Arnold Kling, who wrote, "the 'Are you an Austrian?' quiz does not distinguish between knowledge of doctrine and belief in doctrine. To me, this is symptomatic of a sect, which focuses on doctrinal purity above all else. For a sect, to know is to believe, and to believe is to know."[35]

The Institute presents the annual Schlarbaum Prize for "lifetime defense of liberty", a $10,000 prize given to a public intellectual or scholar. Laureates have included U.S. Congressman Ron Paul and economists Walter Block and Hans-Hermann Hoppe. Other honors include the Murray Rothbard Medal (also won by Block, Hoppe and Paul, as well as by economic historian Gary North), the Elgin Groseclose Award (a $20 Liberty Head Double Eagle) for money writing, and the Fertig Prize.[36]