From Infogalactic: the planetary knowledge core
Jump to: navigation, search
For other uses, see Lugo (disambiguation).

Lugo (Galician pronunciation: [ˈluɣo]) is a city in northwestern Spain in the autonomous community of Galicia. It is the capital of the province of Lugo. The municipality had a population of 98,560 in 2014, which makes it the fourth most populous city in Galicia.

Lugo is the only city in the world to be surrounded by completely intact Roman walls, which reach a height of 10 to 15 metres (33 to 49 feet) along a 2,117-metre (6,946 ft) circuit ringed with 71 towers. The walk along the top is continuous round the circuit, and features ten gates. These 3rd century walls are protected by UNESCO as a World Heritage Site. The bridge over the Minho is essentially of Roman date, though many repairs over the centuries have effaced its Roman character. 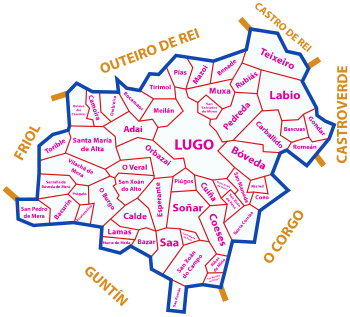 The town lies on a hill surrounded by the rivers Minho, Rato and Chanca. The difference in altitude between downtown and the river banks is considerable, while in the center of the city's altitude of 465 meters above sea level, at the height of the Miño River Walk is the altitude of only 364 metres (1,194 feet). The municipality of Lugo is the second largest in Galicia, with 329.78 square kilometres (127.33 sq mi) and 59 parishes. It should be emphasized that the outline of the city was declared a Biosphere Reserve by UNESCO on 7 November 2002, this being the most important recognition at international level regarding the conservation of landscapes and habitats of this Atlantic European region.

Like most of Galicia Lugo has an humid oceanic climate, with drier summers, on the boundary between Csb and Cfb in the Köppen climate classification. Due to its remoteness from the Atlantic, its annual precipitation of 1,084 millimetres (42.7 in) can be considered low compared with areas of the Rias Baixas and Santiago de Compostela. The highest temperature recorded in history, 39.6 °C (103 °F), occurred in August 1961 and the lowest temperature was −13.2 °C (8.2 °F) in February 1983.[3] The city has an average of six days of snow per year, which is a contrast to coastal cities of Galicia which have not received snow in modern times.

Overview of the Cathedral of Santa María in the city of Lugo.

The city was probably founded by Celtic inhabitants of the region and dedicated to Lugos,[5] a pan-Celtic God of light, oaths and arts. Later conquered by Paulus Fabius Maximus and called Lucus Augusti[6] in 13 BC on the positioning of a Roman military camp,[nb 1] while the Roman Empire completed the conquest, in the North, of the Iberian Peninsula. Situated in what was the Roman province of Hispania Tarraconensis, it was the chief town of the tribe of the Capori. Though small it was the most important Roman town in what became Gallaecia during the Roman period, the seat of a conventus, one of three in Gallaecia, and later became one of the two capitals of Gallaecia, and gave its name to the Callaïci Lucenses. It was centrally situated in a large gold mining region, which during the Roman period was very active. The Conventus Lucensis, according to Pliny, began at the river Navilubio, and contained 16 peoples; besides the Celtici and Lebuni. Though these tribes were not powerful, and their names "barbarous" to Roman ears, there were among them 166,000 freemen.[7] The city stood on one of the upper branches of the Minius (modern Minho), on the road from Bracara to Asturica,[8] and had some famous baths, near from the bridge across the Minho.

Lucus was the seat of a bishopric by the later 5th century at the latest and remained an administrative center under the Suebi and Visigoths, before going into such a decline that the site was found to be deserted in the middle of the 8th century by Bishop Odoario, who set about reviving it. 10th century attempts at rebuilding its casas destructas (abandoned tenements) suggest that it remained a town only on paper: the seat of a bishopric, administered by a count, from which royal charters were issued. "Its commercial and industrial role was insignificant", Richard Fletcher wrote of 11th century Lugo.[9]

During the Middle Ages Lugo, like Santiago de Compostela, was a center of pilgrimage, because the cathedral had the special privilege, it still retains today, of exposing to the public the consecrated host twenty-four hours a day. In the 18th century Lugo was granted the privilege of organizing the fairs of St. Froilán. During the Modern Age, Lugo had a certain supremacy, although other nearby towns such as Mondoñedo or Ribadeo disputed it. It was not until the division of the state into provinces in 1833 and the creation of provincial governments that Lugo has become the most important town from the province of Lugo, because of its capital status. This rise has been bolstered by the arrival of the first railroad to the city in 1875.

During the 20th century the city continued to grow as the administration and services center of the province. In 1936, when the Civil War broke out, the city became quickly under the Nationalists control. In the 1970s the city met important reforms, like the development of the Ceao Industrial Area (1979) and the complete restoration of the Roman walls.

Infanta Elena, the elder daughter of King Juan Carlos and Queen Sofía of Spain and fourth in the line of succession to the Spanish throne, has been Duchess of Lugo since 1995.

In 2000, the recognition of the Roman walls on UNESCO's World Heritage Site was an important event in the city. 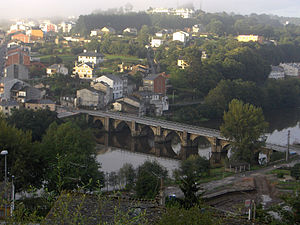 Lugo is a city of services. The main activities are commercial, the administration (offices of the autonomous and central Governments) and educational and health services (the recently opened Hospital Universitario Lucus Augusti is the largest in Galicia).[10] The steady increase of population of the city has coincided with the development of the major economic sectors of the municipality. Industry is scarce and almost exclusively dedicated to the processing of agricultural products (dairy, meat, timber ...).

There is a shopping center on the outskirts of the city (As Termas), with an Eroski hypermarket, cinemas, clothing stores like H&M, NewYorker or Cortefiel and many restaurants and fast food chains like McDonald's. A new shopping center (Abella) is under construction, which will host an E.Leclerc hypermarket.

The University of Santiago de Compostela has several faculties at its Lugo Campus, one of the most important being the Faculty of Veterinary sciences, one of the leading in its field in Spain.

The daily newspaper gl (El Progreso),[11] is published in the city. It's the most read newspaper in the province of Lugo.

There is a private aerodrome in the nearby town of Rozas, owned by the Spanish Ministry of Defence and administered by Real Aero Club de Lugo. In 2011, the Ministry of Defence transferred the installations to INTA, Spain's space agency, in order to convert it into a center of aeronautical research,[12] 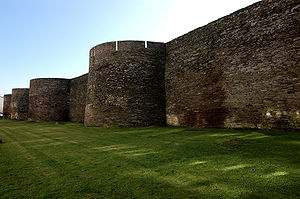 Roman walls of Lugo
Lugo is the only city in the world to be surrounded by completely intact Roman walls, which reach a height of 10 to 15 metres along a 2117 m circuit ringed with 71 towers. The walk along the top is continuous round the circuit, and features ten gates. These 3rd century walls are protected by UNESCO as a World Heritage Site. The bridge over the Minho is essentially of Roman date, though many repairs over the centuries have effaced its Roman character.

Other sources suggest that the name Lucus Augusti comes from the Latin word Lucus, which means "sacred grove", or "sacred forest", as the city was founded on the place of a small grove.

Besides the walls, sights include:

The most popular and known professional team of the city is the basketball team CB Breogán, currently playing in LEB league, the second division in Spain, although it has played many seasons in Liga ACB the top Spanish basketball league. The team occupies the 9th position in the historical ranking of that league.

Futsal is also popular in Lugo, represented by Azkar Lugo, which plays in Spanish first division.

Lugo is twinned with