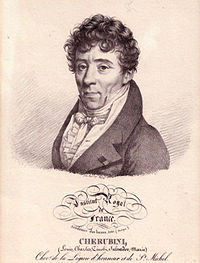 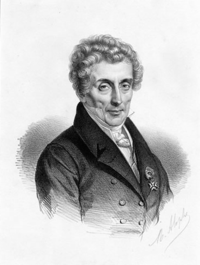 Luigi Cherubini (Italian: [luˈiːdʒi keruˈbiːni]; 8 or 14 September[1] 1760 – 15 March 1842) was an Italian composer who spent most of his working life in France. His most significant compositions are operas and sacred music. Beethoven regarded Cherubini as the greatest of his contemporaries.[2]

Cherubini was born Maria Luigi Carlo Zenobio Salvatore Cherubini in Florence in 1760. There is uncertainty about his exact date of birth. Although 14 September is sometimes stated, evidence from baptismal records and Cherubini himself suggests the 8th is correct. Perhaps the strongest evidence is his first name, Maria, which is traditional for a child born on 8 September, feast-day of the Nativity of the Virgin.[1] His instruction in music began at the age of six with his father, Bartolomeo, maestro al cembalo ("Master of the harpsichord", in other words, ensemble leader from the harpsichord). Considered a child prodigy, Cherubini studied counterpoint and dramatic style at an early age. By the time he was thirteen, he had composed several religious works.

In 1780, he was awarded a scholarship by the Grand Duke of Tuscany to study music in Bologna and Milan.[1] Cherubini's early opera serie used libretti by Apostolo Zeno, Metastasio (Pietro Trapassi), and others that adhered closely to standard dramatic conventions. His music was strongly influenced by Niccolò Jommelli, Tommaso Traetta, and Antonio Sacchini, who were the leading composers of the day. The first of his two comic works, Lo sposo di tre e marito di nessuna, premiered at a Venetian theater in November 1783.[1]

Feeling constrained by Italian traditions and eager to experiment, Cherubini traveled to London in 1785 where he produced two opere serie and an opera buffa for the King's Theatre. In the same year, he made an excursion to Paris with his friend the violinist Giovanni Battista Viotti, who presented him to Marie Antoinette and Parisian society. Cherubini received an important commission to write Démophoon to a French libretto by Jean-François Marmontel that would be his first tragédie en musique. Except for a brief return trip to London and to Turin for an opera seria commissioned by King Victor Amadeus III, Cherubini spent the rest of his life in France[1] where he was initiated into Grand Orient de France "Saint-Jean de Palestine" Masonic Lodge in 1784.

Cherubini adopted the French version of his name, Marie-Louis-Charles-Zénobi-Salvador Cherubini; this appears in all extant documents that show his full name after 1790,[1] though his Italian name is favored nowadays. Performances of Démophon were favorably received at the Grand Opéra in 1788. With Viotti's help, the Théâtre de Monsieur in the Tuileries appointed Cherubini as its director in 1789. Three years later, after a move to the rue Feydeau and the fall of the monarchy, the company became known as the Théâtre Feydeau. This position gave Cherubini the opportunity to read countless libretti and choose one that best suited his temperament.

Cherubini's music began to show more originality and daring. His first major success was Lodoïska (1791), which was admired for its realistic heroism. This was followed by Eliza (1794), set in the Swiss Alps, and Médée (1797), Cherubini's best-known work. Les deux journées (1800), in which Cherubini simplified his style, was a popular success. These and other operas were premièred at the Théâtre Feydeau or the Opéra-Comique. Feeling financially secure, he married Anne Cécile Tourette in 1794 and began a family of three children.

The fallout from the French Revolution affected Cherubini until the end of his life. Politics forced him to hide his connections with the former aristocracy and seek governmental appointments. Although Napoléon found him too complex, Cherubini wrote at least one patriotic work per year for more than a decade.[1] He was appointed Napoléon's director of music in Vienna for part of 1805 and 1806, whereupon he conducted several of his works in that city.

From opera to church music

After Les deux journées, Parisian audiences began to favor younger composers such as Boieldieu. Cherubini's opera-ballet Anacréon was an outright failure and most stage works after it did not achieve success. Faniska, produced in 1806, was an exception, receiving an enthusiastic response, in particular by Haydn and Beethoven. Les Abencérages (1813), an heroic drama set in Spain during the last days of the Moorish kingdom of Granada, was Cherubini's attempt to compete with Spontini's La vestale; it received critical praise but few performances.

Disappointed with his lack of acclaim in the theater, Cherubini turned increasingly to church music, writing seven masses, two requiems, and many shorter pieces. During this period (under the restored monarchy) he was appointed Surintendant de la Musique du Roi, a position he would hold until the fall of Charles X (1830). In 1815 London's Royal Philharmonic Society commissioned him to write a symphony, an overture, and a composition for chorus and orchestra, the performances of which he went especially to London to conduct, increasing his fame.

Cherubini's Requiem in C minor (1816), commemorating the anniversary of the execution of King Louis XVI of France, was a huge success. The work was greatly admired by Beethoven, Schumann and Brahms. In 1836, Cherubini wrote a Requiem in D minor to be performed at his own funeral. It is for male choir only, as the religious authorities had criticised his use of female voices in the earlier work. 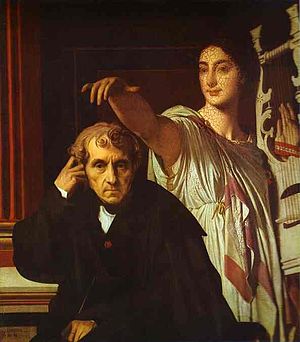 Portrait by J. D. Ingres (Louvre). The crowning Muse displeased Cherubini and is blacked out in some copies.

In 1822, Cherubini became director of the Conservatoire and completed his textbook, Cours de contrepoint et de fugue, in 1835. His role at the Conservatoire would bring him into conflict with the young Hector Berlioz, who went on to portray the old composer in his memoirs as a crotchety pedant. Some critics, such as Basil Deane, maintain that Berlioz's depiction has distorted Cherubini's image with posterity. There are many allusions to Cherubini's personal irritability among his contemporaries; Adolphe Adam wrote, "some maintain his temper was very even, because he was always angry." Nevertheless, Cherubini had many friends, including Szymanowska, Rossini, Chopin and, above all, the artist Ingres. The two had mutual interests: Cherubini was a keen amateur painter and Ingres enjoyed practising the violin. In 1841, Ingres produced the most celebrated portrait of the old composer. 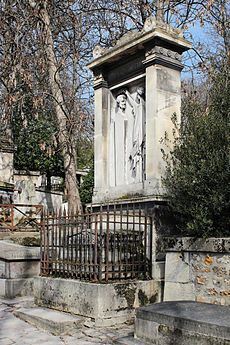 Although chamber music does not make up a large portion of his output, what he did write was important. Wilhelm Altmann, writing in his Handbuch für Streichquartettspieler (Handbook for String Quartet Players) about Cherubini's six string quartets, states that they are first rate and regarded Nos. 1 and 3 as masterworks. His String Quintet for two violins, viola and two cellos is also considered a first rate work.

Cherubini died in Paris in 1842 at age 81 and is buried at Père Lachaise Cemetery, just four metres from his friend Chopin. His tomb was designed by the architect Achille Leclère and includes a figure by the sculptor Augustin-Alexandre Dumont representing "Music" crowning a bust of the composer with a wreath.

Masses and sections of the mass

Motets and other choral works