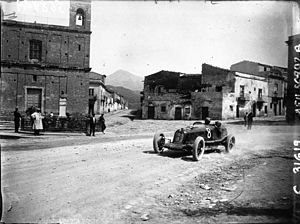 Fagioli at the 1928 Targa Florio

Luigi Cristiano Fagioli (Italian pronunciation: [luˈidʒi faˈdʒɔli]; 9 June 1898 – 20 June 1952), nicknamed "the Abruzzi robber",[2] was an Italian motor racing driver. He is currently the oldest driver to win a race in Formula One.

Born in the small city of Osimo, in the Marche region of central Italy, as a boy Luigi Fagioli was fascinated by the relatively new invention of the automobile and the ensuing racing. Blessed with great natural driving instincts, a young Fagioli spent several years participating in hillclimbing and sports car races before entering Grand Prix racing in 1926. By 1930, his racing success led to an opportunity to join the Maserati team on the Grand Prix motor racing circuit. He immediately made his presence felt, winning the Coppa Ciano and Circuit of Avellino. In April of the following year he went head to head with Louis Chiron and his Bugatti Type 51 at the Monaco Grand Prix. In what is one of racing's most famous battles, Chiron eventually won but Fagioli showed how skilled he was in a car geared for great speed on long stretches, not the tight twists and short runs of Monte Carlo. Fagioli went on to take the victory at the Autodromo Nazionale Monza in Monza, Italy beating Chiron as well as fellow Italian greats, Achille Varzi and Tazio Nuvolari. In 1932, Fagioli won the Grand Prix of Rome driving for Maserati but for the 1933 season he was signed by the Alfa Romeo team of Scuderia Ferrari. Driving an Alfa Romeo Tipo B P3, he won the Coppa Acerbo, the Grand Prix du Comminges, and the Italian Grand Prix.

A supremely confident Fagioli often displayed a fiery temper and retaliated against other drivers on the track when he felt they had done something wrong. Also, he frequently took chances that others might not and as such he developed a somewhat negative reputation after he had several significant race crashes. Nevertheless, his talents were considerable and for the 1934 season he was lured away by Mercedes to drive one of their Silver Arrows with the brilliant Hermann Lang as his chief mechanic. The move proved successful for Fagioli but his relationship with the German team manager and co-drivers was extremely difficult. In his very first race for Mercedes, one their cars dominated, a furious Fagioli abandoned his vehicle after having been given orders by team manager Alfred Neubauer to stay in second place and allow fellow Mercedes driver Manfred von Brauchitsch to win. Despite the problems, Fagioli remained part of the German team, earning his second consecutive Coppa Acerbo and together with Rudolf Caracciola, drove a Mercedes W25A to claim his second straight Italian Grand Prix title. Following this, Fagioli went on to take first place at the Spanish Grand Prix at the Circuito Lasarte.

For the 1935 racing season, his factory Mercedes was upgraded to a W25B model with which he captured the Monaco Grand Prix and the AVUS and Penya Rhin Grand Prix races. However, his relationship with his team-mates worsened, in particular, Rudolf Caracciola and in some races Fagioli tried to pass Caracciola against team orders. He left Mercedes at the end of the 1936 season and joined Auto Union where his rivalry with Caracciola escalated, culminating at the Tripoli Grand Prix when Fagioli physically attacked his former team-mate.

Health problems, including crippling rheumatism, soon began to severely affect Luigi Fagioli's racing ability. At the Coppa Acerbo he needed the aid of a cane just to walk and had no choice but to drop out of the race. With his health somewhat improved, following the end of World War II, 52-year-old Luigi Fagioli joined Alfa-Romeo's 1950 Formula One team, earning five podium finishes in six races en route to finishing a remarkable third overall in the first ever FIA World Championship. He even entered the final round as one of three drivers in contention for the title, despite not winning a race. His only Grand Prix of 1951 was his last, but he nevertheless won the French Grand Prix with Juan-Manuel Fangio, earning the distinction of being the oldest person to ever win a Formula One race.

For 1952, Fagioli signed with Lancia to drive sports cars and took great personal delight by finishing in third place in the Mille Miglia ahead of arch rival Rudolf Caracciola. Shortly after, while practicing for a touring car race to be held as part of the Monaco Grand Prix, he had what appeared to be a minor crash: however, his internal injuries were such that he died in hospital three weeks later.

Luigi Fagioli ranks as one of Italy's greatest race car drivers, and has the second-highest percentage of podium finishes in the Formula One World Championship (85.71%), after "one-time wonder" Dorino Serafini.[3]

* Two shared drives with Juan Manuel Fangio, resulting in positions 1 and 11, respectively. Each driver scored half points for the win.