After winning the World Cup for Brazil in 2002, he was manager of the Portugal national team from 12 July 2003 to 30 June 2008. He led them to the final of the European Championship in 2004, which they lost 0–1 to Greece, and to a fourth-place finish in the World Cup in 2006. Scolari also led Portugal in the European Championship in 2008, but resigned after losing 2–3 to Germany in the second round. After a return to club management, at Chelsea in the Premier League, Scolari was hired again as the manager of the Brazil national team in 2012. He led them to victory at the 2013 Confederations Cup, and to the semi-final in the 2014 World Cup. After the Brazil national team finished fourth overall from a 1–7 loss to Germany in the semi-finals, and a 0–3 loss to the Netherlands in the third-place match, the Confederação Brasileira de Futebol decided not to renew his contract. In 2015, he managed Guangzhu Evergrande to claim 2015 Chinese Super League and 2015 AFC Champions League in his first season with the club.[1]

Along with being Brazilian, Scolari is also an Italian citizen, since he descends from Italian immigrants.[2]

Scolari was born in Passo Fundo, Rio Grande do Sul. A defender regarded as more uncompromising than skillful, he was known among his contemporaries as "perna-de-pau" (literally translated as "wooden leg", a Brazilian Portuguese term for a bad player), Scolari followed in the footsteps of his father Benjamin, who was also a Brazilian professional footballer.[3] His playing career encompassed spells with Caxias, Juventude, Novo Hamburgo, and CSA, and often captained his sides. It was with CSA that he won his only major title as a player – the Alagoano state championship.

Upon retiring as a player in 1982, he was appointed manager of CSA, winning the Alagoano state championship in his first season. After spells with Juventude (twice), Brasil de Pelotas and Al-Shabab of Saudi Arabia, he moved to Grêmio, one of the biggest and most traditional clubs in Brazil, where he won the 1987 Gaúcho state championship and Goias, another big and traditional Brazilian club.

He then had a two-year stint in charge of Kuwaiti side Al Qadisiya Kuwait, with whom he won the prestigious Kuwait Emir Cup in 1989. This was followed by a brief stint as manager of the Kuwait national team, winning the 10th Gulf Cup in Kuwait.

Scolari returned to Brazil to coach Coritiba. He stayed for just three matches, losing all of them. After the last loss, he ran away from the club by means of boarding the winner's team bus back to his hometown and did not return even to collect wages.[4]

Criciúma and return to Kuwait

Scolari coached Criciúma to their first major national title Copa do Brasil. He returned to club management in the Middle East, managing Al-Ahli and a second spell at Al Qadisiya.

In 1993, Scolari returned to Grêmio, where he was criticized by the Brazilian media for playing a non-Brazilian pragmatic style of football. He won six titles in only three years including the Copa Libertadores in 1995 which qualified them for the Intercontinental Cup, which they lost to AFC Ajax on penalties.[5][6] The following year they won the Brazilian Championship.[7]

His team featured no real superstar and depended on workman-like players such as Paraguayan right back Francisco Arce (of whom he later took to Palmeiras), the tough-tackling midfielder Dinho, Paulo Nunes, and centre forward Mário Jardel.[7]

In 1997, Scolari became manager of J. League side Júbilo Iwata, but left after eleven games and shortly afterwards took charge of Palmeiras back in Brazil.

In three years, Scolari led Palmeiras to the Copa do Brasil, the Mercosur Cup, and their first Copa Libertadores title with a win on penalties over Deportivo Cali of Colombia. They were also runners-up to Manchester United in the 1999 Intercontinental Cup. He was named South American Coach of the Year for 1999.

In 2000, Scolari was appointed to manage Cruzeiro, coaching them for a year.

In June 2001, Scolari was appointed manager of his native Brazil, who with five matches remaining were in danger of not qualifying for the 2002 FIFA World Cup. Despite losing his first match 1–0 to Uruguay, Scolari eventually guided the team to qualification.

In the build-up to the finals, Scolari refused to include veteran striker Romário in his squad, despite public pressure and a tearful appeal from the player himself.[8] Brazil entered the tournament unfancied, but wins over Turkey, China PR, Costa Rica, Belgium, England, and Turkey again took them to the final, where they beat Germany 2–0 with two goals from Ronaldo to win their fifth FIFA World Cup title, at the end of 2002.[9] 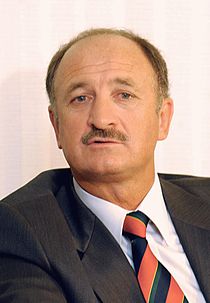 Scolari took over as manager of Portugal in 2003 and oversaw their preparations as host nation for UEFA Euro 2004. In the finals, Portugal got through the group stages and saw off England in the quarter-finals on penalties before beating the Netherlands in the semi-finals. However, in the final, they were beaten in a massive 1–0 upset by tournament underdogs Greece.[10]

Scolari managed Portugal in the 2006 World Cup in Germany where they reached the semi-finals, again coming out victorious in the quarter-finals against England. But they did not reach the final due to a semi-final defeat against eventual runners-up France. Following the tournament, Scolari was very heavily linked with the England manager's job, but he ultimately opted to remain as Portugal coach.

Scolari took Portugal to Euro 2008 where they reached the knock-out stages by winning Group A before being eliminated by Germany in the quarter-finals. During the tournament, he announced that he would be joining English Premier League side Chelsea for the 2008–09 season. 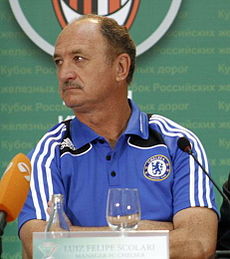 Luiz Felipe Scolari with Chelsea in 2008.

Scolari took over as manager of Chelsea on 1 July 2008. This was announced shortly after Portugal's Euro 2008 match against the Czech Republic on 11 June. With this appointment, Scolari became the first World Cup winning manager to manage in the Premier League. In previous press conferences, Scolari had talked about "tantrums" and "triumphs" and had a reputation as a tough and unpredictable person.[11] When asked whether his decision to join Chelsea was financial he responded "Yes, that is one of the reasons." But he added: "I'm 59 and I don't want to work as a coach until I'm 70. I want to retire in four or five years, so it was a financial matter but there are other things." He also said: "I could offer my son the opportunity to study elsewhere. You only get this kind of opportunity once so you take it or leave it, but it was not only financial."[12]

Scolari later said that he had turned down an offer to manage Manchester City.[13]

Scolari's first match in charge of Chelsea was a friendly match against Chinese side Guangzhou Pharmaceutical; Chelsea won 4–0.[14] He made FC Barcelona midfielder Deco, a player he was familiar with on the Portuguese national team, his first signing for a fee of around £8 million,[15] but was subsequently frustrated in his attempts to sign Brazilian international Robinho from Real Madrid.[16]

Scolari's career as Chelsea manager in the Premier League got off to a good start with a 4–0 victory over 2008 FA Cup winners Portsmouth.[17]

Under Scolari, Chelsea had the biggest away win of the club in five years in which Chelsea won 5–0 at the Riverside Stadium in October 2008. It was also the club's biggest win ever at Middlesbrough.

Scolari was sacked as Chelsea manager on 9 February 2009[18] after a run of poor form culminating in a 2–0 defeat at Liverpool followed by frustrating 0–0 home draw with Hull City. The club's stated reason for his removal was that "the results and performances of the team appeared to be deteriorating at a key time in the season."[19] Scolari's replacement at Chelsea for the remainder of the 2008–2009 season was the Dutch Guus Hiddink, who was also managing the Russian national team at the same time. 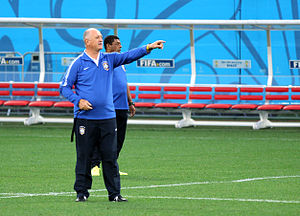 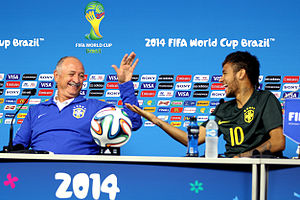 Luiz Felipe Scolari with Brazilian forward Neymar at a press conference at the 2014 FIFA World Cup.

On 6 June 2009, he was spotted in attendance (with FC Bunyodkor player Rivaldo) at Uzbekistan's World Cup qualifier against Japan, and on 8 June 2009, Scolari revealed that he had signed an 18-month contract with the Uzbekistani champions Bunyodkor.[20] The contract made Scolari the highest paid football manager in the world, earning €13 million a year.[21]

He left by mutual consent on 29 May 2010 after failing to guide Bunyodkor past the last 16 in the AFC Champions League although he cited concern regarding his son's education as the key reason.

On 13 June 2010, Scolari was announced Palmeiras' new manager. He signed a two-and-a-half year contract.[22] He won the Copa do Brasil with the team. On 13 September 2012, Scolari, after bad results in 2012 Campeonato Brasileiro, left by mutual consent.[23]

On 28 November 2012, after more than two months without a club, Scolari returned to management with the Brazil National Football Team, replacing the outgoing Mano Menezes.[24][25] He was tasked with winning the 2014 FIFA World Cup, a competition he had previous success in, having won the 2002 FIFA World Cup.[26][27] He lost his first game upon his return to England 2–1 at the Wembley Stadium.

He beat Japan 3–0 in the opening game of the 2013 FIFA Confederations Cup, with goals from Neymar on the 3rd minute, Paulinho on the 48th minute, and Jô on the 90th minute. Three days later, his team won 2–0 over Mexico, with Neymar scoring again on the 9th minute.

He defeated Uruguay 2–1 in the semi-final match of the 2013 FIFA Confederations Cup in a tough draw, with goals from Fred in the 41st minute paired with a late goal from Paulinho in the 86th minute. In the final, Brazil defeated Spain 3–0 with two goals from Fred and one from Neymar.

At the 2014 FIFA World Cup, Brazil were defeated 7–1 by Germany at the semi-final stage – equaling their biggest defeat at the World Cup, the most goals conceded in their World Cup history, and its first home loss in a competitive match since 1975.[28] Scolari described this as "the worst day of my life" and took responsibility for it.[29]

On 14 July 2014, following a further defeat, this time by 3–0 in the World Cup's third place playoff match against the Netherlands, Scolari resigned from his position as Brazilian manager.[30][31][32]

On the same day, Wagner Ribeiro, the personal agent of Brazil's star player, Neymar, was reported as describing in detail to the media what he regarded as Scolari's very poor coaching career around the world, and ended by calling Scolari "an old jerk, arrogant, repulsive, conceited and ridiculous".[33]

On 29 July 2014, Scolari signed with Grêmio. He was officially unveiled by the club the following day at the Arena do Grêmio. On 19 May 2015 Scolari resigned from his position after a poor start to the season.[34]

On 4 June 2015, Scolari was appointed head coach of Chinese Super League champions Guangzhou Evergrande, signing a two-and-a-half-year contract.[35] After just four months in charge Scolari led the club to victory in the 2015 Chinese Super League and AFC Champions League defeating Cosmin Olăroiu's Al-Ahli side with a 1–0 aggregate win in the final.[36]

In the 2002 FIFA World Cup, he gave each of his players photocopies of chapters from Sun Tzu's The Art of War, a Chinese military strategy treatise written during the 6th century BC. He also gave the team recordings of Ivete Sangalo Festa videoclip to enforce the Brazilian spirit and motivate the team engagement.[37]

During his career the media has been fond of pointing out Scolari's facial resemblance to actor Gene Hackman and Marlon Brando's portrayal of Don Vito Corleone in the film The Godfather.

Scolari also holds Italian citizenship, since his family emigrated from Veneto. He is a fan of Grêmio,[38] and was reported to be a fan of Nottingham Forest, having watched their successes under Brian Clough in the 1970s.[39]

Scolari is a Roman Catholic.[40] 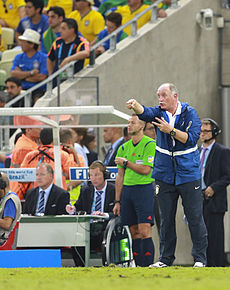