Luke the Evangelist (Ancient Greek: Λουκᾶς, Loukãs) is one of the Four Evangelists—the four authors of canonical Gospels of Jesus Christ. Luke was a native of the Hellenistic city of Antioch in Syria. The early church fathers ascribed to him authorship of both the Gospel according to Luke and the book of Acts of the Apostles, which originally formed a single literary work, referred to as Luke–Acts. Prominent figures in early Christianity such as Jerome and Eusebius later reaffirmed his authorship, although the fragile evidence of the identity of the author of the works has led to discussion in scholarly circles, both secular and religious.

The New Testament mentions Luke briefly a few times, and the Pauline epistle to the Colossians refers to him as a doctor; thus he is thought to have been both a physician and a disciple of Paul. Christians since the faith's early years have regarded him as a saint. He is believed to have died a martyr, although accounts of the events do vary.

The Roman Catholic Church and other major denominations venerate him as Saint Luke the Evangelist and as a patron saint of artists, physicians, surgeons, students and butchers; his feast day takes place on 18 October. 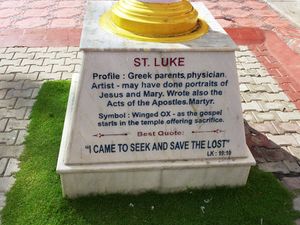 Base of a pillar at Basilica of the Sacred Heart of Jesus, Puducherry, India

It is believed by many scholars that Luke was a Greek physician who lived in the Greek city of Antioch in Ancient Syria, though some other scholars and theologians think Luke was a Hellenic Jew.[2][3] This Luke is mentioned in Paul's Epistle to Philemon (v.24), and in two other epistles which are traditionally ascribed to Paul (Epistle to the Colossians 4:14 and Second Epistle to Timothy 4:11).[4][5][6][7][8]

His earliest notice is in Paul's Epistle to Philemon—Philemon 1:24. He is also mentioned in Colossians 4:14 and 2Timothy 4:11, two works commonly ascribed to Paul. The next earliest account of Luke is in the Anti-Marcionite Prologue to the Gospel of Luke, a document once thought to date to the 2nd century, but which has more recently been dated to the later 4th century.[citation needed] Helmut Koester, however, claims that the following part—the only part preserved in the original Greek—may have been composed in the late 2nd century:

Luke, was born in Antioch, by profession, was a physician.[9] He had become a disciple of the apostle Paul and later followed Paul until his [Paul's] martyrdom. Having served the Lord continuously, unmarried and without children, filled with the Holy Spirit he died at the age of 84 years. (p. 335) 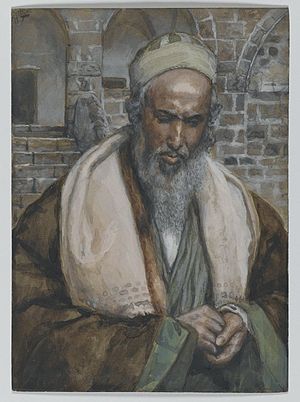 Epiphanius states that Luke was one of the Seventy Apostles (Panarion 51.11), and John Chrysostom indicates at one point that the "brother" Paul mentions in the Second Epistle to the Corinthians 8:18 is either Luke or Barnabas.[citation needed]

If one accepts that Luke was in fact the author of the Gospel bearing his name and also the Acts of the Apostles, certain details of his personal life can be reasonably assumed. While he does exclude himself from those who were eyewitnesses to Jesus' ministry, he repeatedly uses the word "we" in describing the Pauline missions in Acts of the Apostles, indicating that he was personally there at those times.[10]

There is similar evidence that Luke resided in Troas, the province which included the ruins of ancient Troy, in that he writes in Acts in the third person about Paul and his travels until they get to Troas, where he switches to the first person plural. The "we" section of Acts continues until the group leaves Philippi, when his writing goes back to the third person. This change happens again when the group returns to Philippi. There are three "we sections" in Acts, all following this rule. Luke never stated, however, that he lived in Troas, and this is the only evidence that he did.[citation needed] 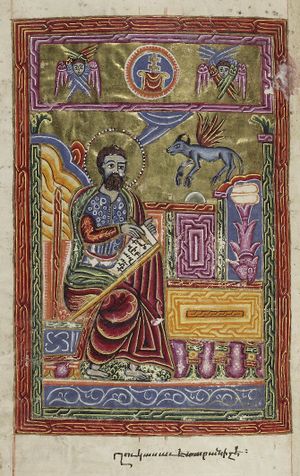 The composition of the writings, as well as the range of vocabulary used, indicate that the author was an educated man. A quote in the Letter of Paul to the Colossians differentiates between Luke and other colleagues "of the circumcision."

10 My fellow prisoner Aristarchus sends you his greetings, as does Mark, the cousin of Barnabas. 11 Jesus, who is called Justus, also sends greetings. These are the only Jews among my co-workers for the kingdom of God, and they have proved a comfort to me. ... 14 Our dear friend Luke, the doctor, and Demas send greetings. Colossians 4:10–11,14.

This comment has traditionally caused commentators to conclude that Luke was a Gentile. If this were true, it would make Luke the only writer of the New Testament who can clearly be identified as not being Jewish. However, that is not the only possibility. Although Luke is considered likely to be a Gentile Christian, some scholars believe him to be a Hellenized Jew.[2][3][11] The phrase could just as easily be used to differentiate between those Christians who strictly observed the rituals of Judaism and those who did not.[10]

Luke's presence in Rome with the Apostle Paul near the end of Paul's life was attested by 2 Timothy 4:11: "Only Luke is with me". In the last chapter of the Book of Acts, widely attributed to Luke, we find several accounts in the first person also affirming Luke's presence in Rome including Acts 28:16: "And when we came to Rome..." According to some accounts,[who?] Luke also contributed to the authorship of the Epistle to the Hebrews.[citation needed]

Luke died at age 84 in Boeotia, according to a "fairly early and widespread tradition".[12] According to Nikephoros Kallistos Xanthopoulos (Ecclesiastical History 14th century AD., Migne P.G. 145, 876) and others, Luke's tomb was located in Thebes, whence his relics were transferred to Constantinople in the year 357.[citation needed]

Luke as a historian

See also: Historical reliability of the Acts of the Apostles, Census of Quirinius, and Chronology of Jesus 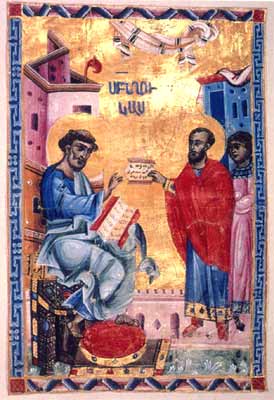 Most scholars understand Luke's works (Luke-Acts) in the tradition of Greek historiography.[13] The preface of The Gospel of Luke[14] drawing on historical investigation identified the work to the readers as belonging to the genre of history.[15] There is some disagreement about how best to treat Luke's writings, with some historians regarding Luke as highly accurate, and others taking a more critical approach.

Based on his accurate description of towns, cities and islands, as well as correctly naming various official titles, archaeologist Sir William Ramsay wrote that "Luke is a historian of the first rank; not merely are his statements of fact trustworthy... [he] should be placed along with the very greatest of historians."[16] Professor of Classics at Auckland University, E.M. Blaiklock, wrote: "For accuracy of detail, and for evocation of atmosphere, Luke stands, in fact, with Thucydides. The Acts of the Apostles is not shoddy product of pious imagining, but a trustworthy record... it was the spadework of archaeology which first revealed the truth."[17] New Testament scholar Colin Hemer has made a number of advancements in understanding the historical nature and accuracy of Luke's writings.[18]

On the purpose of Acts, New Testament Scholar Luke Timothy Johnson has noted that "Luke's account is selected and shaped to suit his apologetic interests, not in defiance of but in conformity to ancient standards of historiography."[19] Such a position is shared by most commentators such as Richard Heard who sees historical deficiencies as arising from "special objects in writing and to the limitations of his sources of information."[20] However, during modern times, Luke's competence as a historian is questioned, although that depends on one's a priori view of the supernatural. A materialist would see a narrative that relates supernatural, fantastic things like angels, demons etc., as problematic as a historical source. And it is understood that Luke did not intend to record history. His intention was to proclaim and to persuade. Many see this understanding as the final nail in Luke the historian's coffin.[21] Robert M. Grant has noted that although Luke saw himself within the historical tradition, his work contains a number of statistical improbabilities such as the sizable crowd addressed by Peter in Acts 4:4. He has also noted chronological difficulties whereby Luke "has Gamaliel refer to Theudas and Judas in the wrong order, and Theudas actually rebelled about a decade after Gamaliel spoke (5:36–7)"[13] 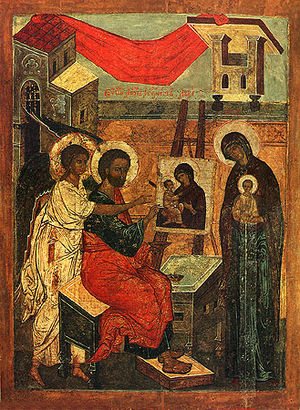 Luke the Evangelist painting the first icon of the Virgin Mary.

Luke as an artist

Christian tradition, starting from the 8th century, states that he was the first icon painter. He is said to have painted pictures of the Virgin Mary and Child, in particular the Hodegetria image in Constantinople (now lost). Starting from the 11th century a number of painted images were venerated as his autograph works, including for example, the Black Madonna of Częstochowa and Our Lady of Vladimir. He was also said to have painted Saints Peter and Paul, and to have illustrated a gospel book with a full cycle of miniatures.[22][23]

Late medieval Guilds of St Luke in the cities of Late Medieval Europe, especially Flanders, or the "Accademia di San Luca" (Academy of St. Luke) in Rome—imitated in many other European cities during the 16th century—gathered together and protected painters. The tradition that Luke painted icons of Mary and Jesus has been common, particularly in Eastern Orthodoxy. The tradition also has support from the Saint Thomas Christians of India who claim to still have one of the Theotokos icons that St. Luke painted and which St. Thomas brought to India.[24]

See also Gospel of Luke: Author and Acts of the Apostles: Authorship

Additionally, the earliest manuscript of the Gospel, dated circa AD 200, ascribes the work to Luke; as did Irenaeus, writing circa AD 180, and the Muratorian fragment from AD 170.[36] 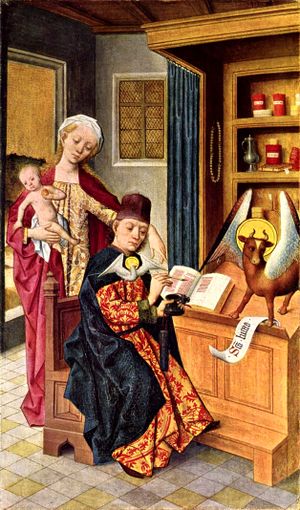 Luke and the Madonna, Altar of the Guild of St. Luke, Hermen Rode, Lübeck 1484. 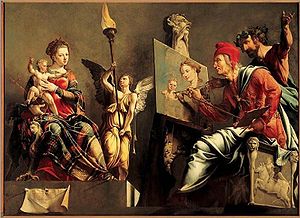 Luke paints the Madonna and the Baby Jesus, by Maarten van Heemskerck

The ox as symbol of St. Luke

In traditional depictions, such as paintings, evangelist portraits and church mosaics, St. Luke is often accompanied by an ox or bull, usually having wings. Sometimes only the symbol is shown, especially when in a combination of those of all Four Evangelists.[37][38]

The relics of St. Luke the Evangelist

Despot George of Serbia bought the relics from the Ottoman sultan Murad II for 30,000 gold coins.[39][40][not in citation given] After the Ottoman conquest of Bosnia, the kingdom's last queen, George's granddaughter Mary, who had brought the relics with her from Serbia as her dowry, sold them to the Venetian Republic.[41]

In 1992, the then Greek Orthodox Metropolitan Ieronymos of Thebes and Levathia (the current Archbishop of Athens and All Greece) requested from Bishop Antonio Mattiazzo of Padua the return of "a significant fragment of the relics of St. Luke to be placed on the site where the holy tomb of the Evangelist is located and venerated today". This prompted a scientific investigation of the relics in Padua, and by numerous lines of empirical evidence (archeological analyses of the Tomb in Thebes and the Reliquary of Padua, anatomical analyses of the remains, Carbon-14 dating, comparison with the purported skull of the Evangelist located in Prague) confirmed that these were the remains of an individual of Syrian descent who died between 416 BC and AD 72.[42] The Bishop of Padua then delivered to Metropolitan Ieronymos the rib of St. Luke that was closest to his heart to be kept at his tomb in Thebes, Greece.[39][40]

Thus, nowadays, the relics of St. Luke are so divided: