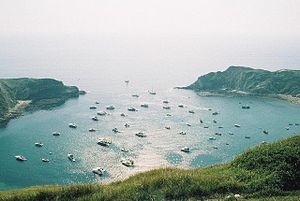 Lulworth Cove, viewed from the north

Lulworth Cove is a cove near the village of West Lulworth, on the Jurassic Coast World Heritage Site in Dorset, southern England. The cove is one of the world's finest examples of such a landform, and is a tourist location with approximately 500,000 visitors a year, of whom about 30% visit in July and August.[1][2] It is close to the rock arch of Durdle Door and other Jurassic Coast sites.

Lulworth Cove featured on the TV programme Seven Natural Wonders as one of the wonders of southern England.

The formation of Lulworth Cove

The cove has formed because there are bands of rock of alternating resistance running parallel to the shore (a concordant coastline). The seaward side the clays and sands have been eroded away. A narrow (less than 30 metre) band of Portland limestone rocks forms the shoreline. Behind this is a narrow (less than 50 metre) band of slightly less resistant Purbeck limestone. Behind this are 300–350 metres of much less resistant clays and greensands (Wealden clays, Gault and Upper Greensand).

Forming the back of the cove is a 250 metre wide band of chalk, which is considerably more resistant than the clays and sands, but less resistant than the limestones. The entrance to the cove is a narrow gap in the limestone bands. This was formed by a combination of erosional processes by wave action and the processes of weathering. The wide part of the cove is where the weak clays and greensands have been eroded. The back of the cove is the chalk, which the sea has been unable to erode as fast as it does not dissolve in the sea acids.

The unique shape of the cove is a result of wave diffraction. The narrow entrance to the cove ensures that as waves enter they bend into an arced shape this is shown clearly on the photograph.

The formation of Stair Hole

Stair Hole, less than half a mile away, is an infant cove which suggests what Lulworth Cove would have looked like a few hundred thousand years ago. The sea has made a gap in the Portland and Purbeck limestone here, as well as a small arch. The sea has made its way through to the Wealdon clays and begun eroding them. The clay shows obvious signs of slumping, and is eroding very rapidly. Stair Hole shows one of the best examples of limestone folding (the Lulworth crumple) in the world, caused by movements in the Earth's crust (tectonics) millions of years ago. Folding can also be seen at nearby Durdle Door and at Lulworth cove itself.

Map showing the location of Lulworth Cove within Dorset.

Lulworth acts as a gateway to this part of the Jurassic Coast. As well as the cove, across Hambury Tout (the large chalk hill to the west) is Durdle Door, a natural arch. To the east there is a fossilised forest. Lulworth is also close to Kimmeridge, famous for its rocky shore and fossils. The sea floor in and around the cove yields fossils, and oil sands beneath the sea bed form the largest British oil field outside the North Sea area, and contain the highest quality oil in Europe. Geologists and geographers have been interested in the area since the beginning of the 19th century, and in the 1830s the first serious study of the area took place. Since then the area has drawn Geology students from all over the world.

Purbeck suffers from trampling because of its many visitors and erosion from the sea. Management has been put in place to stop the coastline from being ruined, such as wooden steps and fences. These will keep people to a certain path and steps will reinforce the ground.

In 2001 the coast was granted World Heritage Site status by UNESCO. Experts at UNESCO have been working on preserving the shape of Lulworth Cove. Lulworth was one of a number of gateway villages on the coast with a Heritage Centre—part visitor centre, tourist information and natural history museum—which in 2002 received 418,595 visitors. Most of the area is privately owned by the Lulworth Estate, an estate held by the wealthy landowning family; The Welds.

Land to the east is owned by the Ministry of Defence and used for tank training, only open on weekends and holidays. The coast and land to the north and around the village is owned and managed by the Lulworth Estate (see Lulworth Castle). Each year, over 250,000 people walk across the hill linking the cove to Durdle Door.

Lulworth Cove featured on the TV programme Seven Natural Wonders (2005) as one of the wonders of Southern England. It also appeared in the Mike Leigh TV film Nuts in May (1976), and was used for the location filming in the Doctor Who serial The Curse of Fenric (1989) and in the film adaptation of the book World War Z (2013). Thomas Hardy also wrote a poem mentioning the location titled "At Lulworth Cove a Century Back."[3]

Lulworth Cove, viewed from the west