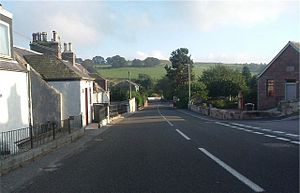 Entering Lumphanan from the north on the A980 road

Lumphanan (/lʌmˈfænən/ lum-FAN-ən; Scottish Gaelic: Lann Fhìonain) is a village in Aberdeenshire, Scotland located 25 miles from Aberdeen and 10 miles from Banchory. The village has its own primary school, "Lumphanan Primary" which has recently been extended, and its own pre-school, called "The Hut: Lumphanan Pre-school". There is a village corner shop, and a small tea-room called "The Meet Again Tea Room". There is one pub in the village called "The MacBeth Arms", there was another bar (a former hotel) located three miles from the village centre named "The Crossroads Hotel". Known in the local area as "The Cross", this closed in 2011.

Lumphanan is documented to be the site of the Battle of Lumphanan of 1057 AD, where Malcolm III of Scotland defeated Macbeth of Scotland. Macbeth was mortally wounded on the north side of the Mounth in 1057, after retreating with his men over the Cairnamounth Pass to take his last stand at the battle at Lumphanan.[1] The Prophecy of Berchán has it that he was wounded at Lumphanan and died at Scone, sixty miles to the south, some days later.[2] Mac Bethad's stepson Lulach mac Gille Coemgáin was installed as king soon after. The nearby Peel of Lumphanan was built in the early 13th century, and is a good surviving example of an earthwork castle, This site was used in the filming of the 1984 children's TV series " A Box of Delights" which was based on John Masefield's fantasy novel of the same name .[3]

The ruins of Corse Castle, the ancient seat of the Forbes family, stand some three miles to the north.

Along with a short, but challenging, nine-hole golf course, Lumphanan also has a recently refurbished multi sports court maintained by the Lumphanan Community Recreation Association (LCRA). Furthermore, there is a flood lit sports training area situated in the large play park, which is available for use by request. Lumphanan's summer league football team are nicknamed "The Wildcats".

The LCRA members also organise Scotland's first 10 km run of the year, known as the "Detox", that has been running since 2004 on 2 January, and will next be held on Jan 2nd 2016. The race starts and finishes in Lumphanan, but the mainly road route passes through the local countryside including a hill climb out of the village at the start and a section of farm track running next to the old Deeside Railway Line.