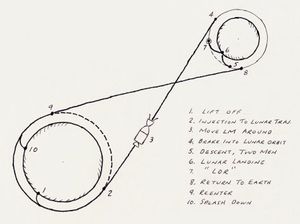 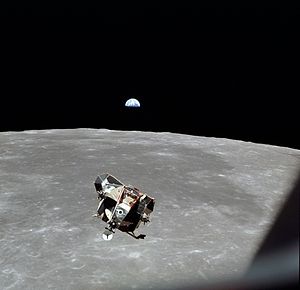 LOR is first known to have been proposed in 1916 by Ukrainian rocket theoretician Yuri Kondratyuk, as the most economical way of landing humans on the Moon. When NASA began actual work in 1961 on President John F. Kennedy's goal to achieve the first such landing by the end of the 1960s, LOR was proposed by Tom Dolan and championed by John C. Houbolt, but considered controversial, impractical, and possibly dangerous, because space rendezvous had never been done. However, Houbolt's persistence paid off, convincing NASA's management, and Administrator James E. Webb publicly announced in July 1962 that Apollo would utilize this method. Even then, Kennedy's Science Advisor Jerome Wiesner remained opposed to the method, and publicly criticized Webb.[1] As history has shown, the method worked, and allowed NASA to use only one Saturn V per lunar landing mission, something other landing options did not offer. 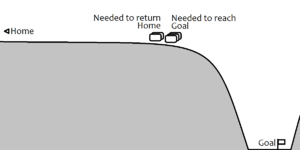 Metaphorical representation of the lunar gravity well, illustrating how resources needed only for the trip home don't have to be carried down and back up the "well"

Lunar orbit rendezvous was first known to be proposed in 1919 by Ukrainian and Soviet engineer Yuri Kondratyuk,[2] as the most economical way of landing a human on the Moon.[1]

When the Apollo Moon landing program was started in 1961, it was assumed that the three-man Command and Service Module combination (CSM) would be used for takeoff from the lunar surface, and return to Earth. It would therefore have to be landed on the Moon by a larger rocket stage with landing gear legs, resulting in a very large spacecraft (in excess of 100,000 pounds (45,000 kg)) to be sent to the Moon.

If this were done by direct ascent (on a single launch vehicle), the rocket required would have to be extremely large, in the Nova class. The alternative to this would have been Earth orbit rendezvous, in which two or more rockets in the Saturn class would launch parts of the complete spacecraft, which would rendezvous in Earth orbit before departing for the Moon. This would possibly include a separately launched Earth departure stage, or require on-orbit refueling of the empty departure stage.

Tom Dolan[3] proposed the alternative of lunar orbit rendezvous, which had been studied and promoted by Jim Chamberlin and Owen Maynard at the Space Task Group in 1960 early Apollo feasibility studies.[4] This mode allowed a single Saturn V to launch the CSM to the Moon with a smaller Lunar Excursion Module (LEM).[Note 1] When the combined spacecraft reaches lunar orbit, one of the three astronauts remains with the CSM, while the other two enter the LEM, undock and descend to the surface of the Moon. They then use the ascent stage of the LEM to rejoin the CSM in lunar orbit, then discard the LEM and use the CSM for the return to Earth. This method was brought to the attention of NASA Associate Administrator Robert Seamans by Langley Research Center engineer John C. Houbolt, who led a team to develop it.

Comparison of lunar lander sizes, from an early Langley study

The main advantage of LOR is the spacecraft payload saving, due to the fact that the propellant necessary to return from lunar orbit back to Earth need not be carried as dead weight down to the Moon and back into lunar orbit. This has a multiplicative effect, because each pound of "dead weight" propellant used later has to be propelled by more propellant sooner, and also because increased propellant requires increased tankage weight. The resultant weight increase would also require more thrust for landing, which means larger and heavier engines.[6]

The means of assembling the lunar spacecraft in Earth orbit were not well defined, and building the Nova rocket's 50-foot (15 m) diameter first stage exceeded the existing 1962 United States manufacturing capacity at the Michoud Assembly Facility in New Orleans, which was sufficient for the Saturn V's 33-foot (10 m) first stage. For this and other reasons, it has been argued that a super-complex Nova (or "Saturn 8") rocket possibly would not have been developed in time to make the 1970 lunar landing goal.

The LEM's design gave the astronauts a clear view of their landing site through observation windows approximately 15 feet (4.6 m) above the surface, as opposed to being on their backs in a Command Module lander, at least 40 or 50 feet (12 or 15 m) above the surface, able to see it only through a television screen.

Developing the LEM as a second manned vehicle provided the additional advantage of redundant critical systems (electrical power, life support, and propulsion), which enabled it to be used as a "lifeboat" to keep the astronauts alive and get them home safely in the event of a critical CSM system failure. This was envisioned as a contingency, but not made a part of the LEM specifications. As it turned out, this capability proved invaluable in 1970, when just such a critical failure occurred on the Apollo 13 mission when an oxygen tank failure disabled the Service Module.

Lunar-orbit rendezvous was considered risky as of 1962, because space rendezvous had not been achieved, even in Earth orbit. If the LEM could not reach the CSM, two astronauts would be stranded with no way to get back to Earth or survive re-entry into the atmosphere. The fear proved to be unfounded, as rendezvous was successfully demonstrated in 1965 and 1966 on six Project Gemini missions[Note 2] with the aid of radar and on-board computers. It was also successfully done each of the eight times it was tried on Apollo missions.[Note 3] 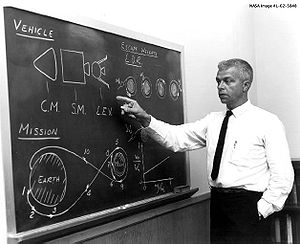 Dr. John Houbolt would not let the advantages of LOR be ignored. As a member of Lunar Mission Steering Group, Houbolt had been studying various technical aspects of space rendezvous since 1959 and was convinced, like several others at Langley Research Center, that LOR was not only the most feasible way to make it to the Moon before the decade was out, it was the only way. He had reported his findings to NASA on various occasions but felt strongly that the internal task forces (to which he made presentations) were following arbitrarily established "ground rules." According to Houbolt, these ground rules were constraining NASA's thinking about the lunar mission—and causing LOR to be ruled out before it was fairly considered.

In November 1961, Houbolt took the bold step of skipping proper channels and writing a private letter, nine pages long, directly to Robert C. Seamans, the associate administrator. "Somewhat as a voice in the wilderness," Houbolt protested LOR's exclusion. "Do we want to go to the Moon or not?" the Langley engineer asked. "Why is Nova, with its ponderous size simply just accepted, and why is a much less grandiose scheme involving rendezvous ostracized or put on the defensive? I fully realize that contacting you in this manner is somewhat unorthodox," Houbolt admitted, "but the issues at stake are crucial enough to us all that an unusual course is warranted."[7][8]

It took two weeks for Seamans to reply to Houbolt's extraordinary letter. The associate administrator agreed that "it would be extremely harmful to our organization and to the country if our qualified staff were unduly limited by restrictive guidelines." He assured Houbolt that NASA would in the future be paying more attention to LOR than it had up to this time.

In the following months, NASA did just that, and to the surprise of many both inside and outside the agency, the dark horse candidate, LOR, quickly became the front runner. Several factors decided the issue in its favor. First, there was growing disenchantment with the idea of direct ascent due to the time and money it was going to take to develop the huge Nova rocket. Second, there was increasing technical apprehension over how the relatively large spacecraft demanded even by Earth-orbit rendezvous would be able to maneuver to a soft landing on the Moon. As one NASA engineer who changed his mind explained:

The business of eyeballing that thing down to the Moon really didn't have a satisfactory answer. The best thing about LOR was that it allowed us to build a separate vehicle for landing.

The first major group to break camp in favor of LOR was Robert Gilruth's Space Task Group, which was still located at Langley but was soon to move to Houston. The second to come over was the Von Braun team at the Marshall Space Flight Center in Huntsville, Alabama. Then these two powerful groups of converts, along with the original true believers at Langley, persuaded key officials at NASA Headquarters, notably Administrator James Webb, who had been holding out for direct ascent, that LOR was the only way to land on the Moon by 1969. With the key players inside NASA lined up behind the concept, Webb approved LOR in July 1962.[9] The decision was officially announced at a press conference on July 11, 1962.[10] President Kennedy's science adviser, Jerome Wiesner, remained firmly opposed to LOR.[11]

A robotic lunar orbit rendezvous is planned for use by the Chinese Chang'e 5 lunar sample return mission scheduled in 2017.[12] The American Golden Spike Company plans on landing humans on the Moon in 2020 using LOR.[13]