The phase and libration of the Moon for 2013 at hourly intervals, with music, titles and supplemental graphics.

Animation of the Moon as it cycles through its phases, as seen from the Northern Hemisphere. The apparent wobbling of the Moon is known as libration. The apparent change in size is due to the eccentricity of the lunar orbit.
This video provides an illustration of how the Moon passes through its phases — a product of its orbit, which allows different parts of its surface to be illuminated by the Sun over the course of a month. The camera is locked to the Moon as the Earth rapidly rotates in the foreground.

The lunar phase or phase of the moon is the shape of the illuminated (sunlit) portion of the Moon as seen by an observer on Earth. The lunar phases change cyclically as the Moon orbits the Earth, according to the changing positions of the Moon and Sun relative to the Earth. The Moon and the Earth are tidally locked, therefore the same lunar surface always faces Earth. This face is variously sunlit depending on the position of the Moon in its orbit. Therefore, the portion of this hemisphere that is visible to an observer on Earth can vary from about 100% (full moon) to 0% (new moon). The lunar terminator is the boundary between the illuminated and darkened hemispheres. Each of the 4 lunar phases is roughly 7 days (~7.4 days) each but varies slightly due to lunar apogee and perigee. Aside from some craters near the lunar poles such as Shoemaker, all parts of the Moon see around 14.77 days of sunlight, followed by 14.77 days of "night" (the "dark side" of the Moon is a reference to radio communication darkness, not visible light darkness).

Phases of the moon 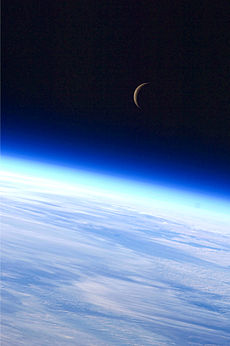 A crescent moon above Earth's horizon is featured in this image photographed by an Expedition 24 crew member in 2010.

In Western culture, the four principal lunar phases are new moon, first quarter, full moon, and third quarter (also known as last quarter). These are the instants when the Moon's apparent geocentric celestial longitude minus the Sun's apparent geocentric celestial longitude is 0°, 90°, 180° and 270°, respectively. The lunar cycle is 29.53 days and each of these phases is roughly 7.38 days long, but the durations vary slightly because the Moon's orbit is slightly elliptical, and thus its speed in orbit is not constant.

The eight principal and intermediate phases are given the following names, in sequential order: 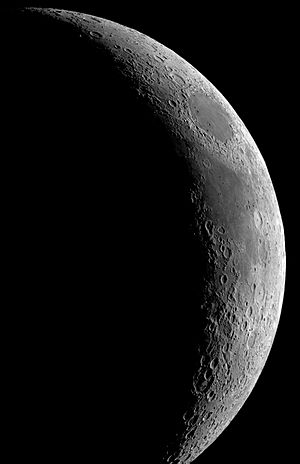 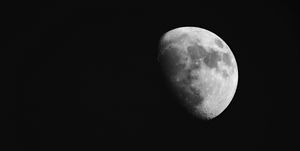 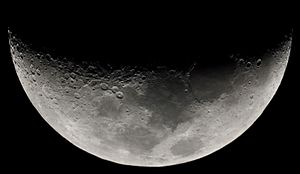 Upward-opening crescent Moon, as seen after sunset or before sunrise from the tropics. 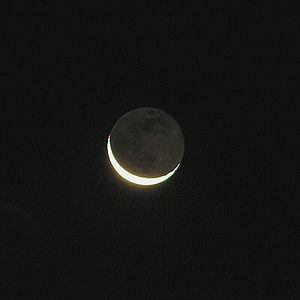 Earthshine "The old Moon in the new Moon's arms".

Phases of the Moon, as seen looking southward from the Northern Hemisphere. The Southern Hemisphere will see each phase rotated through 180°. The upper part of the diagram is not to scale, as the Moon is much farther from the Earth than shown here.

When the Sun and Moon are aligned on the same side of the Earth, the moon is "new", and the side of the Moon facing Earth is not illuminated by the Sun. As the moon waxes (the amount of illuminated surface as seen from Earth is increasing), the lunar phases progress through new moon, crescent moon, first-quarter moon, gibbous moon, and full moon. The moon is then said to wane as it passes through the gibbous moon, third-quarter moon, crescent moon and back to new moon. The terms "old moon" and "new moon" are not interchangeable. The "old moon" is a waning sliver (undetectable to the naked eye) until the moment it begins to wax, at which point it becomes new again.[1] Half moon is often used to mean the first- and third-quarter moons, while the term 'quarter' refers to the extent of the moon's cycle around the Earth, not its shape.

When a sphere is illuminated on one hemisphere and viewed from a different angle, the portion of the illuminated area that is visible will have a two-dimensional shape defined by the intersection of an ellipse and circle (where the major axis of the ellipse coincides with a diameter of the circle). If the half-ellipse is convex with respect to the half-circle, then the shape will be gibbous (bulging outwards, Origin: 1350–1400; Middle English < Latin gibbōsus humped, equivalent to gibb ( a ) hump + -ōsus -ous[2] ), whereas if the half-ellipse is concave with respect to the half-circle, then the shape will be a crescent. When a crescent Moon occurs, the phenomenon of Earthshine may be apparent, where the night side of the Moon faintly reflects light from the Earth.

The above descriptions of the lunar phases apply for observers at temperate or high latitudes on the Earth. Observers in tropical latitudes see the Moon with its terminator apparently horizontal during the morning and evening. The crescent Moon can open upward or downward, with the "horns" of the crescent pointing up or down, respectively. When the Sun appears above the Moon in the sky, the crescent opens downward; when the Moon is above the Sun, the crescent opens upward. The crescent Moon is most clearly and brightly visible when the Sun is below the horizon, which implies that the Moon must be above the Sun, and the crescent must open upward. This is therefore the orientation in which the crescent Moon is most often seen from the Earth's tropics. The waxing and waning crescents look very similar. The waxing crescent appears in the western sky in the evening, and the waning crescent in the east, in the morning.

When the Moon, as seen from Earth, is a narrow crescent, the Earth as seen from the Moon is almost fully lit by the Sun. Often, the part of the Moon that is not directly lit by the Sun is sufficiently brightly lit by light reflected from the Earth to be easily visible from Earth. This phenomenon is called "earthshine", and is sometimes picturesquely described as "the old moon in the new moon's arms".

Non-Western cultures may use a different number of Moon phases, for example traditional Hawaiian culture has a total of 30 different Moon phases.[3] 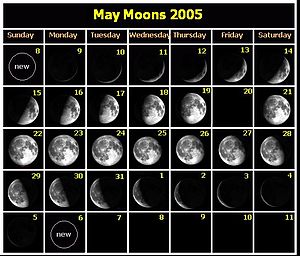 The average calendrical month, which is ​1⁄12 of a solar year, is about 30.44 days, while the Moon's phase (synodic) cycle repeats on average every 29.53 days. Therefore, the timing of the Moon's phases shifts by an average of almost one day for each successive month. (Lunar year=354 days.)

→ a multilanguage interactional Lunar phase calendar (2015) on our Sisterproject Commons.

Photographing the Moon's phase every day for a month, starting in the evening after sunset, and repeating approximately 25 minutes later each successive day, ending in the morning before sunrise, would create a composite image like the example calendar from May 8, 2005, to June 6, 2005 here in the left. There is no picture on May 20 since a picture would be taken before midnight on May 19, and after midnight on May 21. Similarly, on a calendar listing moon rise or set times, some days will appear to be skipped. When the Moon rises just before midnight one night it will rise just after midnight the next (so too with setting). The 'skipped day' is just a calendar artifact and not the Moon behaving strangely. The moon has a predictable orbit every month.

Each of the 4 lunar phases lasts approximately 7 days (~7.4 days), but varies slightly due to lunar apogee and perigee.

The approximate age of the moon, and hence the approximate phase, can be calculated for any date by calculating the number of days since a known new moon (such as January 1, 1900 or August 11, 1999) and reducing this modulo 29.530588853 (the length of a synodic month). The difference between two dates can be calculated by subtracting the Julian Day Number of one from that of the other, or there are simpler formulae giving (for instance) the number of days since December 31, 1899. However, this calculation assumes a perfectly circular orbit and therefore may be incorrect by several hours (it also becomes less accurate the larger the difference between the required date and the reference date); it is accurate enough to use in a novelty clock application showing moon phase, but specialist usage taking account of lunar apogee and perigee requires a more elaborate calculation.[citation needed]

The Earth subtends an angle of about two degrees, when seen from the Moon. This means that an observer on Earth who sees the Moon when it is close to the eastern horizon sees it from an angle that is about two degrees different from the line of sight of an observer who sees the Moon on the western horizon. The Moon moves about 12 degrees around its orbit per day, so, if these observers were stationary, they would see the phases of the Moon at times that differ by about one-sixth of a day, or four hours. But in reality the observers are on the surface of the rotating Earth, so someone who sees the Moon on the eastern horizon at one moment sees it on the western horizon about 12 hours later. This adds an oscillation to the apparent progression of the lunar phases. They appear to occur more slowly when the Moon is high in the sky than when it is below the horizon. The Moon appears to move jerkily, and the phases do the same. The amplitude of this oscillation is never more than about four hours, which is a small fraction of a month. It does not have any obvious effect on the appearance of the Moon. However, it does affect accurate calculations of the times of lunar phases.

It might be expected that once every month, when the Moon passes between Earth and the Sun during a new moon, its shadow would fall on Earth causing a solar eclipse, but this does not happen every month. Nor is it true that during every full moon, the Earth's shadow falls on the Moon, causing a lunar eclipse. Solar and lunar eclipses are not observed every month because the plane of the Moon's orbit around the Earth is tilted by about five degrees with respect to the plane of Earth's orbit around the Sun (the plane of the ecliptic). Thus, when new and full moons occur, the Moon usually lies to the north or south of a direct line through the Earth and Sun. Although an eclipse can only occur when the Moon is either new (solar) or full (lunar), it must also be positioned very near the intersection of Earth's orbit plane about the Sun and the Moon's orbit plane about the Earth (that is, at one of its nodes). This happens about twice per year, and so there are between four and seven eclipses in a calendar year. Most of these events are quite insignificant; major eclipses of the Moon or Sun are less frequent.