A map of Gaul in the 1st century BC, showing the location of Lutetia and relative positions of the Celtic tribes.

Lutetia (also Lutetia Parisiorum in Latin, Lukotekia before, in French Lutèce) was a town in pre-Roman and Roman Gaul. The Gallo-Roman city was a forerunner of the re-established Merovingian town that is the ancestor of present-day Paris.

The city was referred to as "Λουκοτοκία" by Strabon, "Λευκοτεκία" by Ptolemeus and "Lutetia" by Julius Caesar. The origin of this name is uncertain.

The name may contain the Celtic root *luco-t-, which means "mouse" and -ek(t)ia, meaning "the mice" and which can be found today in the Breton word logod, the Welsh llygod, and the Irish luch.[1]

Alternatively, it may derive from another Celtic root, luto- or luteuo-, which means "marsh" or "swamp" and which survives today in the Gaelic loth ("marsh") and the Breton loudour ("dirty").[2] As such, it would be related to other place names in Europe including Lutudarum (Derbyshire, England); Lodève (Luteua) and Ludesse (France); and Lutitia (Germany).

The oppidum of the Gallic Parisii was on the Ile de la Cité, which at that time was smaller than it is today and was linked to the riverbanks by two bridges. It appears to have been occupied by the Parisii ca. 250-225 B.C.[3]

Lutetia became the chief city of the Gallic civitas Parisioruin in Lugdunensis Quarta, becoming Parisius in the 5th c. A.D. Roman Lutetia was founded above the flood-prone point where the Bièvre, a tributary of the Seine, flows into that river. It was centered on the slopes of the hill later dedicated to Saint Genevieve, on the left bank of the Seine, (which became known as the Latin Quarter in the Middle Ages when the Sorbonne University was founded.) Outlying suburbs on an island across from the confluence, the Île de la Cité, became the Merovingian and modern centre of Paris.

In 52 BC, a year or so before the end of the Gallic Wars, the Parisi destroyed the bridges to the Ile de la Cité. However the garrison led by Vercingetorix's lieutenant Camulogenus, whose army camped on the Mons Lutetius (where the Panthéon is now situated), fell to the Roman military forces led by Titus Labienus, one of Julius Caesar's lieutenants. The Romans crushed the Gauls at nearby Melun and took control of Lutetia. 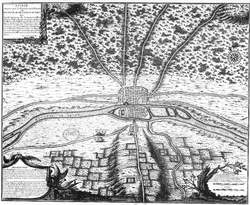 The Gallo-Roman city was rebuilt on the island but developed mainly on the hill on the south bank of the river (the Montagne Sainte-Geneviève) where starting in the 2nd century AD, public works and monuments were constructed. The northern low-lying plain was easily flooded.[3] Under Roman rule, Lutetia was thoroughly Romanised with a population estimated at around 8,000. It did not have a great deal of political importance - the capital of its province, Lugdunensis Senona, was Agedincum (modern Sens, Yonne).

The regular grid-plan of Roman Lutetia marked it as the city, in the Gallo-Roman sense. The north-south axis was dictated by the need to cross the marshy riverbanks in the shortest possible distance; several routes converged at the bridgehead. The discovery of ancient paved roads, the established boundaries of the main monuments—the forum at the top of the hill, theatre, baths— even the path of certain medieval roads show that the Roman city was laid out with a module of precisely 300 Roman feet. On the Left Bank, the Rue St-Jacques and on the Right Bank, the Rue St-Martin still follow the Roman main axis (cardo maximus).

Dendrochronological study of wooden pilings beneath the lowest stratum of the Roman north-south axis date the road's construction after 4 AD, more than fifty years after the Roman pacification of the region.

An aqueduct 26 km in length, with a flow rate estimated at 2000 cubic meters a day, provided the city with spring water collected from several points. To bridge the Bièvre valley at Arcueil-Cachan, a bridge was required, whose piers and ruined arches, still discernible, gave rise to the toponym Arcueil.

It was Christianised in the 3rd century, traditionally when St Denis became the city's first bishop. The process was not entirely peaceful – in about 250 A.D. St Denis and two companions were arrested and decapitated on the hill of Mons Mercurius, where Roman foundations have been found, thereafter known as Mons Martyrum (Martyrs' Hill, or Montmartre).

After a barbarian attack in 275 a surrounding wall was built on the Ile de la Cité with a fortified keep.[3]

Lutetia was renamed Paris in 360 A.D.,[4] taking its name from the Gallic Parisii tribe name. The name had already been used for centuries as an adjective ("Parisiacus"). The legend of the Breton city of Ys suggests a different, if less likely, origin.

Around the same time, the city quarter on the left Seine bank, which housed the baths, the theatres and the amphitheatre, was gradually abandoned with the population being concentrated on the island, which received new fortifications. The classical theater began to be dismantled during the 4th century.

For the history of the city after its renaming, see the article on Paris. 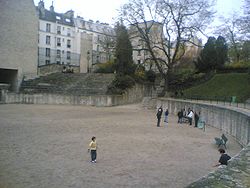 The Arènes de Lutèce today, in the 5th arrondissement of Paris

Very little is now left of the ancient city although more is currently being discovered. In a small park on high ground in the Latin Quarter of the Left Bank, tucked behind apartment blocks, one may still see some remains of the 1st-century amphitheatre (Arènes de Lutèce). The amphitheatre, built into the slope of the hillside outside the city itself, is commonly referred to as Les Arènes de Lutèce. It was one of the largest such structures in Gaul. 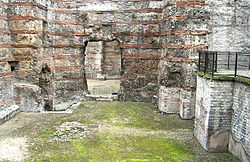 Furthermore, there are the remains of public baths at the Musée de Cluny (frigidarium with vault intact and caldarium) and the Early Christian archeological crypt under the Notre Dame forecourt, now Place of Pope John-Paul II.

In May 2006, a road dating back 2,000 years was discovered at the site of Lutetia during expansion of the campus on University of Pierre and Marie Curie. The National Institute of Preventive Archaeological Research is currently excavating the site.

During the excavation, remains of private houses containing Roman baths and heated floors were found. Over the following few weeks, however, archaeologists were to pull up the ruins to make way for a research center. Everyday items like flowerpots, bronze chains, ceramics, and drawer handles were dug out. Many of these items were expected to be on exhibit in museums shortly after. Archaeologists acknowledge that this was the first site discovered from the reign of Roman emperor Augustus (27 BC-14 AD).

As far as details on the ancient builders, archeologists are in disagreement over the character of the neighborhood's builders. Some believe that a former Gallic aristocracy, recruited by Rome to govern the colony settled in the area. The new Roman governors and noblemen did build the city in a Roman style, but certainly used materials found locally. Most of this is assumed because they had to have been wealthy enough to own a Roman bath found in one of the homes. A privately owned Roman bath was considered to be a status symbol among Roman citizens.

It is presumed that this particular dwelling was built in the first decade of the 1st century, at the end of emperor Augustus's reign, away from the administrative and commercial center of the Roman city. This neighborhood stood on the Roman main street (called "cardo maximus") that was originally paved for the Romans to cross the nearby Seine River and is today the Rue St. Jacques in Paris' fashionable 5th district.

Conservation of the findings

Due to Parisian official conservation policy, when construction work in Paris is planned, archaeologists review all building permits and the construction company must ask for official opinion to determine whether the site is of historical value. If the site proves significant in historical value, an excavation permit is then issued. One of the problems concerning the potential conservation of this site is the inherent destruction incurred by the excavation process, due to the need for expansion of the university facilities to help in the research of ancient and historic Paris.

Lutèce Falco 1991 is also the name of one of Paris Saint-Germain F.C.'s notable former Ultra groups.

A documentary series of four 52 minutes episodes "PARIS, A CAPITAL TALE" was produced in 2012[5]