London Luton Airport (IATA: LTN, ICAO: EGGW), previously called Luton International Airport,[3] is an international airport located 1.5 nautical miles (2.8 km; 1.7 mi) east[1] of the town centre in the Borough of Luton in Bedfordshire, England and is 30.5 NM (56.5 km; 35.1 mi) north[1] of Central London. The airport is 2 mi (3.2 km) from Junction 10a of the M1 motorway. It is the fourth-largest airport serving the London area after Heathrow, Gatwick and Stansted, and is one of London's six international airports along with London City and Southend.

In 2014, just under 10.5 million passengers passed through the airport, a record total for Luton making it the sixth busiest airport in the UK.[2] The airport serves as a base for EasyJet, Monarch, Thomson Airways and Ryanair. The vast majority of the routes served are within Europe, although there are some charter and scheduled routes to destinations in Northern Africa and Asia.

An airport was opened on the site on 16 July 1938 by the Secretary of State for Air, Kingsley Wood.[3] During World War II, it was a base for Royal Air Force fighters. Situated where the valley of the River Lea cuts its way through the north-east end of the Chiltern Hills, the airport occupies a hill-top location, with a roughly 40 m (130 ft) drop-off at the western end of the runway[4][5][6]

Following the war, the land was returned to the local council which continued activity at the airport as a commercial operation. Percival Aircraft had its factory at the airport until the early 1960s.

It became the operating base for charter airlines such as Autair (which went on to become Court Line), Euravia (now Thomson Airways, following Euravia's change of name to Britannia Airways and subsequent merger with First Choice Airways), Dan-Air and Monarch. In 1972, Luton Airport was the most profitable airport in the country. It suffered a severe setback in August 1974 when major package holiday operator Clarksons and its in-house airline Court Line (which also operated local bus services) were liquidated.[3]

In the 1980s the airport was seeing a decline in customer numbers; this was due to lack of reinvestment and Stansted. The council responded to lobbying and focused again on developing the airport, first by operating the airport at arms length via an independent management team. As a result, necessary infrastructure work was undertaken. The next 15 years saw a process of updating, including the opening of a new international terminal, an automated baggage handling facility, a new control tower with updated air traffic control systems, a new cargo centre and runway upgrades.

The original runways had been grass tracks 18/36 and 06/24, and then a concrete runway 08/26. By the end of the 80s, there was only one runway, 08/26. The 18/36 grass runway had disappeared under a landfill, while 06/24 had effectively become a taxiway. To remain a viable airport it was necessary to update airfield services, and achieve CAT3 status. This meant updating ILS; glidepath and localiser and removing the hump in the runway; even a six-foot person could not see one end of the runway from the other. The hump was removed by building up layers at the end of the runway; this was done over 72 successive nights between October 1988 and February 1989, with the height being raised 90 mm on one particular night. During the course of this work, the airport would re-open for flights during the day.

While developing the basic infrastructure, various business partners were courted and business models were considered. The process envisaged a cargo centre, an airport railway station, and people mover from station to airport terminal (hence the unused underpass parallel to the road as you approach the terminal).

In 1990, the airport was renamed London Luton Airport to re-emphasise the airport's proximity to the UK capital. In 1991, another setback occurred when Ryanair, which had flown from the airport to Ireland for a number of years, transferred its London operating base to Stansted. Later in the 90s, MyTravel Group began charter flights from the airport, using the Airtours brand and new low-cost scheduled flights from Debonair and EasyJet, the latter making Luton its base.[3]

In August 1997, to fund an £80 million extension of the airport, the council issued a 30-year concession contract to a public private partnership consortium, London Luton Airport Operations Limited, a partnership of Airport Group International (AGI) and Barclays Private Equity. AGI was a specialist airport management and development company once owned by Lockheed Martin Corp. of USA and Barclays P E was a Barclays Bank subsidiary. In 1999 AGI was sold to TBI plc and in 2001 Barclays also sold its shares in Luton to TBI plc.[3]

The main feature of the development phase in 1998 was a £40 million terminal made from aluminium and glass, based on an original design by Foster and Partners. The new terminal, which was officially opened in November 1999 by Queen Elizabeth II and Prince Philip, houses 60 check-in desks, baggage and flight information systems and a wide range of shops, restaurants and bars.[3] 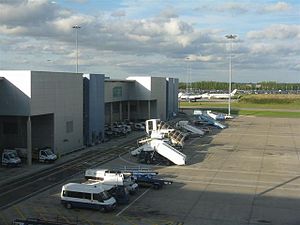 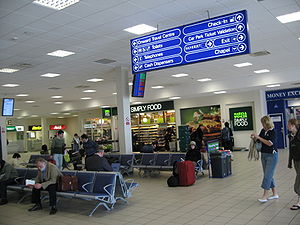 The airport possesses a single runway, running roughly east to west (08/26), with a length of 2,160 m (7,087 ft)[1] at an elevation of 526 ft (160 m). The runway is equipped with an Instrument Landing System (ILS) rated to Category IIIB, allowing the airport to continue operating in conditions of poor visibility.[7][8] All the airport facilities lie to the north of the runway. The terminal and aprons have a somewhat unusual layout, with ground-side access to the terminal being via a road (which goes under the taxiway) to a bus station, drop off area, taxi rank and short term car park on the runway side of the terminal building. There are approximately 60 stands available for aircraft. All of these stands are located on the northern side of the terminal building, away from the runway and connected to it by a 'U' shaped set of taxiways and aprons that together encircle the terminal.[4][5]

The northern side of the U-shaped apron is ringed by a continuous line of hangars and other buildings, emphasising the fact that Luton is a major maintenance base for several airlines including Thomson Airways, Monarch and EasyJet. By contrast to the heavily built up apron area, the airport's southern boundary is entirely rural with only a few isolated farm buildings and houses close to the airport boundary.[4][5]

The airport remains in municipal ownership, owned by Luton Borough Council but managed by the private sector London Luton Airport Operations Limited (LLAOL). London Luton Airport has a Civil Aviation Authority Public Use Aerodrome Licence (Number P835) that allows flights for the public transport of passengers or for flying instruction. An indicator of the importance of the airport to the economy of Luton is that Luton is reported to have the highest number of taxicabs per head of population in the United Kingdom.[9]

EasyJet's head office is Hangar 89 (H89), a building located on the grounds of London Luton Airport; the hangar, a former Britannia Airways/TUI facility, is located 150 metres (490 ft) from EasyLand, the previous headquarters of EasyJet. Hangar 89, built in 1974, has 30,000 sq ft (2,800 m2) of office space and can house two aircraft the size of an Airbus A320 or Boeing 737 at one time. When EasyJet received H89, it had a 1970s style office setup. EasyJet modernised the building and painted it orange.[10]

In addition Monarch Airlines and Thomson Airways have their head offices located at the airport.[11]

Development plans and the future

In 2004 the airport management announced[12] that they supported the government plans to expand the facilities to include a full-length runway and a new terminal.[13] However, local campaign groups, including Luton and District Association for the Control of Aircraft Noise (LADACAN)[14] and Stop Luton Airport Plan (SLAP)[15] opposed the new expansion plans, for reasons including noise pollution and traffic concerns; LADACAN also claimed that various sites, including Someries Castle, a Scheduled Monument, would be threatened by the expansion. On 6 July 2007, it was announced that the owners of London Luton Airport had decided to scrap plans to build a second runway and new terminal for financial reasons.[16]

In order for the airport to expand further, the Department for Transport (DfT) advised the airport authority to use the airport site more efficiently. The DfT supports plans to extend the runway from its current 2,160 m (7,087 ft) length to 3,000 m (9,843 ft) and increase the length of the taxiway. A full-length runway would increase airlines' operational flexibility by enabling the use of aircraft that have a greater payload capacity and longer range than is currently possible. A longer taxiway would maximise runway use by reducing the need for taxiing aircraft to cross or move along the runway.

The airport lies a few miles away from the M1 motorway, which runs southwards to London, northwards to Leeds and connects to the M25 motorway. There is a short stay car park adjacent to the terminal, together with medium and long term on airport car parks to the west and east of the terminal respectively and linked to the terminal by shuttle buses. Pre-booked off airport parking is also available from several independent operators. 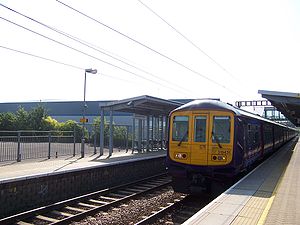 Luton Airport Parkway was built in 1999 to serve the airport. It is located on the Midland Main Line from London St Pancras station.

Under the Thameslink Programme, capacity at the station is due to increase significantly. By 2012, the original operator First Capital Connect planned to run twelve-car trains, rather than the maximum then of eight carriages.

A shuttle bus service connects the station to the airport, a distance of just over a mile. There is a charge for the service. To provide additional capacity, LLAOL have contracted the shuttle service to FCC (since 20 January 2008), whose parent company FirstGroup have invested £1.3 million in a fleet of four articulated buses labelled 'StreetCars'. The new buses are 18 metres long and can accommodate up to 115 passengers plus baggage.[29]

Plans have been approved to replace the shuttle buses with a segregated tracked transit system.[30] This has been met with large-scale local opposition.

UK's London Luton Airport revealed ambitious plan to build a new direct railway line to reduce the journey time from central London to the airport to 20min. By providing this facility to increase passenger footsteps from current 12 million to at least 18 million by 2026.[31]

London Oyster Cards and contactless cards will be accepted on Thameslink services in early 2016 to Luton Airport.[32]

Local buses connect Luton Airport with Luton town centre and other nearby places. Direct bus services to London are operated by both Green Line Coaches and EasyBus (with services to and from Victoria Coach Station and Liverpool Street station). National Express coaches link the airport to London Stansted Airport as well as destinations in the Midlands and north of England.[33]

First Capital Connect FTR buses providing a link between the airport and Luton Airport Parkway railway station. This service runs every 10 minutes during the day and is branded as Train2Plane.