Johann Ludwig Graf[2] Schwerin von Krosigk, born Johann Ludwig von Krosigk and known as Lutz von Krosigk (22 August 1887 – 4 March 1977) was a German senior government official who served as Minister of Finance of Germany from 1932 to 1945 and Leading Minister of the German Reich (Chancellor) in May 1945.

A non-partisan moderate conservative, he was appointed to the post by Franz von Papen in 1932. At the request of President Paul von Hindenburg, he continued in that office under Kurt von Schleicher and Adolf Hitler. During May 1945, after the suicides of Hitler and his designated successor Josef Goebbels, he also served in the historically unique position of Leading Minister of the German Reich, the equivalent of a Chancellorship, in the short-lived Flensburg government of President Karl Dönitz. Schwerin von Krosigk also held the essentially nominal offices of Foreign Minister and Finance Minister in the provisional government that controlled only a small, progressively shrinking portion of Germany, due to the rapid advance of the Allied forces who finally dissolved it and arrested its members.

Besides Adolf Hitler himself, Schwerin von Krosigk and Wilhelm Frick were the only members of the Third Reich's cabinet to serve continuously from Hitler's appointment as Chancellor until his death. By receiving the golden NSDAP Party Badge from Adolf Hitler given for honor on 30. January 1937 he got member of the NSDAP (membership number: 3.805.231) He also joined the academy of German Law [4] 1937

At the 1949 Ministries Trial, he was convicted of war crimes and sentenced to 10 years in jail, but was granted amnesty in 1951. He later worked as an author and publicist.

He was born Johann Ludwig von Krosigk in Rathmannsdorf, Anhalt, Germany to a father from an old noble family of Anhalt and a mother who was a daughter and heiress of a Count (Graf) von Schwerin, a member of the same family as Richardis of Schwerin, Queen of Sweden, queen consort of Sweden from 1365 until 1377. He studied law and political science at Halle, at Lausanne and as a Rhodes Scholar at Oriel College, Oxford. During the First World War, he served in the German Army, attaining the rank of Lieutenant, and was awarded the Iron Cross. On 7 February 1918, during the war, Krosigk had married Baroness Ehrengard von Plettenberg (1895–1979), and with her he had four sons and five daughters. In 1922, he became an Oberregierungsrat (senior government official) and in 1929, a ministerial director and head of the budget department at the finance ministry. In 1931, he joined the department of reparations payments, formed to deal with the reparations Germany still owed the Allied Powers after the Great War. 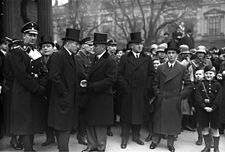 The cabinet in February 1934. Von Krosigk second from left.

Von Krosigk was appointed Minister of Finance by Franz von Papen in 1932, and continued in that office at the request of President Paul von Hindenburg under Kurt von Schleicher and throughout the period of Nazi rule. Several members of his family took part in assassination attempts against Adolf Hitler. Von Krosigk was rarely seen in public appearances, and Hitler did not have regular cabinet meetings (the cabinet didn't meet at all after 1938). He was thus more an administrator of the finance ministry rather than a political figure.

On 1 May 1945, after Goebbels's suicide, Reichspräsident Karl Dönitz asked Schwerin von Krosigk to become the Chancellor (Reichskanzler) of the Acting Government. He declined but did accept the position of "Leading Minister". 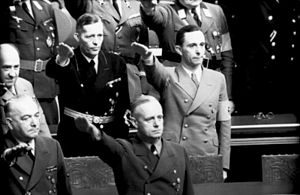 Krosigk and Goebbels salute at the Reichstag

Rapidly advancing Allied forces limited the jurisdiction of the new German government to an area around Flensburg near the Danish border, where Dönitz's headquarters were located, along with Mürwik. Accordingly, this administration was referred to as the Flensburg government. Dönitz and Schwerin von Krosigk attempted to negotiate an armistice with the Western allies while continuing to resist the Soviet Army. On 7 May 1945, Dönitz authorized the signature of the German Instrument of Surrender to the Allies, which took place in Rheims before General Dwight D. Eisenhower; Dönitz would later authorize the German military to sign another instrument of surrender in Berlin, in a ceremony presided over by the Soviets. The speech by Winston Churchill announcing victory to the British people is evidence of a de facto recognition of the Flensburg Government's authority, for Churchill stated that the surrender was authorized by "Grand Admiral Dönitz, the designated Head of the German State". However, after the unconditional surrender, the Flensburg government was mostly treated as inconsequential by the western military command. On 23 May 1945, the Flensburg Government was dissolved by order of the Supreme Allied Commander and its members arrested as prisoners of war. 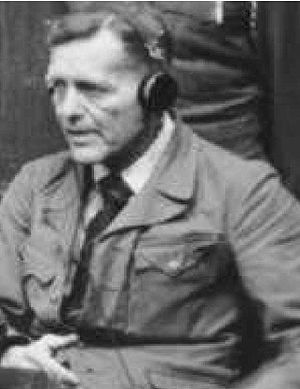 Von Krosigk was tried at Nuremberg along with other leading members of the German government during the time of Nazi government. Found guilty in the Ministries Trial in 1949, he was sentenced to ten years' imprisonment, but was released during an amnesty in 1951.

In later years, Schwerin von Krosigk wrote several books on economic policy and two versions of his memoirs. In a broadcast to the German people on 2 May 1945, he became one of the first commentators to refer to an "Iron Curtain" across Europe, a phrase he had picked up from an article by Joseph Goebbels[3] and which was later made famous by Winston Churchill.

His elder daughter, Felicitas-Anita Grafin Schwerin von Krosigk, is the mother of Alternative for Germany Member of the European Parliament Beatrix von Storch.