From Infogalactic: the planetary knowledge core
(Redirected from Luvians)
Jump to: navigation, search

Luwian (/ˈluːiən/; sometimes spelled Luvian, rarely Luish) is an ancient language or group of languages of the Anatolian branch of the Indo-European language family. The two varieties of Luwian are named for the scripts that they were written in: Cuneiform Luwian (CLuwian) and Hieroglyphic Luwian (HLuwian). As to whether these were one language or two, there is no consensus.

Several other languages in Anatolia have been identified as being most similar to Luwian, which suggests that they belong in their own branch with CLuwian and HLuwian. Some linguists name the branch "the Luwian Group" or just "Luwian" and, in that sense, Luwian means all of the Luwian languages. Other linguists, following Melchert, prefer to use Luwic for the branch and Luwian for CLuwian and HLuwian.[2] Proto-Luwian can mean the common ancestor of the two, or the common ancestor of the several although, in the tree-naming conventions, if the branch is to be called Luwic, its ancestor should be Proto-Luwic or Common Luwic. 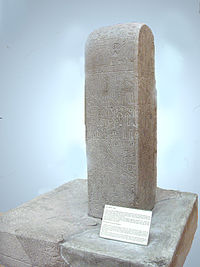 Luwian is closely related to Hittite.

Luwian has been deduced as one of the likely candidates for the language spoken by the Trojans.[3]

Some fringe hypotheses rejected by mainstream historical linguistics are (related to Lemnian), a Thracian connection, and a Greek connection.

According to James Mellaart, the earliest Indo-Europeans in northwest Anatolia were the horse-riders who came to this region from the north and founded tr:Demircihöyük (Eskisehir Province) in Phrygia c. 3000 BCE. They were ancestors of the Luwians who inhabited Troy II, and spread widely in the Anatolian peninsula.[4]

He cited the distribution of a new type of wheel-made pottery, Red Slip Wares, as some of the best evidence for his theory. According to Mellaart, the proto-Luwian migrations to Anatolia came in several distinct waves over many centuries. The current trend is to see such migrations as mostly peaceful, rather than military conquests.[5]

Luwian was among the languages spoken during the 2nd and 1st millennia BC by groups in central and western Anatolia and northern Syria.[6] In the Old Hittite version of the Hittite Code, some, if not all, of the Luwian-speaking areas were called Luwiya. Widmer (2007) has argued that the Mycenaean term ru-wa-ni-jo, attested in Linear B, refers to the same area.[7] The general consensus among scholars is that Luwian was spoken—to varying degrees—across a large portion of western Anatolia, including Troy (Wilusa), the Seha River Land (Sēḫa ~ Sēḫariya, i.e., the Greek Hermos river and Kaikos valley), and the Mira-Kuwaliya kingdom with its core being the Maeander valley.[8] This is suggested by, among other things, a corrupt late copy of the Hittite Code in which the geographical term Luwiya is replaced with Arzawa,[9] a western Anatolian kingdom corresponding roughly with Mira and the Seha River Land.[10] In the post-Hittite era, the region of Arzawa came to be known as Lydia (Assyrian Luddu, Greek Λυδία), where the Lydian language was in use. The name Lydia has been derived from the name Luwiya (Lydian *lūda- < *luw(i)da- < luwiya-, with regular Lydian sound change y > d), which further argues in favour of the location of Luwiya in the west.[11]

Beginning in the 14th century BC, Luwian-speakers came to constitute the majority in the Hittite capital Hattusa.[12] It appears that by the time of the collapse of the Hittite Empire ca. 1180 BC, the Hittite king and royal family were fully bilingual in Luwian. Long after the extinction of the Hittite language, Luwian continued to be spoken in the Neo-Hittite states of Syria, such as Milid and Carchemish, as well as in the central Anatolian kingdom of Tabal that flourished in the 8th century BC.[13]

Cuneiform Luwian is a term that refers to the corpus of Luwian texts attested in the tablet archives of Hattusa; it is essentially the same cuneiform writing system used in Hittite.[14] In Laroche's Catalog of Hittite Texts, the corpus of Hittite cuneiform texts with Luwian insertions runs from CTH 757–773, mostly comprising rituals.[15] Cuneiform Luwian texts are written in several dialects, of which the most easily identifiable are Kizzuwatna Luwian, Istanuwa Luwian, and Empire Luwian.[16] The last dialect represents the vernacular of Hattusan scribes of the 14th–13th centuries BC and is mainly attested through Glossenkeil words in Hittite texts.

Hieroglyphic Luwian is a term that refers to the corpus of Luwian texts written in a native script, known as Anatolian hieroglyphs.[17][18] Once thought to be a variety of the Hittite language, "Hieroglyphic Hittite" was formerly used to refer to the language of the same inscriptions, but this term is now obsolete. The dialect of Luwian hieroglyphic inscriptions appears to be either Empire Luwian or its descendant Iron Age Luwian.

The first report of a monumental inscription dates to 1850, when an inhabitant of Nevşehir reported the relief at Fraktin. In 1870, antiquarian travellers in Aleppo found another inscription built into the south wall of the Al-Qaiqan Mosque. In 1884, Polish scholar pl (Marian Sokołowski) discovered an inscription near Köylütolu, in western Turkey. The largest known inscription was excavated in 1970 in Yalburt, northwest of Konya. Luwian hieroglyphic texts contain a limited number of lexical borrowings from Hittite, Akkadian, and Northwest Semitic; the lexical borrowings from Greek are limited to proper nouns, although common nouns borrowed in the opposite direction do exist.[19]

Luwian has numerous archaisms and so is important both to Indo-European linguists and to scholars of the Bronze Age Aegean.

Luwian is used to support the view that the Proto-Indo-European language had three distinct sets of velar consonants:[20]

Luwian has also been enlisted for its verb kalut(t)i(ya)-, which means "make the rounds of" and is probably derived from *kalutta/i- "circle".[21] It has been argued[22] that this derives from a proto-Anatolian word for "wheel", which in turn would have derived from the common word for "wheel" found in all other Indo-European families. The wheel was invented in the 5th millennium BC and, if kaluti does derive from it, then the Anatolian branch left PIE after its invention (so validating the Kurgan hypothesis as applicable to Anatolian). However, kaluti need not imply a wheel and so need not have been derived from a PIE word with that meaning. The IE words for a wheel may well have arisen in those other IE languages after the Anatolian split.

Given the prevalence of -assa place names and words scattered around all sides of the Aegean Sea, this possessive suffix was sometimes considered evidence of a shared non-Indo-European language or an Aegean Sprachbund preceding the arrivals of Luwians and Greeks. It is, however, possible to account for the Luwian possessive construction as a result of case attraction in the Indo-European noun phrase.[23] The possessive adjectives are pervasive in Kizzuwatna Luwian cuneiform texts, but in Iron Age texts in hieroglyphic transmission they compete with the inherited genitives.[24] The special form of possessive adjectives with plural possessor is restricted to Kizzuwatna Luwian and probably represents a result of its structural interference with Hurrian.[25]