From Infogalactic: the planetary knowledge core
Jump to: navigation, search
"Luxembourgish" and "Luxembourgian" redirect here. For the people of Luxembourg, see Luxembourgers.

Luxembourgish, Luxemburgish[3] (/ˈlʌksəmˌbɜːrɡᵻʃ/)[3] or Letzeburgesch[4] (/ˌlɛtsᵊbɜːrˈɡɛʃ/ or /ˈlɛtsᵊˌbɜːrɡᵻʃ/)[4] (Luxembourgish: Lëtzebuergesch) is a West Germanic language that is spoken mainly in Luxembourg. Worldwide, about 390,000 people speak Luxembourgish.[1]

While it can be considered a standardized variety (i.e., a dialect with a written form) of German, its official use in the state of Luxembourg and the existence of a separate regulatory body[5] removed Luxembourgish, at least in part, from the domain of the Dachsprache Standard German. Despite the lack of a sharp boundary between Luxembourgish and the neighboring German dialects, this has led several linguists (from Luxembourg as well as Germany) to regard it as a separate, yet closely related language.[citation needed]

Luxembourgish belongs to the West Central German group of High German languages and is the primary example of a Moselle Franconian language.

Luxembourgish is the national language of Luxembourg and one of three administrative languages, alongside French and German.[6]

Luxembourgish is also spoken in the Arelerland region of Belgium (part of the Province of Luxembourg) and in small parts of Lorraine in France.

In the German Eifel and Hunsrück regions, and in Lorraine, similar local Moselle Franconian dialects of German are spoken. Furthermore, the language is spoken by a few descendants of Luxembourg immigrants in the United States, and another similar Moselle Franconian dialect is spoken by ethnic Germans long settled in Transylvania, Romania (Siebenbürgen).

Moselle Franconian dialects outside the Luxembourg state border tend to have far fewer French loan words, and these mostly remain from the French revolution.

Increasing mobility of the population and the dissemination of the language through mass media such as radio and television are leading to a gradual standardisation towards a "Standard Luxembourgish" through the process of koineization.[7]

There is no distinct geographic boundary between the use of Luxembourgish and the use of other closely related High German dialects (for example Lorraine Franconian); it instead forms a dialect continuum of gradual change.

Spoken Luxembourgish is relatively hard to understand for speakers of German who are generally not familiar with Moselle Franconian dialects (or at least other West Central German dialects). However, they can usually read the language to some degree. For those Germans familiar with Moselle Franconian dialects, it is relatively easy to understand and speak Luxembourgish as far as the everyday vocabulary is concerned.[7] However, the large number of French loanwords in Luxembourgish may hamper communication about certain topics, or with certain speakers (who use surpassingly many French loanwords).

There is no intelligibility between Luxembourgish and French or any of the Romance dialects spoken in the adjacent parts of Belgium and France.[7]

Erna Hennicot-Schoepges, President of the Christian Social People's Party of Luxembourg 1995–2003, was active in promoting the language beyond Luxembourg's borders.

A number of proposals for standardising the orthography of Luxembourgish can be documented, going back to the middle of the 19th century. There was no officially recognised system, however, until the adoption of the "OLO" (ofizjel lezebuurjer ortografi) on 5 June 1946.[8] This orthography provided a system for speakers of all varieties of Luxembourgish to transcribe words the way they pronounced them, rather than imposing a single, standard spelling for the words of the language. The rules explicitly rejected certain elements of German orthography (e.g., the use of "ä" and "ö",[9] the capitalisation of nouns). Similarly, new principles were adopted for the spelling of French loanwords.

This proposed orthography, so different from existing "foreign" standards that people were already familiar with, did not enjoy widespread approval.

A more successful standard eventually emerged from the work of the committee of specialists charged with the task of creating the Luxemburger Wörterbuch, published in 5 volumes between 1950 and 1977. The orthographic conventions adopted in this decades-long project, set out in Bruch (1955), provided the basis of the standard orthography that became official on 10 October 1975.[10] Modifications to this standard were proposed by the Conseil permanent de la langue luxembourgeoise and adopted officially in the spelling reform of 30 July 1999.[11] A detailed explanation of current practice for Luxembourgish can be found in Schanen & Lulling (2003).

The Luxembourgish alphabet consists of the 26 Latin letters plus three letters with diacritics: "é", "ä", and "ë". In loanwords from French and Standard German, other diacritics are usually preserved:

Like many other varieties of Western High German, Luxembourgish has a rule of final n-deletion in certain contexts. The effects of this rule (known as the "Eifel Rule") are indicated in writing, and therefore must be taken into account when spelling words and morphemes ending in ⟨n⟩ or ⟨nn⟩. For example:

The consonant inventory of Luxembourgish is quite similar to that of Standard German.[12]

Luxembourgish has three genders (masculine, feminine, and neuter), and has three cases (nominative, accusative, and dative). These are marked morphologically on determiners and pronouns. As in German, there is no morphological gender distinction in the plural.

The forms of the articles and of some selected determiners are given below:

As seen above, Luxembourgish has plural forms of en ("a, an"), namely eng in the nominative/accusative and engen in the dative. They are not used as indefinite articles, which—as in German and English—do not exist in the plural, but they do occur in the compound pronouns wéi en ("what, which") and sou en ("such"). For example: wéi eng Saachen ("what things"); sou eng Saachen ("such things"). Moreover, they are used before numbers to express an estimation: eng 30.000 Spectateuren ("some 30,000 spectators").

Distinct nominative forms survive in a few nominal phrases such as der Däiwel ("the devil") and eiser Herrgott ("our Lord"). Rare examples of the genitive are also found: Enn des Mounts ("end of the month"), Ufanks der Woch ("at the beginning of the week"). The functions of the genitive are normally expressed using a combination of the dative and a possessive determiner: e.g. dem Mann säi Buch (lit. "to the man his book", i.e. "the man's book"). This is known as a periphrastic genitive, and is a phenomenon also commonly seen in dialectal and colloquial German, and in Dutch.

The forms of the personal pronouns are given in the following table (unstressed forms appear in parentheses):

The 2pl form is also used as a polite singular (like French vous, see T-V distinction); the forms are capitalised in writing:

Like most varieties of colloquial German, but even more invariably, Luxembourgish uses definite articles with personal names. They are obligatory and not to be translated:

De Serge ass an der Kichen. ("Serge is in the kitchen.")

A feature Luxembourgish shares with only some western dialects of German is that women and girls are most often referred to with forms of the neuter pronoun hatt:

Dat ass d'Nathalie. Hatt ass midd, well et vill a sengem Gaart geschafft huet. ("That's Nathalie. She is tired because she has worked a lot in her garden.")

Luxembourgish morphology distinguishes two types of adjective: attributive and predicative. Predicative adjectives appear with verbs like sinn ("to be"), and receive no extra ending:

Attributive adjectives are placed before the noun they describe, and change their ending according to the grammatical gender, number, and case:

Interesting to note is how the definite article changes with the use of an attributive adjective: feminine d goes to déi (or di), neuter d' goes to dat, and plural d' changes to déi.

The comparative in Luxembourgish is formed analytically, i.e. the adjective itself is not altered (compare the use of -er in German and English; tall → taller, klein → kleiner). Instead it is formed using the adverb méi: e.g. schéin → méi schéin

Predicative modification uses either the same adjectival structure or the adverbial structure am+ -sten: e.g. schéin → am schéinsten:

Some common adjectives have exceptional comparative and superlative forms:

Several other adjectives also have comparative forms. However, these are not commonly used as normal comparatives, but in special senses:

Luxembourgish exhibits "verb second" word order in clauses. More specifically, Luxembourgish is a V2-SOV language, like German and Dutch. In other words, we find the following finite clausal structures:

Du solls net esou vill Kaffi drénken. (lit. "You should not so much coffee drink.")

These rules interact so that in subordinate clauses, the finite verb and any non-finite verbs must all cluster at the end. Luxembourgish allows different word orders in these cases:

This is also the case when two non-finite verb forms occur together:

Luxembourgish (like Dutch and German) allows prepositional phrases to appear after the verb cluster in subordinate clauses:

Luxembourgish has borrowed many French words. For example, the name for a bus driver is Buschauffeur (also Dutch), which would be Busfahrer in German and chauffeur de bus in French.

Some words are different from Standard German but have equivalents in German dialects. An example is gromperen (potatoes – German: Kartoffeln). Other words are exclusive to Luxembourgish. 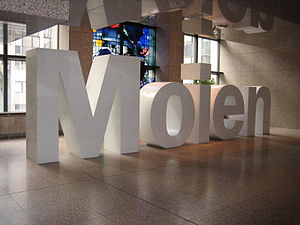 Approx. 2 meters high installation in the Justus-Lipsius building during the Luxembourgish EU-Presidency, first half of 2005

Listen to the words below. (help·info) Note: Words spoken in sound clip do not reflect all words on this list.

Neologisms in Luxembourgish include both entirely new words, and the attachment of new meanings to old words in everyday speech. The most recent neologisms come from the English language in the fields of telecommunications, computer science, and the Internet.

Recent neologisms in Luxembourgish include:[21]

Between 2000 and 2002, Luxembourgish linguist Jérôme Lulling compiled a lexical database of 125,000 word forms as the basis for the very first Luxembourgish spellchecker (Projet C.ORT.IN.A).

The LaF (Lëtzebuergesch als Friemsprooch – Luxembourgish as a Foreign Language) is a set of four language proficiency certifications for Luxembourgish and follows the ALTE framework of language examination standards. The tests are administered by the Institut National des Langues Luxembourg.[22]