Three of the 100 largest luxury yachts – Lady Moura, Dilbar, and Lady Anne – within the port of Porto Cervo, Sardinia

A luxury yacht over 24 metres (79 ft) is considered as a "superyacht".[citation needed] 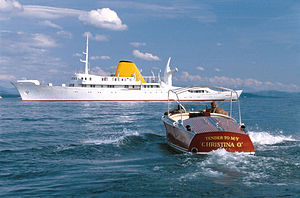 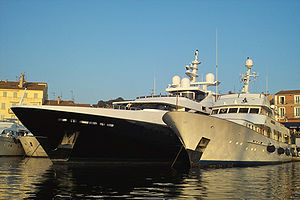 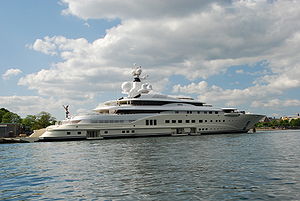 The yacht Pelorus in Copenhagen 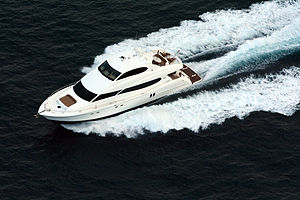 Between 1997 and 2008 there was a massive growth in the number, size, and popularity of large private or super luxury yachts in the 24-to-70-metre (79 to 230 ft) size range. Luxury yachts, megayachts, or superyachts typically have no real home port as such, although a yacht must be registered in a port of the country where its flag state is registered. Popular flag state registrars for large yachts are Cayman Islands, Marshall Islands, Isle of Man, and the British Virgin Islands, among others. (Many times the yacht will have never been to these ports.) They are particularly bountiful in the Mediterranean Sea in summer and the Caribbean Sea in winter. Many can be chartered (rented) for sums of up to 1 million Euro for a week. Up to 1,500 large yachts may be available to charter in a season in the Mediterranean.[citation needed] The arrival of large commercial ships specially outfitted to take multiple large yachts across the Atlantic ocean has created a much larger charter market in the Caribbean than ever before.[citation needed] Yachts will dock in a port of choosing while the crew does maintenance work and waits for owners or guests to arrive. The vessels then will do short cruises with the owners and/or guests aboard. Typical destinations in Spain and the French and Italian Rivieras include Cannes, Antibes, St. Tropez, Monte Carlo, Portofino, Porto Cervo, Puerto Banús, Puerto Portals, and Palma, Majorca, although increasingly luxury yachts are cruising in more remote areas of the world. Antigua is one of the main ports in the Windward Islands of the Caribbean and hosts a Charter Show at the beginning of the winter season.

While the demand for new luxury yachts has slowed somewhat since 2009, 2011 has seen a small rebound with launches from many of the top yards. The 163.5 metres (536 ft) M/Y Eclipse, was built by Blohm + Voss for Russian businessman Roman Abramovich[2] and the 180 metres (590 ft) Azzam launched in 2013 are the largest private yachts in the world. Luxury boatbuilding and yacht charter companies are predominantly based in Western Europe and the United States but are also increasingly found in Australia, New Zealand, Asia, and Eastern Europe.

In 2015 the market has had a similar year to 2014 with some large deliveries such as the 125m Golden Odyssey by Lurssen or the 101m Feadship Symphony but no significant sign of change for the brokerage market with 2015 being a slower year than 2014. 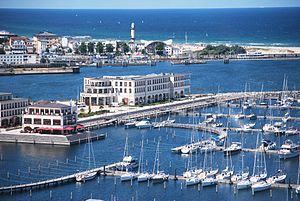 Some yachts are used exclusively by their private owners, others are operated all year round as charter businesses, and a large number are privately owned but available for charter part-time. The weekly charter rate of luxury yachts around the world ranges from tens of thousands to over a million dollars/euros. Expenses of approximately 25–30%, such as food, fuel, and berthage are charged as an extra as well as a customary 15–20% crew gratuity for good service. The luxury yacht charter industry functions effectively because private yacht owners mitigate their running costs with charter income as well as keeping their yachts and crew in top running order. Conversely, private charterers charter yachts (rather than owning them) because it is generally considered to be less expensive, and less hassle, than owning a yacht and it also provides them with extra choice related to yacht type, location and crew. 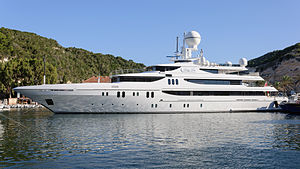 The superyacht M/Y Lady Lau built in 2010 by Codecasa

Yachts from 24 metres (79 ft) and up qualify for design awards, but given the number of yachts exceeding 100 feet, many set the minimum length for a superyacht higher. A 45-to-50-metre (148 to 164 ft) yacht, the smallest with a generally accepted claim to superyacht status, will usually be a three-decker with cabins for 10–12 guests and for a crew of a similar size. The accommodation on this type of yacht is typically as follows:

A 50-metre yacht will have one or more luxury yacht tenders for reaching shore and other "toys" which may include a speed boat or sailing boat, personal water craft, windsurfing and diving equipment and a banana boat. Up-to-date yachts have multiple televisions and satellite communications.

The number of very large yachts has increased rapidly since the 1990s and increasingly only yachts above around 65 metres (213 ft) stand out among other luxury yachts. Yachts of this size are almost always built to individual commissions and cost tens of millions of dollars (most superyachts cost far more than their owners' homes on land, even though those homes are likely to be among the largest and most desirable). A yacht of this size usually has four decks above the waterline and one or two below. It is likely to have a helicopter landing platform. Apart from additional guest cabins, which are likely to include one or more "VIP suites" besides the owner's suite, extra facilities compared to a 50-metre (160 ft) yacht will include some or all of the following: indoor jacuzzis, sauna and steam rooms, a beauty salon, massage and other treatment rooms, a medical centre, a disco (usually the same space as the sky lounge or salon, transformed into a dance area when furnishings are moved aside and special lighting activated), a cinema, plunge pool (possibly with a wave-maker), a playroom, and additional living areas such as a separate bar, secondary dining room, private sitting rooms or a library. There will be more boats and "toys" than there are on a 50-metre (160 ft).

There is no industry-wide standard for the difference between motor yacht, superyacht, and megayacht. However it has been generally accepted by naval architects and industry executives that superyachts range from 120 ft (36m) up to 200 ft (60m+), and megayachts are over 200 ft (60m+). The only legal distinction is between yachts above 24 meters and below as those above 24 meters are viewed as a yacht and therefore must have a permanent crew on boat.[3] 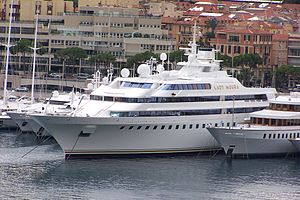 Giga yachts is a hyperbolic term that first emerged in reference to megayachts, a.k.a. superyachts, in the mid-2000s. Power & Motoryacht magazine's popular Megayachts forum, which was online from the early 1990s to 2012 (now offline), had an ongoing discussion about the term, since luxury yachts at that time were getting larger and larger, exceeding 300 feet in length (about 91 meters). The words megayacht and superyacht mean the same thing, despite the term superyacht being more prevalent outside of U.S. these days.[citation needed] In fact, the word megayacht was coined first, ascribed to famed yacht broker George Nicholson by Power & Motoryacht in one of its first issues in 1985 as well as subsequent media reports elsewhere.[4] As of 2012[update], yachts above 100 metres (330 ft) are still rare but increasingly more common, with an estimated 32 on the water.[2] They typically have five decks above the water line and one below. They incorporate many of the same features that smaller megayachts do, such as helicopter landing areas and swimming pools, though given their extra length, they also feature helicopter hangars and miniature submarines.

The crew required to operate a large or super luxury yacht can number from 8 members for a 120 ft yacht, to a complement of 70 for a yacht the size of Eclipse. The crew is made up of a Captain, Chief Engineer, Engineer/s, First Mate, Officer, Bosun, Chef/s, Crew Chef, Deckhand/s and Stewardess/Steward/s. Luxury yachts are maintained by crew all year round but will often scale down to a skeleton crew during the seasons that the owners are not on board and no charters are booked. Most crew members live on board and are paid a monthly salary, with most living expenses covered by the owner. Live on board crews do not pay rent, food, electricity or water bills. All luxury yachts have crew areas below deck, which consist of a crew mess, crew cabins and laundry. While most crew cabins contain bunk beds, there are Captains and Chief Engineers who, on the larger yachts, have their own cabins. There are no set hours that crew members work each week. The hours depend greatly on how often the owners are on board, how often it is chartered and on what hours the Captain sets when there are no guests on board. The crew can be hired through crew agencies or websites like Find a Crew.